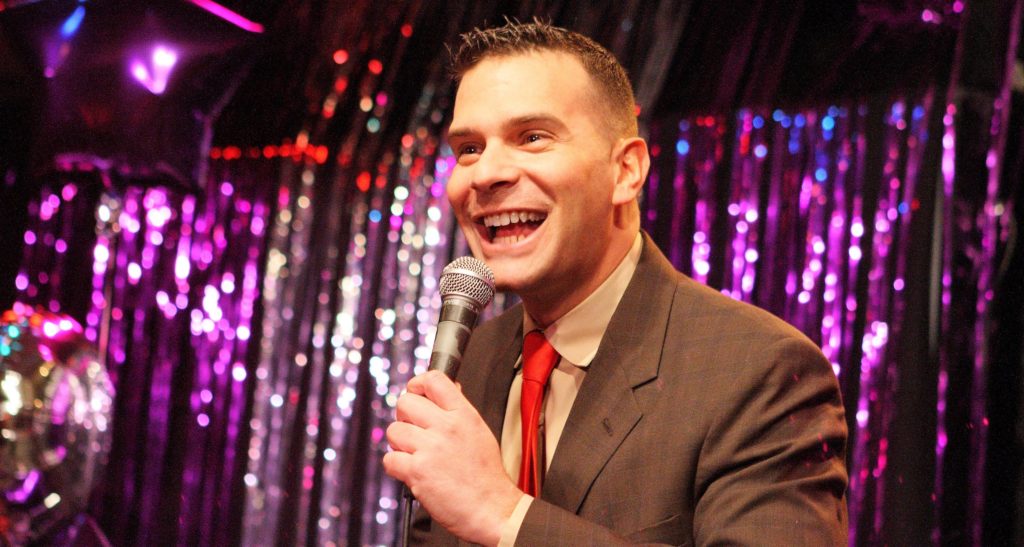 Comedian Adam Sank has a joke about HIV that left me gasping when he told it to me, the kind of story that has a punchline that mortifies you with shock and a naughty, guilty delight. I would tell you this joke right away but you might get the wrong idea about Adam. There are other things you should know about him first.

Adam was a frustrated musical theater geek in college, made all the more frustrating because he wasn’t the greatest singer or dancer. But he did have confidence. What he needed was the right platform.

When Adam graduated with a journalism degree from Columbia in 1996, cable news was changing. MSNBC and FOX News were both launching their networks and filling positions as fast as they could.

“As far as I knew, they would be the same as CNN,” Adam told me in our phone interview. “Having a liberal or conservative bias didn’t occur to me. I had no idea what FOX would become.”

During his fast rise as a show producer, Adam found out soon enough what FOX News was all about. “It was a toxic, stressful, unhappy place for me,” he said. “Not only because of the poison they were pumping out in our culture, but my job behind the scenes was incredibly stressful.”

Adam needed a release, so he quit Fox News in 2002 and gathered the nerve to do standup comedy in 2003. He admits he didn’t have the experience of his peers but he was a good storyteller. “The only things I knew to talk about,” Adam told me, “was being gay, my mother, and working at the Fox News Channel.”

There is a sweetness in Adam’s stage presence that might be just innocent enough to wipe away the anxiety of a straight nightclub audience listening to a gay man, even if Adam mercilessly teases any good looking straight dude within striking distance. He’s naughty but never crude. He wants to tickle your funny bone, not break it.

In 2008, Adam was featured in one of those behind-the-scenes profiles of contestants on the show Last Comic Standing that usually ensures their rise through the competition. “They followed me around all day,” Adam recalls, “and they even showed my set.” He was cut anyway. “The producer told me I was this close to making it,” he explains, “which I think will be the title of my memoir. This Close to Making It.”

Since then, Adam has weathered the fickle winds of comedic destiny, continuing his standup at civic events, on gay pride stages, on the air waves of his weekly radio show, and as a steady guest on Tell Me Everything with John Fugelsang on Sirius. 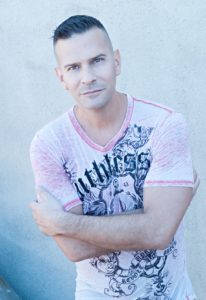 Not every life event has an easy punchline, however. Growing up in the shadow of AIDS in the 1980’s and 90’s definitely left a mark on Adam. “I was really paranoid about getting it,” he admits. “I got tested constantly. I avoided dating or hooking up with people who had it. I was safe-ish,” he adds, in one of those famous-last-words admissions that make HIV educators scream into their testing kits.

In November of 2004, Adam took the new 20-minute HIV test in a free clinic during his lunch hour. “The guy comes back and tells me my test came back positive, very matter-of-factly. And I say, ‘Is this real?’ and he says, ‘This is real. And there really is nothing more to say.’ And I’m thinking, ‘There’s a lot more to say!’ The tester worked at a clinic and maybe he didn’t have a lot of experience.”

Adam went to his physician’s office to get blood work done right away. “I was crying like a crazy person in the waiting room,” he remembers. “Then I called a few close friends and we got together at my apartment and watched Postcards from the Edge.”

Adam is completely aware that his sexual choices, rooted in fear and skewed by sexual desire, did him no favors. “What I wanted was to have my cake and eat it, too,” he says. “What I really wanted was to have sex without condoms.” He believed his casual sero-sorting – limiting his partners to others who claimed to be HIV negative – would protect him. It is a deeply flawed strategy, as we now know, to rely solely on assumptions and assurances.

“I felt dirty and disgusting and polluted,” Adam says about the months following his diagnosis. In the decade since, two things have radically changed the landscape for Adam and so many others: the advent of PrEP and the proven fact that people with HIV who are undetectable cannot infect their sex partners.

“My policy is to be 100% transparent,” Adam says about his dating life today. “If they ask, I tell.” But he doesn’t feel obligated to share his status, especially with casual hookups he meets in his home city of New York. “We usually have a conversation, but a lot of guys don’t even ask the question these days. They assume I am either on medication or on PrEP.”

While this story from the dating front lines might make some prevention purists cringe, it is a fairly common snapshot of gay male hookup habits today. PrEP makes it impossible to become infected with HIV. Being undetectable makes it impossible to transmit HIV. Gay men are adopting these tools and cruising accordingly, and that includes talking about HIV a little less. Prevention is, as always and at last, purely in the hands of each of us and not reliant on what a casual sex partner does or does not reveal.

Don’t expect to find much talk of HIV in Adam’s act, either. “I try to find humor in every part of life,” Adam says, but he leaves the gallows humor to his time with friends, like when they re-wrote the score of Annie as an HIV musical, featuring songs like “We’ll Get a New Strain for Christmas.” Still, Adam can count on one hand the number of times he has mentioned HIV on stage.

Which brings us to his HIV joke.

“A friend of mine texted me during the holidays,” his story goes, “and said, ‘I want you to come to my house for a white elephant party.’ I wrote back and said, ‘What’s that? A bunch of well hung guys sitting around doing coke?’ And he said, ‘No, a white elephant party is when you show up with something awful that someone else gave you and you give it to someone else at the party.’ And I said, “Oh, like HIV? Because I have been to those parties and they are fun.’”

The joke got a mixture of groans and cheers when Adam had the nerve to tell it at a gay event. “Of course, I’ve never been to such a party,” he explains. “The humor is in the total wrongness of it. I would love to see another, edgier comedian do the joke, but I can’t necessarily pull it off.”

They say comedy is danger. For Adam Sank, the relative danger of HIV – for himself and others – has been a moving target since he was diagnosed more than a decade ago. Rather than find that target in his comedy, Adam is sticking to friendlier, more accessible topics.

HIV might be risky, but a hilarious story about your mom can absolutely kill.