AIDS, Love and Desperation at the Louise Hay Ride

Previous Next
AIDS, Love and Desperation at the Louise Hay Ride 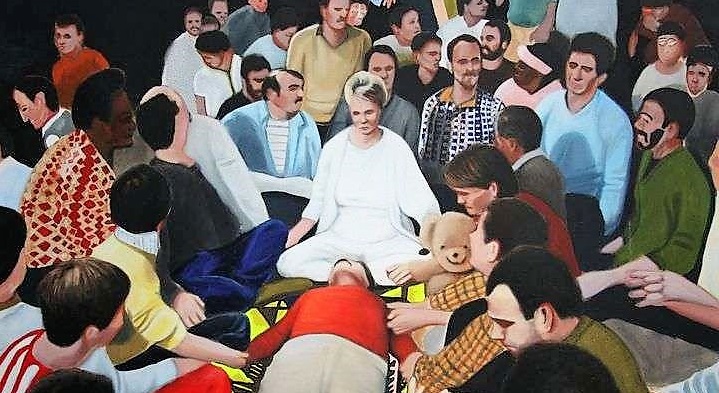 “The One You Need To Let Go Of The Most,” by Jason Fritz & Matt Momchilov, based on images from the Louise Hay Ride.

The hall, an auditorium in a West Hollywood park, was filled to overflowing. Hundreds of people, nearly all of them gay men, were crushed together in folding chairs, seated on the floor, or crowded in overflow areas by the doors. I sat fidgeting in my seat, a first-timer to this event, and beside me was my brother, Richard. His lover, Emil, diagnosed with AIDS for a couple of years now, was busy shaking hands and networking with the throng.

On the floor of the hall, a single chair and microphone stood waiting for the evening’s host.

“I see a lot of regulars here tonight,” Richard said. I scanned the crowd. It was as if someone had turned the lights up in a busy gay bar, with men milling about and introducing themselves and casting flirtatious glances.

With more careful study, however, the bar analogy disintegrated. Dozens of the men were most definitely not up for cruising. They sat in wheelchairs on the edge of the gathering, bundled in blankets, leaning up to greet friends. Many others were on their feet but wore telltale purple blotches on their faces and arms.

It was West Hollywood’s hottest ticket in 1987. The Louise Hay Ride. 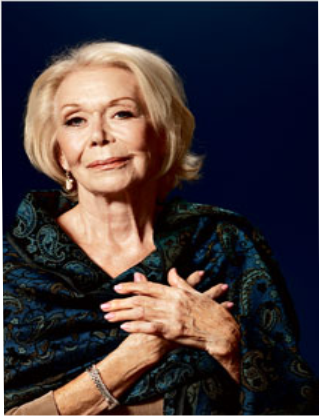 Louise Hay had become a new age phenomenon as a woman who had reportedly claimed to have cured herself of cancer. Her message of self-love and unconditional acceptance—of our lives and other people—resonated like a beacon to the frightened gay men of Los Angeles. Her weekly meetings drew the ill and their loved ones who wished to share with each other their common, horrific circumstance.

There was genuine happiness and a sense of peace among many in the group, although others wore strained smiles, grinning through their anguish and trying to maintain.

We’re ghosts, I feared. We are all ghosts here.

The crowd had begun to quiet themselves and Emil took his chair. He is really taking the bull by the horns, I thought. If it is true that the emboldened ones would survive AIDS, then Emil will surely live forever.

The program began simply enough, with Louise Hay stepping to the microphone and taking a seat. She spoke reassuringly to the sea of hope and disease before her, providing initial words of comfort, and then asked that announcements be given. A new support group was starting somewhere, one man said, and another announced a new experimental treatment at a local hospital. Dozens of pens clickity-clicked open to note the details.

Louise Hay pointed to a stage, just behind us, to remind the crowd that healing sessions would be performed directly after her talk. I looked over my shoulder at half a dozen massage tables, with volunteer healers standing by, quartz crystals hanging from their necks. “Don’t worry, Mark,” Richard whispered in my ear, “we never stay for that.”

The hall was a three-ring circus of spirituality, metaphysics, and desperate, blind faith.

Louise Hay talked about the need for people to love themselves, and the importance of a positive mental attitude when facing adversity. There was a spiritual core to her presence and to her message that I couldn’t quite put my finger on. She invited anyone who had something to say to please do so, and at one point a man in the front row rose to speak.

“Hello everyone, my name is Steven,” he began. I waited for the standard 12-step response, “Hello Steven!” but the audience only listened respectfully. “I’ve been dealing with this thing for almost a year,” he continued, “and I just wanted to say that I brought someone with me for the first time tonight.” He leaned over and pulled a middle-aged man up to his feet. “This is my dad.”

The words were barely off his lips when the response came: a thunderous, clapping, cheering ovation. The man hugged his son, another wave of applause struck, and eyes welled up across the room. We all wanted the father, still in the front row embracing his son for dear life, to be ours.

Before long, Louise Hay had concluded her talk and was now leading everyone in a closing song.

It was a perfectly simple melody; slow, a little melancholy and not too churchy. The voices of the men in the auditorium, with more than its share of choirboys, surrounded us in glorious harmonies.

And then the communal tears returned, this time in demonstration of fears unspoken and absent friends and a heartsick desire for the world outside the hall to be as beautiful as the simple tune that warmly embraced us and, ever so briefly, lifted us away from our lonely ordeal. And then it all concluded, quietly and without further applause.

“That was great, Mark, wasn’t it?” Richard said, his voice still thick with emotion.

“Yeah, it was,” I replied. There was no doubt that the program had moved the crowd. Everyone seemed as if they’d received some sort of transfusion.

We caught up with Emil at the door on the way out. “Well, Mark,” Emil said to me, patting me on the back and leading me out of the hall, “this is what it’s all about right now. Do you understand? Finding out what’s happening with the research and the drugs and everything.”

We walked toward the parking lot and I looked back at the hall, still teeming with people standing around talking with friends. “This is how we’re going to beat this damn thing, Mark,” Emil went on, “by paying attention and taking care of yourself and staying on it! Keep fighting it, keep informed, and we are going to beat it.”

They invented the word “empowerment” for Emil, I thought to myself, not knowing Emil would die at home, months later, ending his own life with a Seconal-laced glass of scotch when the brutality of AIDS had finally exceeded his will to survive.

He has the situation completely under control, I thought as we walked away from the Louise Hayride. I felt relief in that moment, for him and for me. My own HIV diagnosis was less than two years old.

Emil had such confidence that night, and I believed every word he said.

(For more on the early days of the AIDS crisis in Los Angeles, check out my memoir, A Place Like This.)