Previous Next
Anita came out to play last night…

Sometimes the old girl busts out of her shell (how she breathes stuffed in a gym bag in the back of the closet I’ll never know) and takes the stage. She got her chance last night, when my drag alter ego brought some laughs to a group of friends in recovery with her infamous TV set number. They responded with love and applause, so she happily withdrew to her musty closet until another time. 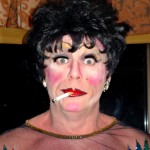 It reminded me of her earlier exploits, when the show “Anita Will Recover!” was produced for a sober event in Atlanta. The first few minutes of the show include a interactive media number and then a sit-down before Dick (my actual gay brother) strolls in to deliver some withering remarks. 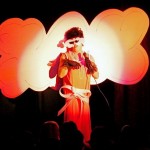 The first time Anita hit a stage to benefit those recovering from drugs and alcohol, she was pursuing the title of Miss Pink Cloud in Atlanta. After having performed with The Armorettes for a couple years back in the 90’s, I was grateful to resurrect Anita for the purpose of helping others who battles the same demons as I have. The oldest video I have of Anita is with the Armorettes, performing an interactive video rendition of Funkytown with a special appearance by the incomparable Mary Edith Pitts.

Sometimes the message is carried without high tech props. As a writer, I think I may be most proud of Anita sitting down and reading “Twas the Night Before Christmas” at a sober fund raising event. Of course, this being Anita, the story wanders off to places your daddy never explored!