Previous Next
HIV and Gay Media: The Vanishing Virus

The turning point could be traced to August of 1998. It was the month that, for the first time in well over a decade, the Bay Area Reporter did not have a single AIDS obituary submitted for publication. The promise of protease inhibitor medications had been realized, and it felt for many that our long community nightmare was coming to a close.

The milestone in the life of San Francisco’s LGBT newspaper was celebrated around the country and became a media story unto itself. “AIDS Deaths Take Holiday,” trumpeted the Pittsburgh Post-Gazette. “For Once, No AIDS,” said the Wilmington Morning Star. The headline in the Spokesman Review assured us that “No News is Good News.” The Bay Area Reporter’s own front page carried two words in enormous type: “No Obits.”

That could be seen as the moment in which coverage of HIV in gay media began to fade.

Today, the LGBT community is celebrating other milestones with joyful regularity. The right to serve openly in the military. Marriage. Growing acceptance and political muscle.

HIV/AIDS has largely moved off the front page and out of public consciousness. Despite newsworthy data such as increased HIV transmission among gay men and the ongoing slaughter of gay black men in particular, those stories feel stale. It has all been said so many times before. Even new storylines, such as Pre- and Post-Exposure Prophylaxis, cure research advocacy, and tools on the horizon such as rectal microbicides, it’s become harder to capture the imagination or interest of the gay community. When new data was reported recently showing that half of the 20-year-old gay men today will have HIV by the time they’re 50 (and if they’re black, that figure rises to a whopping 70 percent), the news barely rated a tweet or newspaper item.

What, then, is the responsibility of LGBT media in this climate of rising infection rates and a bored readership? Are they simply reflecting the community’s waning interest, or do they have a responsibility to keep HIV in the headlines, to serve as advocates for better public awareness?

I was just in the perfect place to ask these questions: The 2013 LGBT Media Journalists Convening, held in Philadelphia and sponsored by the National Lesbian and Gay Journalists Association. About 100 media professionals, including a healthy dose of bloggers like myself, attended the event, which educates LGBT journalists on various issues so they we might report on them with more authority. Those issues this year were transgenders, immigration, aging, labor, and international rights. 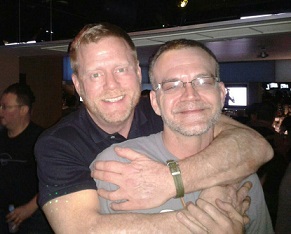 The absence of HIV/AIDS wasn’t lost on me, I assure you (AIDS activists called them out about this in real time in the event’s Twitter feed at #LGBTmedia13) and it became the topic of my interviews with various people in attendance. Their very personal answers – and undeniable passion for the cause of HIV in many cases – sure made it a little easier to understand the tough choices they are making every day. I will be very interested in your reaction.

Aside from my griping over HIV coverage, it really was terrific to be in the company of a lot of dedicated journalists, and I appreciate very much the work done to mount the event, including the contributions of Bil Browning of The Bilerico Project (pictured with me above, at right).

Is sparse HIV coverage just a sign of the times? Is it progress? And what can we do to increase visibility again?

The journalists in my video provide some answers, but I especially liked the observation by gay political activist David Mixner, who reminded me that coming out, whether as gay men or as someone living with HIV, is the greatest tool in fighting stigma and helping people see the importance of the issue. I’m glad I have some company in the poz blogosphere, but we can always use more voices. Anyone who has the ability to share their story, online or across the dinner table, can make an awesome contribution.

Meanwhile, I’m going to keep nudging my LGBT media colleagues, and I encourage you to do the same.