Review: ‘The Death and Life of Marsha P. Johnson’ is Trans Film Noir

Previous Next
Review: ‘The Death and Life of Marsha P. Johnson’ is Trans Film Noir

Marsha P. Johnson, in a photo from the new documentary.

Victoria Cruz, a dogged crime-victim advocate in New York City, has taken on one last case before retirement. She wants to solve the mysterious 1992 death of Marsha P. Johnson — a trans woman like Cruz herself — who’s body was pulled from the Hudson river after disappearing the evening before.

The cause of death had been ruled a suicide, but that doesn’t wash with Marsha’s friends or with much of the LGBT population of New York City, for whom Marsha served as a sort of street ambassador and a cheerful mascot who wasn’t afraid to bare her teeth in the face of injustice. (“Darling, I want my gay rights now,” Marsha sunnily demands in old news footage shot in the days following the Stonewall riots.)

In the new documentary debuting on Netflix today, The Death and Life of Marsha P. Johnson, Oscar-nominated filmmaker David France (How to Survive a Plague) keeps his focus on Cruz, the lone crusader who serves as our guide to the characters who populated the Stonewall era and beyond. Will our tenacious gumshoe find justice for Marsha? Was she murdered?

If all of this sounds like the narrative of classic film noir, it isn’t far off. Cruz, heavy with layers of clothing and walking with the assistance of a cane, is often framed by director France against long vistas of cityscape that mark her deliberate journey toward justice. She is our Sam Spade, with a little Gandalf thrown in, and she is relentless.

Cruz tears open boxes of forgotten, dusty files about the case. She argues for more resources from her strapped social service agency. She is even forewarned by a cop she gets on the phone. “Don’t play detective yourself, alright?” he says ominously, his gruff voice straight out of central casting for a Scorsese film. “Leave this to the people who should handle it.”

Nevertheless, she persists. Cruz scrutinizes every potential witness and source, peering over her glasses with eyes grayed with age and hardship. It’s easy to forget the titular character for spans of time, so fascinating is our main detective. 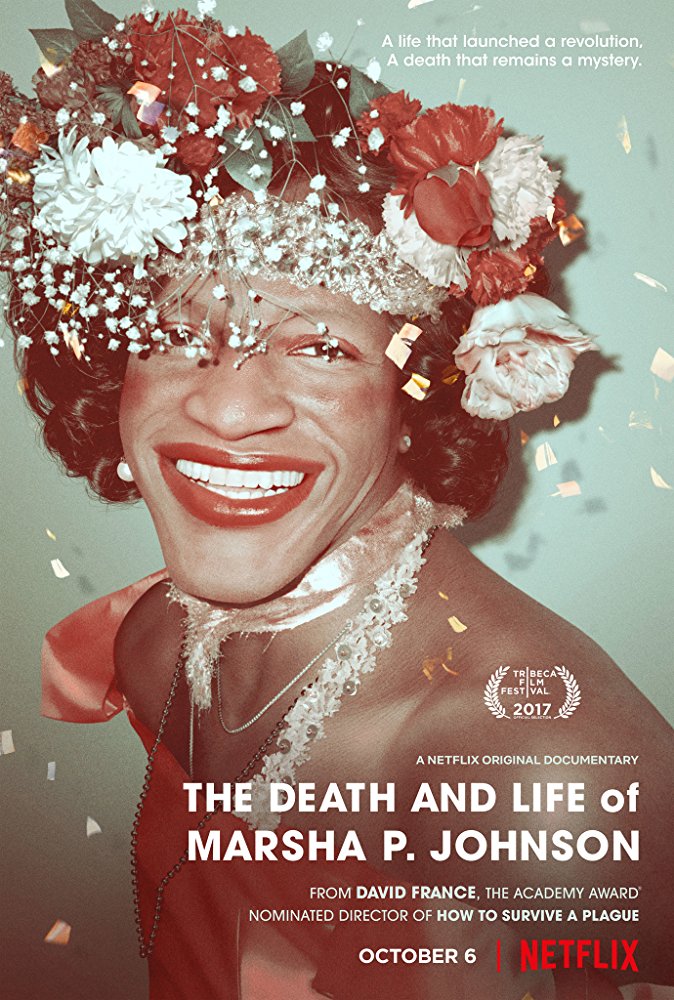 Along the way, Cruz interviews and scours footage of the surviving friends of Marsha, chief among them Sylvia Rivera, a fellow trans activist with whom Marsha founded a makeshift shelter for trans women. Sylvia was the more confrontational of the two, railing against white middle-class gays who would ignore the plight of their trans sisters.

In riveting footage from a 1973 gay pride event, Sylvia storms the main stage and fights the loud booing  of revelers.  She has been beaten, she screams at the crowd, she has been arrested and lost her job and apartment, all for the cause of gay liberation. “And you all treat me this way? What the fuck’s wrong with y’all? Think about that!” It is a desperate, psychic breakdown for Sylvia, who would attempt suicide only hours later. Her life takes a downward spiral in the years that followed, at one point becoming homeless and living under tarps on the street. Sylvia died in 2002, ending a life trajectory that suggests what might have lied in store for Marsha as well.

Ultimately, the fate of Marsha P. Johnson and the documentary bearing her name exist in the harsh realities of the real world, where police apathy and the budgetary constraints of advocacy agencies dash our hopes for a single, revealing answer or a completely satisfying denouement. Such is life — and the largely ignored murders, mounting weekly – for transgender women in this world.

France’s How to Survive a Plague, his documentary of AIDS activism that is equal parts unbearable tragedy and grassroots inspiration, isn’t strictly history, because the plague of HIV, however changed, is still with us. The same can be said of The Death and Life of Marsha P. Johnson. The death of this remarkable person is in the past, where the secrets of her fate remain buried. The same cannot be said for the epidemic Marsha represents.

For transgender women in this country, the murders just go on and on.