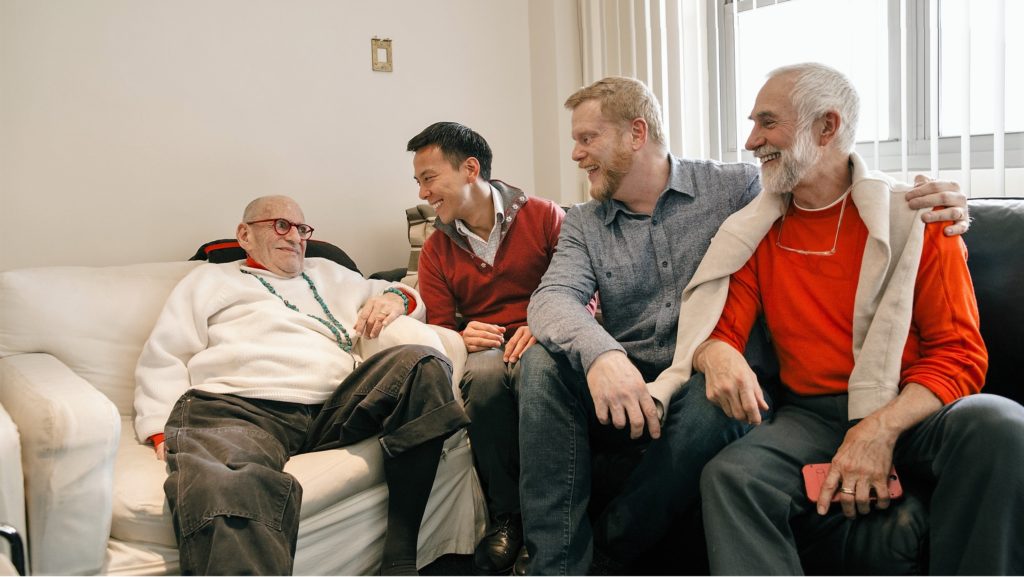 The new POZ Magazine feature article, “Finding Larry Kramer,” tells the behind-the-scenes story of how the iconic activist found his way back to GMHC nearly thirty years after the organization kicked him out for being such a pain in the ass. It is an intimate look at an American hero and lion in winter.

I had the pleasure of writing the story, which meant meeting both Larry and Kelsey Louie, the GMHC head who orchestrated the reunion, but space did not permit me to share what might be the most surprising thing of all about the activism icon: his love affair with a man he pursued for decades.

In the article, I have this to say about the softer side of Larry:

All his writing, including his screenplays, his controversial novel, Faggots, and even The Normal Heart, is at its core about the pursuit and potency of love. The poignant secret hiding in plain sight is that Larry Kramer is a romantic.

But there’s so much more to the story.

In the 1970’s, Larry wrote his outrageous novel, Faggots, a searing indictment of the relentless sexual pursuits of gay men, as a way of coming to terms with losing the man of his dreams in real life. That man, named Dinky in the book, is portrayed as a hot number with an overbooked dance card, hardly able to step away from the sling long enough to pay much attention to the main character, Fred — based on Larry, of course. The book does not end with the two of them walking into the sunset together.  There are far too many sweets in the gay candy store for Dinky to focus on only one.

At any rate, Dinky is a real person and his name is David Webster. And two decades after their star-crossed (St Andrews crossed?) initial affair, Larry and David circled back to one another, fell in love, and were married in 2013. Talk about a long tease.

David was nearby during my interview with Larry in their New York City apartment, finally settling in with us on the sofa as the afternoon progressed. He is a strikingly handsome man, witty and charming and flirtatious, if my radar for such things is still functional. He also dotes on Larry – a completely mutual trait – and offered occasional context or even defense of Larry’s views.

The topic of Faggots eventually came up, of course (I had my first edition copy in my knapsack, waiting for the right moment for an autograph), and I couldn’t help but ask David how it felt to have the kinkiest details of his sex life in the center of the heralded, vilified novel. I had heard that David once considered the book a total invasion of his life.

“So, David,” I asked, a bit sheepishly, “is it true what Larry says in Faggots? Did he actually—“

“Ransack my leather gear collection while I was out of my apartment?” he interrupted. “Go through my file cabinets? Punch me in the face?” David blurted this all out incredulously, but his grin was mischievous. “The man is crazy!”

Larry smiled broadly at David’s feigned injury, as if hearing a favorite family story for the umpteenth time.  “Faggots was my love letter to David,” Larry tells me, still beaming toward his husband.

I knew the scene was being played for my benefit but it was adorable nevertheless. Their affection for one another was palpable, whether in spite of, or because of, their complicated romantic history. 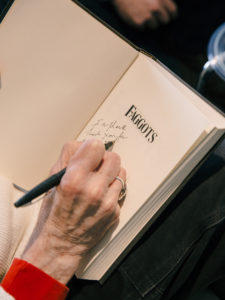 The time felt right for me to produce my copy of the novel and ask for a signature. Larry took the book graciously and then asked, “What did you think of it?”

“I read it when it came out in 1978, when I was 17 years old,” I told him. “I was horrified.” I was a baby gay who was shocked by the phantasmagoric sex and the seeming impossibility of committed love.  “I remember wondering, Is this me, is this what I am going to be? And then,” I admitted to Larry, “within a few years, that book was me…”

Larry nodded knowingly. “But I read it again before meeting you today,” I added, “and the writing is hilarious. I couldn’t see that the first time.” I also could never have known I would be standing in the living room of the two main characters, together at last.

Larry dutifully inscribed my copy and considered the gauntlet his character walked through in order to capture the man he loved.

“This whole book,” Larry said, “was my way of saying to David, ‘This is how much I love you.’”

And this time, David smiled back.

(If you haven’t already, check out the full story, “Finding Larry Kramer,” at POZ.com or where ever fine HIV periodicals are on display.)