Pregnant Guest Kicked Out of ‘Charm Ball’ Over Protest Fears 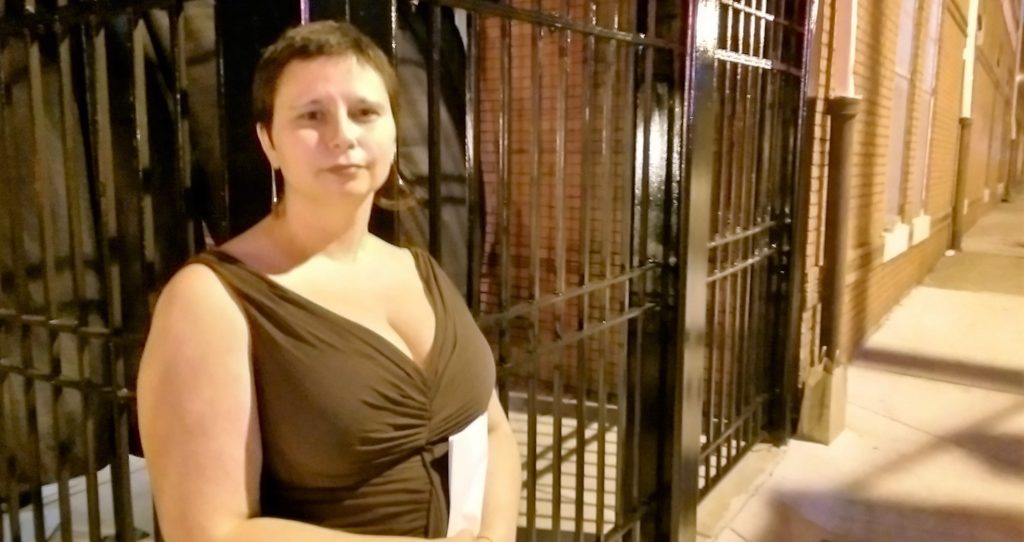 Itta Englander, seen here stranded outside Chase Brexton’s “Charm Ball.” She was denied re-entry to the gala after spending a few minutes talking to protesters upset with the agency’s leadership.

When this blogger chose to join protesters at Chase Brexton’s annual “Charm Ball” to voice concern over the direction of Baltimore’s largest healthcare provider to the LGBT community, there was little doubt there would be some tension at the elegant affair.

Sure enough, urgent concerns were ignored and belongings were policed. There were stern warnings from security and more than one intimidating confrontation.

And that’s only what happened between Chase Brexton and their own guests. Really. The organization can’t seem to make a gracious move these days, even on their most elegant night of the year.

About thirty protesters, most of them patients of Chase Brexton, gathered outside Baltimore’s Railroad Museum on Saturday night, waving signs to cars as they entered a private parking area. As guests made their way toward the entrance, protesters called out “Rehire! Reform! Replace!” in reference to rehiring the five managers who were fired in an effort to intimidate remaining staff out of joining a union, and to replace CEO Richard Larison for creating an atmosphere of embarrassment and distrust at the health center.

Soon, event organizers installed a black paneled curtain to partially block the guests’ view of protesters. It was a terribly ironic sight, watching Chase Brexton’s attempt to literally blot out their own patients from view, but we’re dealing with an agency that has been tone deaf to community concerns for many months now.

“Charm Ball” security erects a curtain to block the protesting Chase Brexton patients from the view of the gala guests.

Itta Englander, a Baltimore City resident who attended the event with her wife, had donned a lovely black gown for the Charm Ball, and even indulged in high heels, despite her pregnancy. She wanted to look great for her wife and for others at their table, all of whom were associated with a company that donates to Chase Brexton.

“I’ve been reading about what has been going on with the firings of managers there,” Englander said in an exclusive interview. “We saw the protesters when we were driving in, and I wanted to talk to them. I know the situation has been really, really tough.”

So, after being seated at her table and enjoying some of the program, Englander strolled out of the venue to have a chat with protesters. She listened to the concerns of several patients and met the wife of fired nurse practitioner Jill Crank, who spoke emotionally about the personal toll of the firings. Englander accepted a few printed flyers about the controversy and took some baked cookies to share with her table.

Those few minutes, and her sympathetic chat, would have harsh consequences.

When she attempted to re-enter the Charm Ball, Englander was stopped by organizers. “They wanted to know my name and my table number and see my ticket, all of which I produced. Then they said I was a ‘disruptive influence’ and they would not let me back in.”

Itta Englander was treated as if her time with protesters had exposed her to something terrible, a fast-spreading stomach virus perhaps, and nothing short of immediate quarantine would protect the other guests from heaving their soup course onto reams of black taffeta.

Without her phone or car keys, Englander asked that word be sent to her wife that she had been barred from coming back inside. That’s when event security decided to intimidate a second Charm Ball guest.

According to Englander’s wife, who asked not to be identified, security came to her table and removed her from her seat for a tense chat. She was told that Englander had attempted to re-enter the Charm Ball “with contraband,” and that she had “gone with the protesters.”

Englander’s wife could not have been more flabbergasted if she had been told that her partner had left the Charm Ball to join the traveling circus. But security wasn’t done with her. “They wanted to know if I was going to cause a scene,” Englander’s wife said, “and they wanted assurance I would not be disruptive before they would allow me to return to my seat. They never told me Itta was waiting for me outside.”

And yet she was. For more than thirty minutes, Englander uncomfortably stood in her heels on the sidewalk outside, waiting anxiously for her wife and finding nowhere to sit in her gown and rest. When she attempted to speak to Charm Ball organizers about her plight, they found her presence so noxious they literally turned their backs and walked away.

She eventually received help from the protesters, one of whom lent Englander a cell phone to contact her wife, who promptly came outside. The two of them left immediately.

The peaceful protesters included several Chase Brexton patients, upset over the loss of their healthcare provider during a failed union-busting attempt by management.

“I know there are always two sides to an issue,” Englander said about her charmless evening, “but when one side is so guarded and paranoid, they just come off as unwilling to listen, and even uncivil — even to their own donors or people who are part of your core group. There were a number of ways the whole situation could have been handled better.”

There are few sights this blogger has witnessed in 30 years of HIV activism as outrageous as an organization literally constructing a curtain to hide their own, already marginalized patients from the view of donors. Or the smug smiles on their faces as they did it. I will not soon forget it, and neither should you.

It brings back memories of a generation ago, when HIV was new and ignorance was king, when fear and self-protection prevented the self-serving from hearing the facts of the matter, when the diseased unfortunates were hidden and ignored, when small-minded people simply turned their backs on needful voices.

But as has been clearly established, that kind of irony is lost on the leadership of Chase Brexton Health Services.