Previous Next
The Entire 2011 ADAP Conference in Nine Minutes!

The 2011 ADAP Advocacy Association (aaa+) conference held July 5-7 in Washington, DC, was bursting with spirit. Dozens of advocates from across the country met for three days of workshops and speakers, and in this video blog, you’ll see the entire conference boiled down to only nine minutes. I’m the cliff notes of HIV/AIDS events!

From people like Robert Breining of POZIAM from Philly to Lepena Powell Reed from Tampa, there was no shortage of passionate voices. But there were more than a few things on the conference agenda that really surprised and educated me — and provided resources I never knew existed.

Take the Patient Advocate Foundation, for instance, my great discovery of the conference. Did you know there is a non-profit foundation that focuses on resolving disputes between you and your insurance company or medical provider? Whether they are refusing to pay for a medication, or questioning a procedure, this Foundation will fight for you. They have garnered such a reputation that many companies just fold when they see the Foundation coming.

There may be politics involved here about which I am unaware, but where were our large national organizations? Frankly, I was disappointed to see a conference devoted to arguably the most pressing HIV issue of the day, held right in the DC home of most national agencies, and yet major organizations like the National Minority AIDS Council (NMAC) were not represented. As one speaker shouted from the podium, “WHERE YOU AT?”

(To NMAC’s credit, they recently launched their own web site devoted to the ADAP crisis, with much of the same information available through aaa+. The more the merrier, of course, but I sure wish large organizations would pool their efforts and support one another.)

As usual at these type events, the real value is in the company of like-minded folks trying to do the right thing, and some of our greatest champions were there, like Butch McKay of the Positive Living Conference (one of the last conferences serving those living with HIV, and the best of them all), Dab Garner of Dab the AIDS Bear Project, and Bill Arnold of the Community Access National Network (CANN).

We shared meals and gossiped about news in the HIV/AIDS arena, and ventured out in DC for a dinner here and there. Some of us ventured even later, and further, but young activists these days, whatcha gonna do? I wish I had the stamina of advocates like blogger Christopher Myron, or World AIDS Institute founder David Purdy!

But back to some great resources for you. Have you heard of the Pre-Existing Insurance Plan (PCIP)? It provides health insurance to those who have been uninsured for six months or have been denied coverage. It’s a governmental program designed to help get people insured while we’re waiting for the new health plan to kick in, which happens in 2014. If it sounds like you qualify, I urge you to contact them at 866-717-5826. The premiums are based on what a healthy person would pay in the same market.

Attending conferences like this one is a privilege and a responsibility. The AIDS Drug Assistance Program waiting list continues to grow on a daily basis, denying patients the very medications that can keep them alive. This national disgrace deserves our attention and our phone calls to our elected officials, urging them not to forget the most vulnerable among us, even in times of fiscal crisis. Today is a great day to pick up the phone and contact your U.S. representatives, and tell them that you want them to support (or keep supporting) funding for ADAP.

In the meantime, my friends, please be well.

It appears that poz queens like me have got nothing on Michelle Anderson. The Texas beauty was recently crowned the 2011 Ms. Plus America (which celebrates “the essence of the full-figured woman”), and Michelle’s platform is the impact of HIV among women, especially women of color. But there’s more. Michelle is also the first openly HIV positive woman to win a national beauty pageant title! She knew all along that entering the pageant could mean becoming a high-profile HIV positive role model. “I entered the pageant to create a voice for women, while raising awareness, educating and empowering women,” Michelle says. “I wanted to show that in spite of my diagnosis, I can still live a happy and prosperous life!” (Photo credit: Brett Vander Photography)

Artist Emilio Aponte is influenced, as he says, “by everything I see, feel and experience…” Considering Emilio is an HIV risk reduction coordinator at the Pride Center in Ft Lauderdale, it’s no wonder that his current exhibit there, “Ribbon HIV,” focuses on HIV prevention and education (at right, a detail shot from his piece, “Mutants”). And what a stunning collection it is — high contrast black and white “manipulated photos” that all have a touch of red somewhere, reminding us the virus is still present in everyone’s lives. Beyond the images themselves, Emilio accompanies them with brief, positive statements about protecting oneself from HIV risk, or taking care of yourself if you are living with HIV. It’s a beautiful collection with a terrific message. The exhibition is open to the public at the Pride Center, Main hall from July 5 to August 7, 2011 from 11:00 am to 9:00 pm. 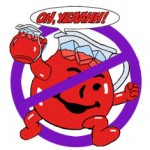 Two exciting new clinical trials have shown the efficacy of “pre-exposure prophylaxis” therapy (taking a drug to reduce your risk of infection before engaging in risky activity). This seemingly bolsters the strategy of using meds for HIV negative people who are at risk of becoming infected, as well as the “treatment as prevention” strategy of having those with HIV on drug treatment. Not so fast, says Poz.com editor Regan Hofmann in her latest blog posting, “Not Drinking the PrEP Kool-AIDS.” Regan isn’t sure the study data is strong enough, and the daunting task of delivering meds to every negative person who might need it is a tall order. She doesn’t mince her words: “PrEP is a profit-driven sex toy for rich Westerners, disguised as a harm-reduction and prevention tool for disenfranchised people at risk for HIV.”