Previous Next
The Hilarious Idiocy of Anonymous Gay Sex

I have had conversations exactly like this one. And I’ll go even further: in my crystal meth days, I had chats like these through glory holes. “If you’re clean, we’ll do it raw,” the gentleman in the adjoining booth would suggest, to which I would reply, “You’re going to take the word of a stranger you’re talking to through a three inch hole in the wall?” 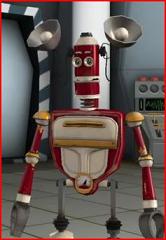 The lesson in all this, of course, is not to put your life into the hands of someone you’ve known for five minutes. Or five months. The responsibility not to get exposed to HIV (and hepatitis and other STD’s) is entirely yours. And another thing: if you’re a sexually active “man about town” and your last HIV test was months ago, the results don’t really matter anymore. Go get a new one.

I exchanged e-mails with the producer of the robot video, who prefers the anonymity of cyberspace but nevertheless has strong feelings about the curious mating habits of the gay male. “If (HIV negative) guys are out there having anonymous sex with strangers, they’re having plenty of contact with HIV+ guys.” he wrote me. “Is there really something that they’d do with a stranger from Manhunt or Grindr that they wouldn’t do with someone who says he’s HIV+? It seems that what bothers them is knowing the truth.”

“I’d like to think that gay men could educate themselves enough to apply a safety standard to their conduct that doesn’t stigmatize anybody,” he goes on, perhaps a bit optimistically, “rather than hide behind a curtain of fear and blame. 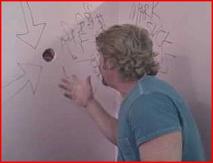 I explored a lot of this territory is one of my older videos, “Mark’s R-Rated Sex Pig Blog.” In the video I discuss risks like barebacking and reenact my glory hole conversations (left), complete with a wall, a hole, and my friend Brian playing “the mouth.” And since the video was done before I got a handle on my meth addiction, you can see the ravages of addiction on my face, which is a lesson all its own.

This funny, bawdy robot video says more about the state of gay male sexual risk than any of the horrid public health campaigns out there today. It is exactly the kind of message I would have praised in my recent video conversation with HIV activist Sean Strub about HIV prevention campaigns.

If you want to do something about new HIV infections among our gay brothers, here’s an easy task: send this video to every sexually active guy you know.

Sometimes the truth hurts. In this case, it’s also hilarious.

————————————————————–
Kudos to Maureen McCarty of The New Gay for flagging this video for me. Finding potty-mouthed robots chatting about risky sex is exactly what makes a good editor, I always say. — Mark