When Chanse, a 19-year-old gay man living in Shreveport, Louisiana, tested HIV positive a few months ago, his mother reacted with understandable emotion and concern. And then she did something both odd and beautiful: she threw Chanse a coming out party.

“We had a couple of dozen family members and friends there,” Chanse told me during my recent visit to my hometown. “And halfway through the party we started pinning red ribbons on everyone. They didn’t know what to make of it.” 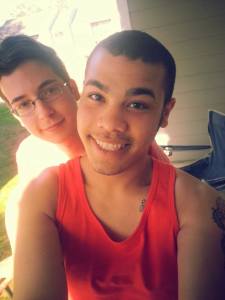 His mother then called the group to attention and said she had an important announcement to make. “She wanted everyone to know that something had happened and I would need their support,” he said. “And then she told them that I had tested positive and that she loves me.”

The response from the party attendees was immediate and moving. There were tears, yes, but they also congratulated Chanse for taking charge of his health and starting treatment. Since then, several family members have begun to volunteer for The Philadelphia Center, the local HIV services agency where Chanse was tested and participates in ongoing wellness programs.

HIV continues to devastate the South with alarming infection rates. One might assume that in the most stubborn of Red States, gay men have lives of rejection and misery, that they are apathetic about HIV, that they are ignorant about seeking treatment or accessing prevention strategies such as pre-exposure prophylaxis (PrEP), or that living as a gay teenager brings so many challenges that HIV falls far down the ladder of priorities.

That is clearly not the case for Chanse or for his boyfriend Josh, also 19 years old, who both swept into action when Chanse tested positive and, in another room of the agency, Josh learned he was HIV negative.

“I told him right away that I wouldn’t leave him,” said Josh. “We cried in the hallways for a few minutes, and then we both wanted to know right away what to do about it. One of the men at the agency, Eric Evans, told me about PrEP. I did some research and knew I wanted to start taking it.”

(I wish to thank the very good people of Allied Media Productions in Shreveport, Louisiana, for sharing this interview clip with me. They are real public servants, producing video content for agencies like The Philadelphia Center and The Deaf Action Center.)