Previous Next
The Disguised Blessings of HIV+ Poet Mary Bowman

When Mary E. Bowman stepped to the stage five years ago at SpitDat, an open mic night in Washington, DC, she was 20 years old and terrified. She was about to perform “Dandelions,” her first poem to reveal a secret that her own family had long kept quiet: that Mary had lived with HIV since birth, the result of a mother addicted to drugs who died when Mary was only three. 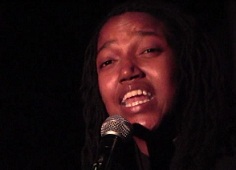 “I had not memorized the poem yet,” Mary told me, “and the paper I held was shaking. It is usually kind of a loud environment, but when I started to read, the room went silent. That made it even more nerve-wracking.”

Mary was nervous about the audience response, about what they would say, and if any of them would even be her friend once her poem was done. She needn’t have worried.

“It was such a loving environment,” she said. “It was so accepting, like a family. When I was done, everyone applauded. I walked to my seat and a young lady was crying, and all she said to me was ‘thank you.’ I realized the poem wasn’t just about me. It was about other people, too.”

“Dandelions” explored her feelings about the mother Mary hardly knew, a loss that Mary has felt deeply her entire life. “I was eventually raised by my biological father,” Mary explained. “He wasn’t married to my mother. He would come to see me when I was a baby and find me on the sofa alone… and my mother out of the house.”

Mary’s father witnessed the scene “far too many times” and took the child home to his wife, who fell in love immediately and raised Mary as her own.

Mary’s talent lies not only in her poetic words, but the sheer passionate force of the emotions behind them. It’s impossible to watch her and not to be moved. She grabs you by the heart and doesn’t let go.

Today, Mary works in policy and advocacy at The Women’s Collective in Washington, DC, but only after spending her younger years without very much social support for her status. “My family was very quiet about HIV,” she said. “Even when I was at the hospital growing up, I didn’t have an outlet to talk about it.”

Things have changed. In addition to her advocacy work, Mary has performed at HIV conferences and for events such as AIDSWatch in Washington. Her work as a performance artist and poet is a unique niche among young advocates, but it is when working with other women that the loss of her own mother sweeps over her.

A lot of the women have drug addiction histories. They have had their children taken away. “They are my support system,” Mary says, “and it reminds me that my mother isn’t here. They tell me stories. I just wish someone had saved my Mom as well. She didn’t have the services available to her that they do now.”

Working with these women has been a melancholy gift to the young artist.

“I’ve been caught up in emotion several times, when performing for women,” she says, and their bond has become her only connection to a woman lost to time and sad circumstance. She pauses to consider the many faces of the women for whom she has recited “Dandelions.”

“They are my mother,” she adds.

A dandelion in the midst of rose bushes would stick out like a sore thumb to ignorant souls
But I know the road this dandelion endured
This weed that all gardeners want to destroy is more appreciated by God than any seemingly beautiful bush of roses
Though that misunderstood dandelion wont for long last
Let it be known that God gave it the role of the outcast for divine importance
My mother was a dandelion in the midst of roses
Ignorant of her purpose she uprooted her soul and unknowingly left herself for dead
It has been said that my mother when above the influence transmuted broken hearts into smiles
All the while dying on the inside
AIDS didn’t kill my mother
It put her at rest
Now this song bird whistles in the key of silence
And I the latter of five write poems documenting the struggle unknown to my family
The sickness she denied lies in my blood with a lesser value
People speak I don’t know how you can live with knowing nothing but owning the growing disease that your mother for so long fought
But see that’s the difference between a rose and a dandelion
Roses were created with thorns to warn hand approaching without caution
Dandelions were not given that option
But they were created by an all knowing God
And that all knowing God created dandelions with the strength to withstand ignorance and hatred
Dandelions live in this matrix of life understanding the price
Roses live like the world was handed
Dandelions take the world and won’t leave a rose stranded
But my mother died before she got the chance to realize that dandelions are blessings in disguise
She I dare say died before her time
That thought lingers in my mind conflicting my belief in the divine
My mama raised me in the faith that the day God sweeps you away is a day proclaimed way before the manifestation
But I can’t help but experience devastation knowing nothing about the woman who carried me toting guns in the defense of my father
It is even harder knowing nothing about her but knowing the reason the hospital has become my second home is because this dandelion
chose to roam with the buffalo
But I seek serenity in the fact that she just didn’t know
That she a dandelion was just as beautiful as a rose
And I will go forth knowing my purpose as a dandelion
This life is worth all the crying and all the dying I have to do just so someone in my shoes can live
I will gladly give myself as the sacrifice if it means that all the dandelions in the world become viewed as more than the consequence of sins behind closed doors
You can lay me on my back and present me life less to God if it means that dandelions with unseen scares will not be viewed as odd
But as gifts from God to show the world that beauty lies not in the pedals of flowers but in the power of unconditional love
And in the strength of the untouched, un-hugged, sometimes unloved but most important of all un-budged dandelions