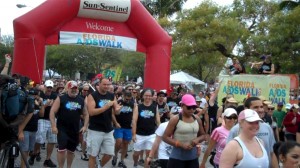 While attending the South Florida AIDS Walk yesterday I was struck with the obvious. These walks just aren’t what they used to be, and neither is the HIV/AIDS crisis. In fact, “crisis” is hardly a word to describe it anymore.

This isn’t simply about the fact that, for white gay men like myself, the horror of AIDS has abated and treatment successes have prolonged life. It’s about the world we live in (culture, politics, money) having moved on. The media is so bored with the topic that they responded with a big yawn to two groundbreaking stories this year: a man in Berlin had HIV eradicated from his body (yes, he was “cured”), and for the first time a new vaccine showed promise in clinical trials.

When a gay man has a little extra money in his pocket, he’s more likely to give it to a political candidate than an AIDS agency. He’s more passionate about ending DOMA or Don’t Ask, Don’t Tell than making free HIV testing available. And when he sleeps with someone, he’ll make his decisions about protected sex based more on who’s positive and who’s not, rather than a mortal fear for his life. Funding used to be plentiful, if not always truly enough. But today AIDS service organizations are in real danger of cutting services as fundamental as HIV testing. 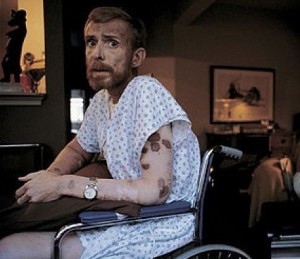 Take a good look at this picture to the left, if you can. When was the last time you saw a friend in this condition? For me, quite some time. That’s progress.

If we accept the fact that science has improved things for those of us with HIV, we must accept the residuals as well. As an aging AIDS activist I must accept not only my good fortune for having survived HIV infection for 30 years, but that younger gay men aren’t that interested in what happened to me a generation ago. Neither are they particularly interested in absolute safer sex messages like “Use a condom every time,” which hasn’t been followed since we were attending funerals for dead friends every weekend. (To watch my point made through pitch-black comedy, check out “AIDS: We did it!” on YouTube.)

If messages about HIV are to remain relevant (and hell, I suppose that includes me as well), then our credibility hinges on reflecting the truth as our community knows it to be: unprotected sex is common, STD rates are up, gay marriage is sexier than condom use, and anyone who is pushing outdated safe sex models looks like an old man with a rake yelling from his front lawn.