I am the man my father built.

Previous Next
I am the man my father built. 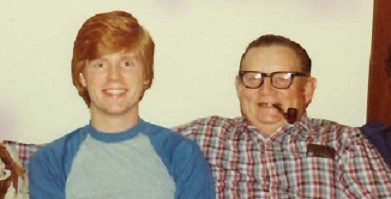 “Now, people have their bat kites and their regular shaped kites,” Dad said to me when I was ten years old, “but the box kite, Mark, now there is the most aerodynamically sound of them all.”

He demonstrated by making a box kite out of balsa wood and brown paper. We took it to the park on the Air Force base where Dad was stationed, just behind the theater where I saw horror movies whenever I could get Mom to provide the parental guidance suggested.

“That’s the beauty of it!” he exclaimed, and he let out one of his big laughs, a roaring Santa Clause laugh that shook his whole body. He held the box high above his head, I at the other end of the string, and I ran across the grass, looking behind to see it climb high above the movie theater. The box soared for an hour as Dad stood behind me, explaining the principles of flight through the eyes of a B-52 bomber pilot.

Box kites became his obsession, and he engaged Mom and the family in his quest to build bigger kites capable of higher altitudes. Our next one stood six feet tall, made with wooden dowels and light fabric. Mom and my sister Nancy sewed to Dad’s specifications while the boys stayed in the garage, piecing together the frame with hot glue. The glue gun seemed invented especially for Dad, who used it liberally for every project. “Lots glue!” he commanded to me and my brother David, hard at work to bring the box kite to life. “You can never have enough glue, boys. Lotsa glue!”

We took the kite – placed atop a Volkswagon convertible – to the spring kite flying contest held in the fields behind Louisiana State University in Shreveport. They had a category for largest kite, and Dad intended for us to win it. One of the entries was an enormous bat shaped contraption made with layers of newspaper and a wing span of at least twenty feet. “Not aerodynamically sound,” Dad said, eyeing the competition. “Won’t fly. Can’t fly. Shoulda tried a box kite.”

Sure enough, the massive bat kite took one fast swoop upwards and then veered down again, demolishing itself. The contest rules stated that kites had to stay aloft for a full three minutes, and our box kite soared perfectly, winning the King family a sparkling trophy presented on the windy lawn of the college.

It made Dad hungry for more.

“Never worry about making a fool of yourself,” he would say, “if it means taking a risk, Mark.” He would recognize my adolescent need to simply fit in with everyone else and he would deny me of it, locking his eyes onto mine. “You gotta take the risk.” 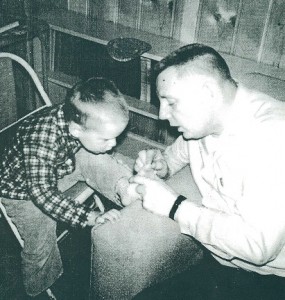 Over the summer the six foot kite became ten feet, built with heavier fabric and stronger wood. We tried it out on a field on the edge of the Air Force base, and I remember Dad forgetting the gloves that protected him from the slick nylon string, and the kite fighting for higher altitude and the nylon going whizzzzz! across his hands, cutting deep into his palm. He looked at his hands with a shrug and then, predictably, laughed. He had lost his grip in the process, though, and the kite escaped to sights unseen.

We jumped in the car and chased it across the base, both of us with our heads craning out of the car and shouting visual sightings to one another, only to find its taught nylon cord snagged on a nursery school swing set. The box kite had dragged the set twenty feet from where, until recently, it had been embedded into the ground.

The air force police would soon arrive to inform us that our “craft” had been picked up on base radar and was a “menace to aviation.” Dad (or “Colonel King” as the uniformed men called him) sheepishly explained and then laughed with the cops as we carefully pulled our menacing craft, foot by foot, back down to earth.

The following year the Kings would risk it all, creating what would become the mother of all box kites. We built it in the driveway for a couple of weeks, using yards of nylon material and cord strong enough for a box kite approximately the size of a Winnebago. We transported it to the annual contest by securing it to a chartered flat bed truck, and the driver – after taking the monstrosity across the Jimmy Davis Bridge to the university – swore he could actually feel the truck lift a little as the kite fought to respond to invitations from mighty spring breezes.

The fabled hush fell over the crowd as the kite was driven onto the contest grounds. Three eight foot box kites – all larger than our original entry – were brought along, and the crowd stood incredulously as each of the three were launched into the air. Then we secured the cords of the three airborne kites to the top of the Mother Kite, and the crowd watched aghast as the King family coordinated their efforts, releasing thick rolls of nylon cord, until the massive kite lurched off the ground and up to stronger winds that would carry it back and forth above the riveted, gasping spectators.

For two minutes and twenty seconds.

Later, on the evening news, Dad would stand amid the wreckage of a violent descent, knee deep in plastic, wood, nylon cord and innumerable remnants of hot glue. It looked like the aftermath of a commuter plane tragedy.

“And how do you feel, Mr. King,” the reporter would ask my Dad, “about your creation not flying for very long. Are you disappointed?”

“Of course not!” Dad replied in the midst of a belly laugh already begun. “Didn’t you see it? It was a spectacular crash!”

Those days, and that glorious moment, are lost to time now, and so is my father. Not long after our kite flying adventures, our personas traded places. I embraced my sexuality and my misfit charms, while Dad struggled to understand a son who was turning out to be more different than he could have imagined. Worst of all, he was made to contend with a teenager who saw him as something abhorrent: typical.

We had many years, later, when our outlooks merged again and we reveled in his various projects and my work as an outspoken gay man. Ultimately, Dad raised exactly what he valued, a man who steps up and asks stupid questions and knows that to soar you must risk the occasional, spectacular crash.

On my best days I live happily as the man my father built, writing and living as an HIV positive queer for all to see and never afraid to take a risk. And on the worst of days, my mind’s eye conjures up a hearty laugh coming from nearby, maybe the garage, where something is being cobbled together that will solve absolutely everything.

Usually it’s a box kite, crafted from unlikely supplies and fatherly magic, that carries me far, far away.

(This story has been adapted from my book A Place Like This, which chronicles my life in Los Angeles during the dawn of the AIDS epidemic and which includes childhood flashbacks like this one. My late father is very much on my mind during Father’s Day weekend. I love you, Dad, and I miss you so much.)