Behind-the-Scenes Photos from the House Hearing on PrEP 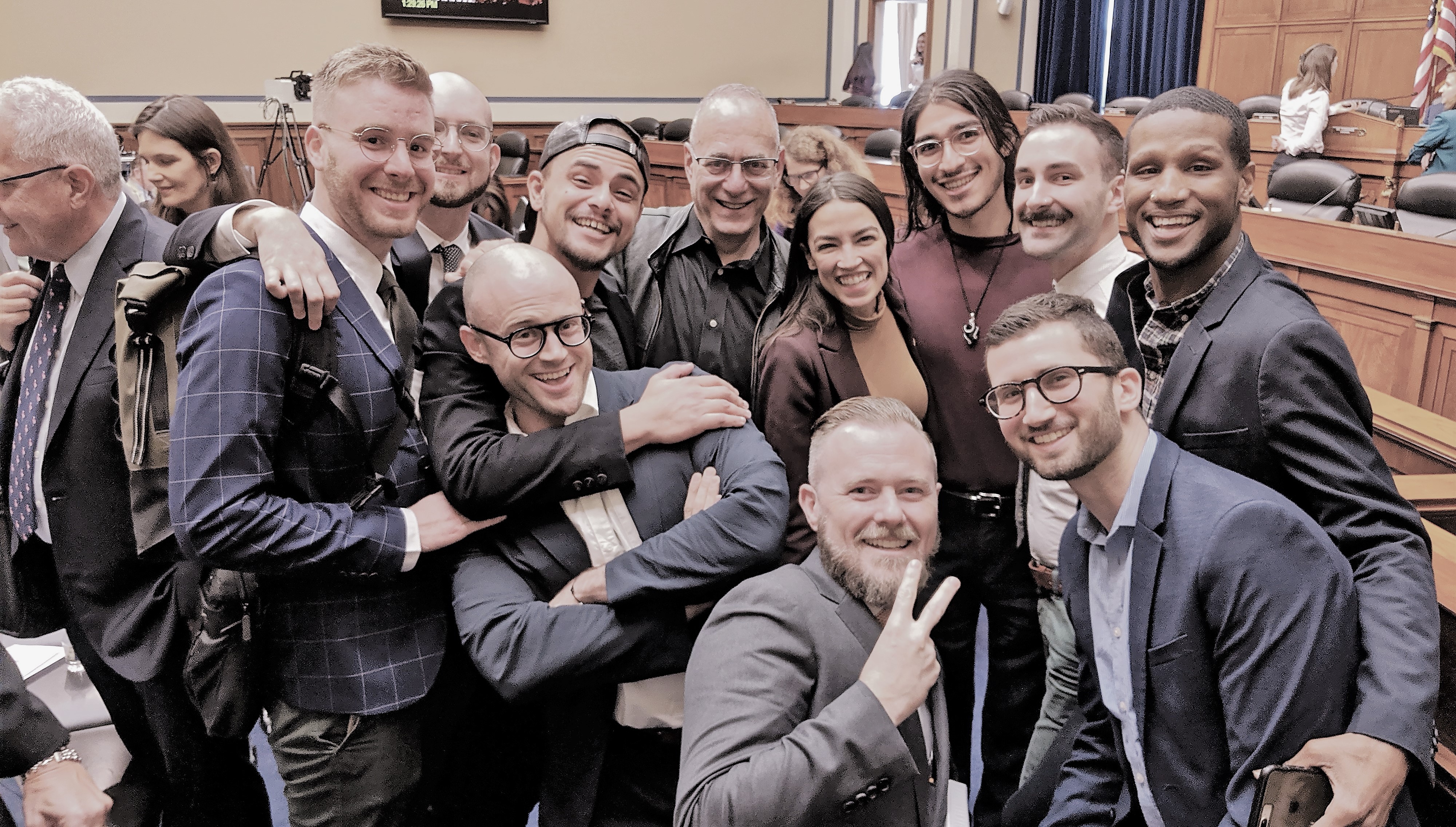 On Thursday, May 16, 2019, the House Oversight Committee conducted a hearing to try and get to the bottom of the Truvada pricing and patent scandal. They were not messing around. The title of the hearing was, “HIV Prevention Drug: Billions in Corporate Profits after Millions in Taxpayer Investments.”

The hearing was the culmination of many months of careful work by the PrEP4All Collaboration, which has managed to grab headlines and the attention of congress with their advocacy over why the CDC has not collected the profits owed them by Gilead for Truvada as PrEP – and why the drug is so damn expensive in the first place.

There is more coming from me on the issues raised (and evaded) during the hearing. For now, I want to give you a sense of what it was like to actually be there and watch the human drama and joy behind the scenes. Let’s get started! 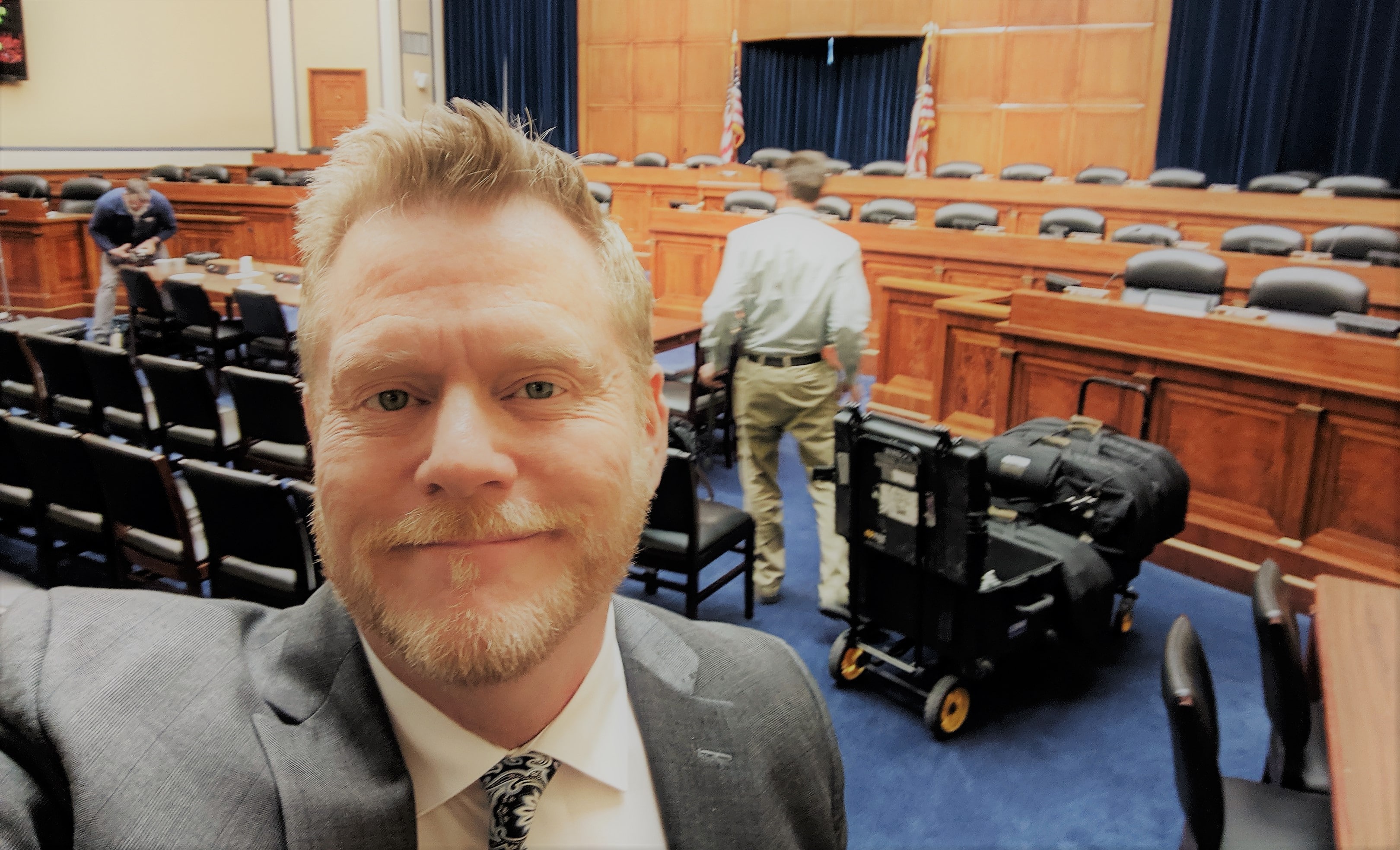 You have to get up pretty early to beat this old AIDS activist to a House hearing that starts at 10:00 AM.  In fact, the only people there when I arrived were setting up the cameras and mics. So, I grabbed a chair and took a seat in the hallway outside, right by the door.

Another gentleman showed up after a few minutes and put a chair next to mine. I tried introducing myself but he wasn’t chatty. Then he pulled out GOLF Magazine and started flipping through it. A dead giveaway. He was pharma. 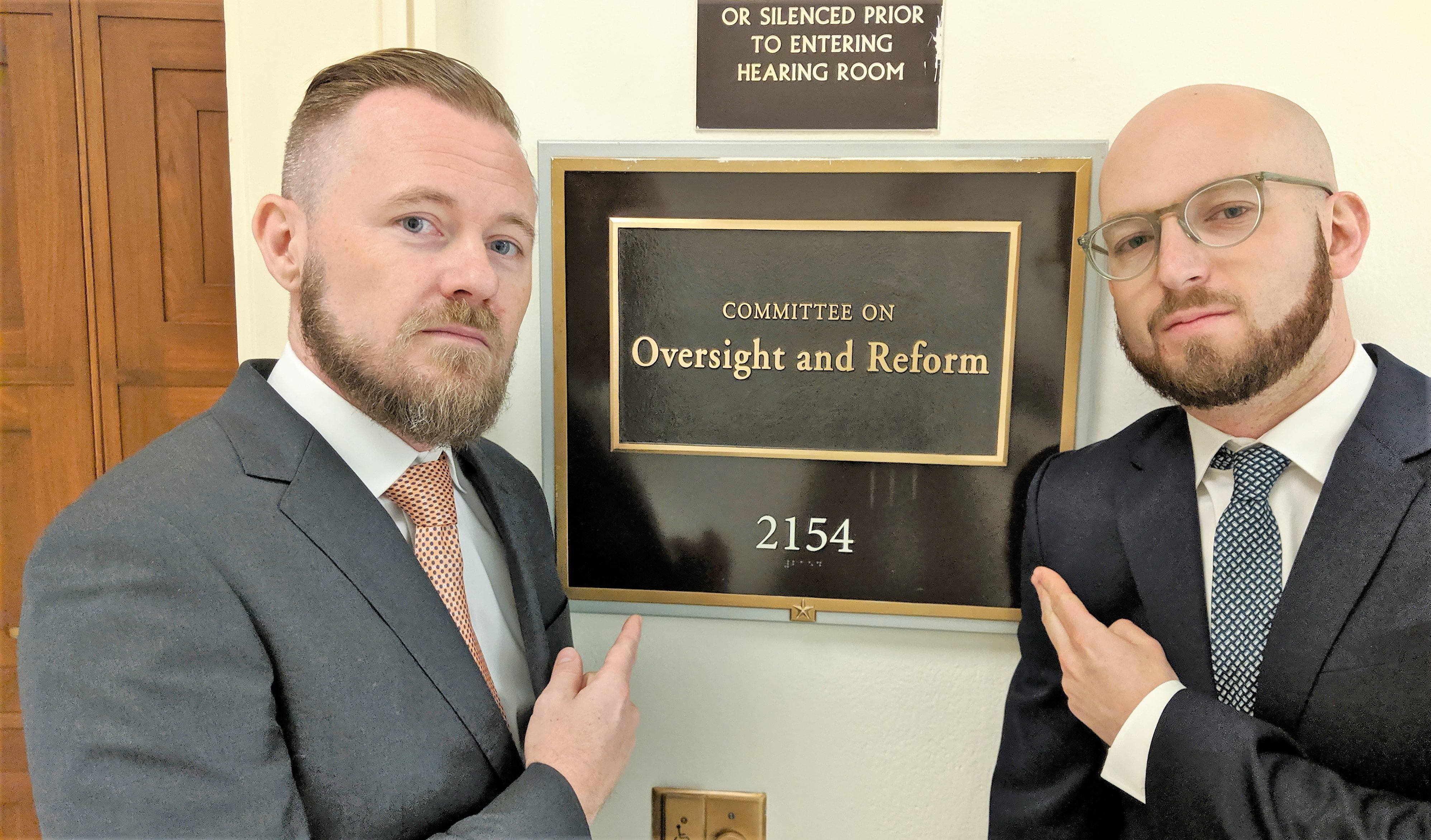 The next to show up were Dr. Aaron Lord, co-founder of PrEP4All and one of those who would be testifying, and the “millennial mastermind of PrEP4All” James Krellenstein. They look comically serious. But whatever works for them is working for us. 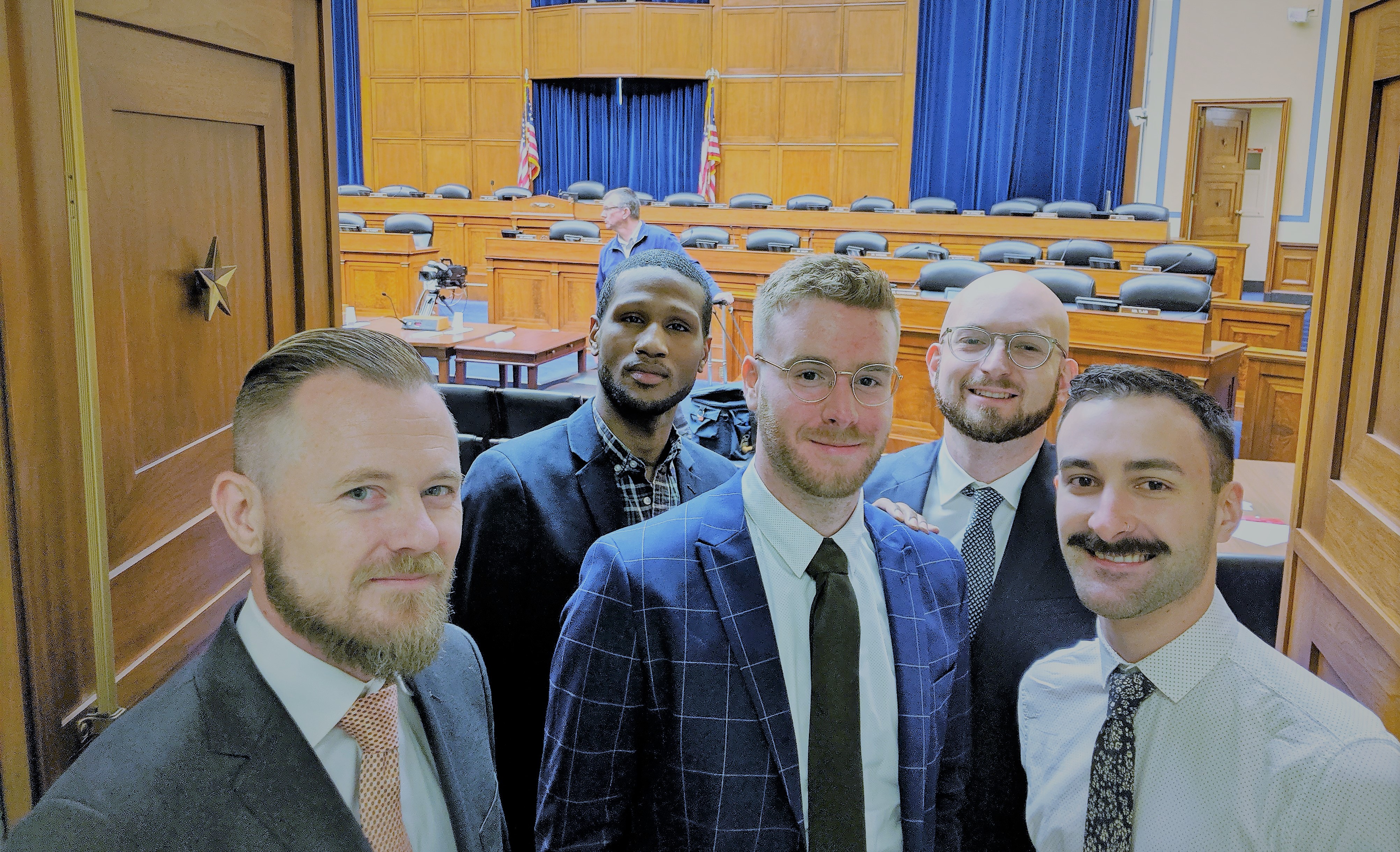 Other advocates began arriving, and we grabbed a shot in the doorway before they closed it.  Congressional staff would be gathering inside and they would not open the doors to the public for nearly an hour longer. 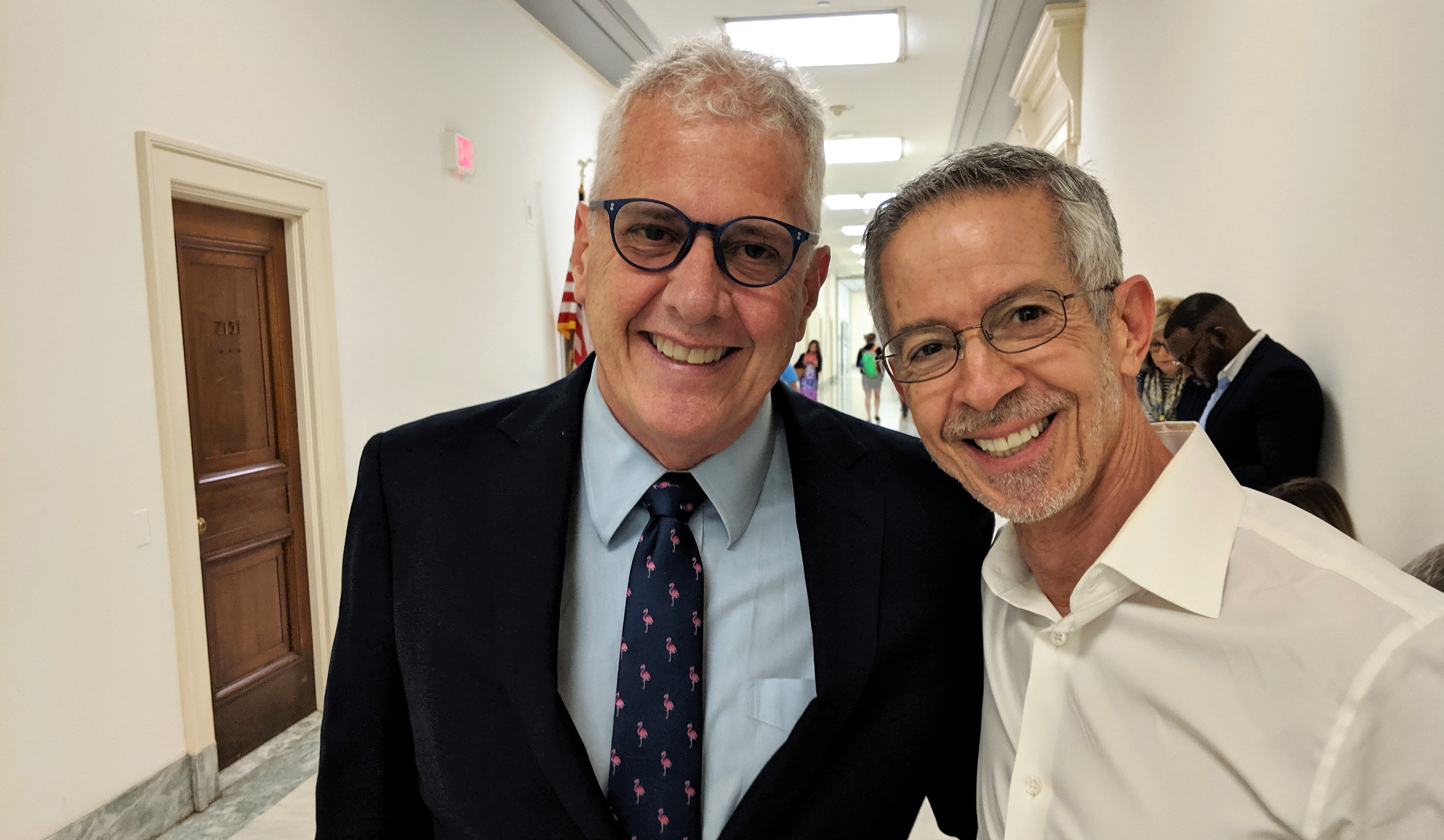 My activist geek head was exploding with joy, watching ACT UP veteran Peter Staley greet one of the witnesses to testify, Dr. Robert M. Grant. Grant conducted the bulk of the “Truvada as PrEP” research and is affectionately known as “the father of PrEP.”  He was also very kind and willing to answer a lot of my questions. 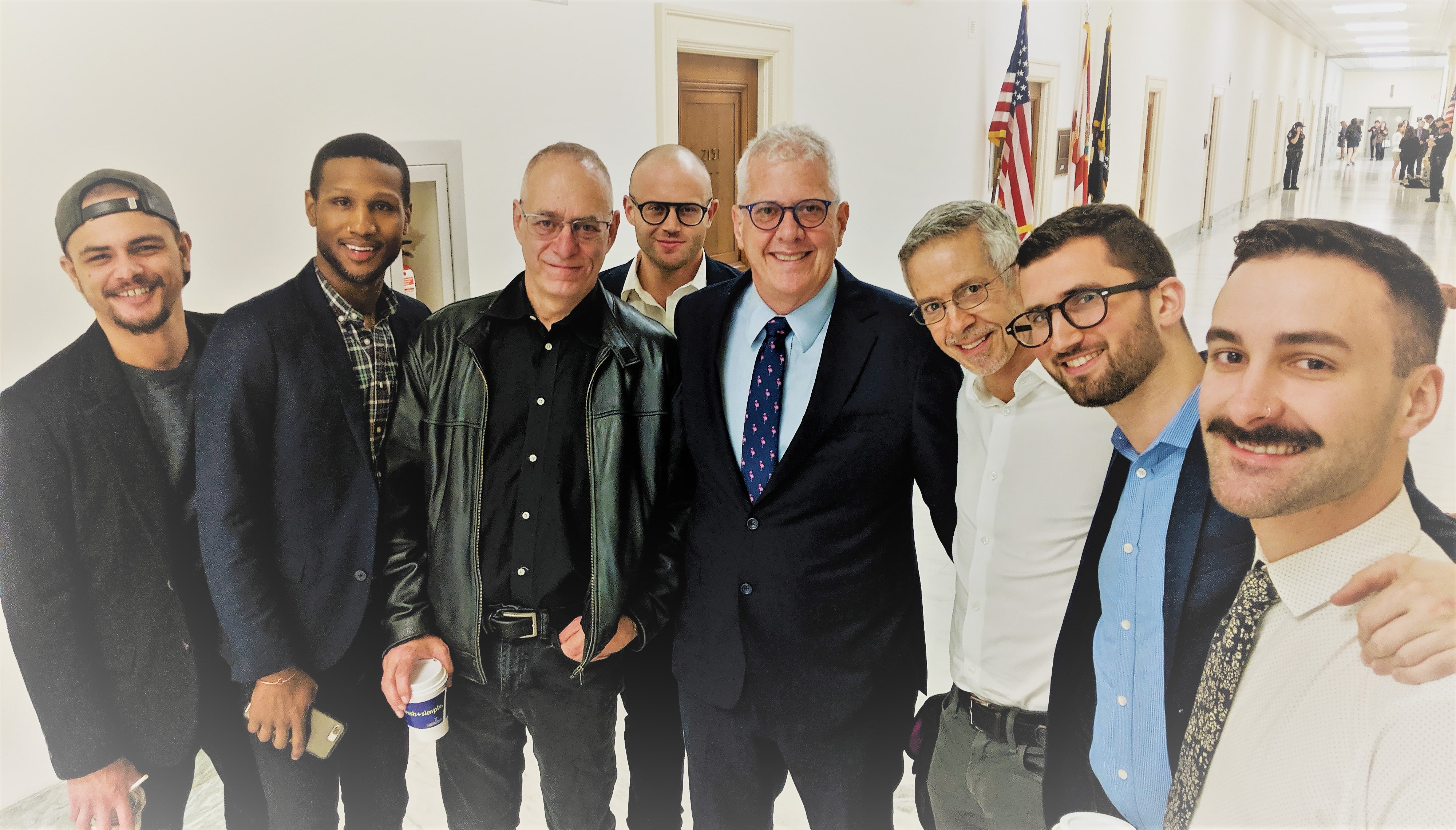 Among the PrEP4All activists and other allies gathering, Dr. Grant was a HIV prevention celebrity and beloved figure. When they posed with Dr. Grant for me, I shouted out, “Thanks, Dad!” 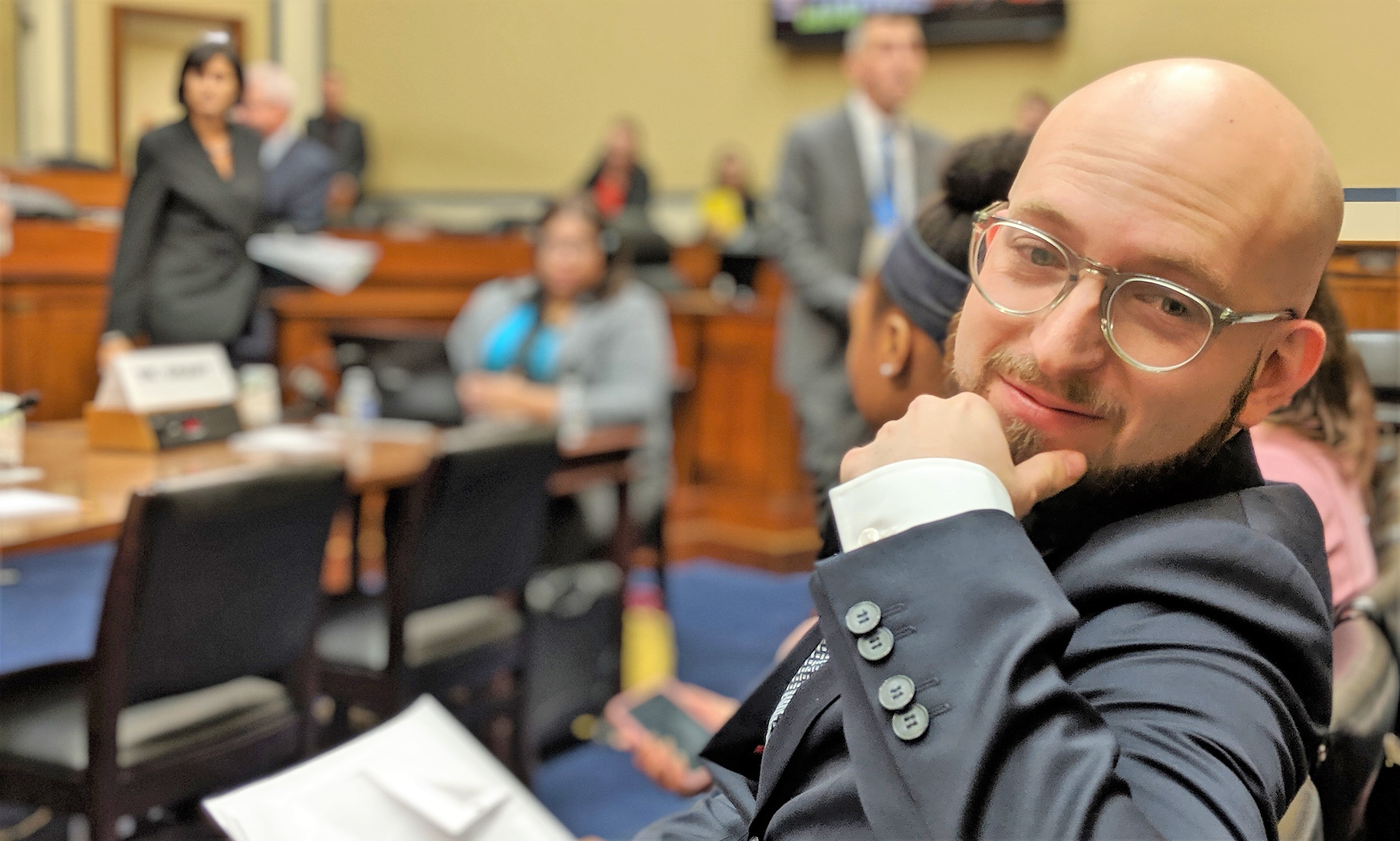 We’re finally inside and jockeying for the best seats, and I notice activist James Krellenstein having a rare moment of calm (before the storm). James is also behind the class action lawsuit filed this week against Gilead, and you are going to be hearing a lot from, and about, him, trust me. He’s a big piece of our activism future. Hell, he’s kicking ass right now. 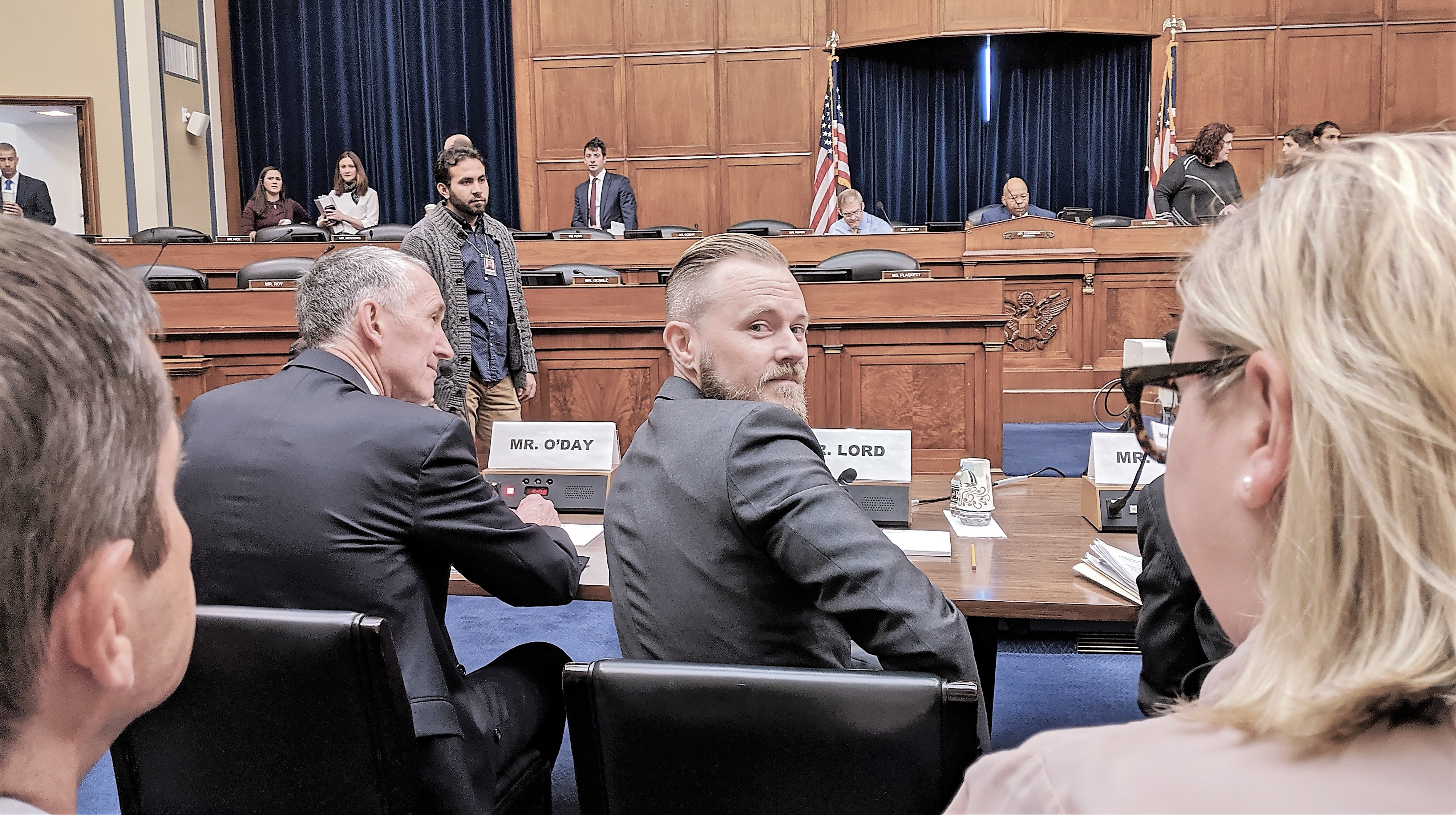 It is minutes before the hearing begins and I notice that Dr. Aaron Lord, our advocate and expert witness, is sitting right beside Gilead CEO Daniel O’Day. I had already read Aaron’s testimony online and he skewers O’Day. Well, O’Day probably read it, too. What no one expected was the heated exchanges between the two of them still ahead, when Aaron decided to stop letting O’Day blatantly lie or obfuscate, so he started interrupting and challenging O’Day. No one from the dais stopped Aaron from doing it. And we were squealing with delight every time it happened. 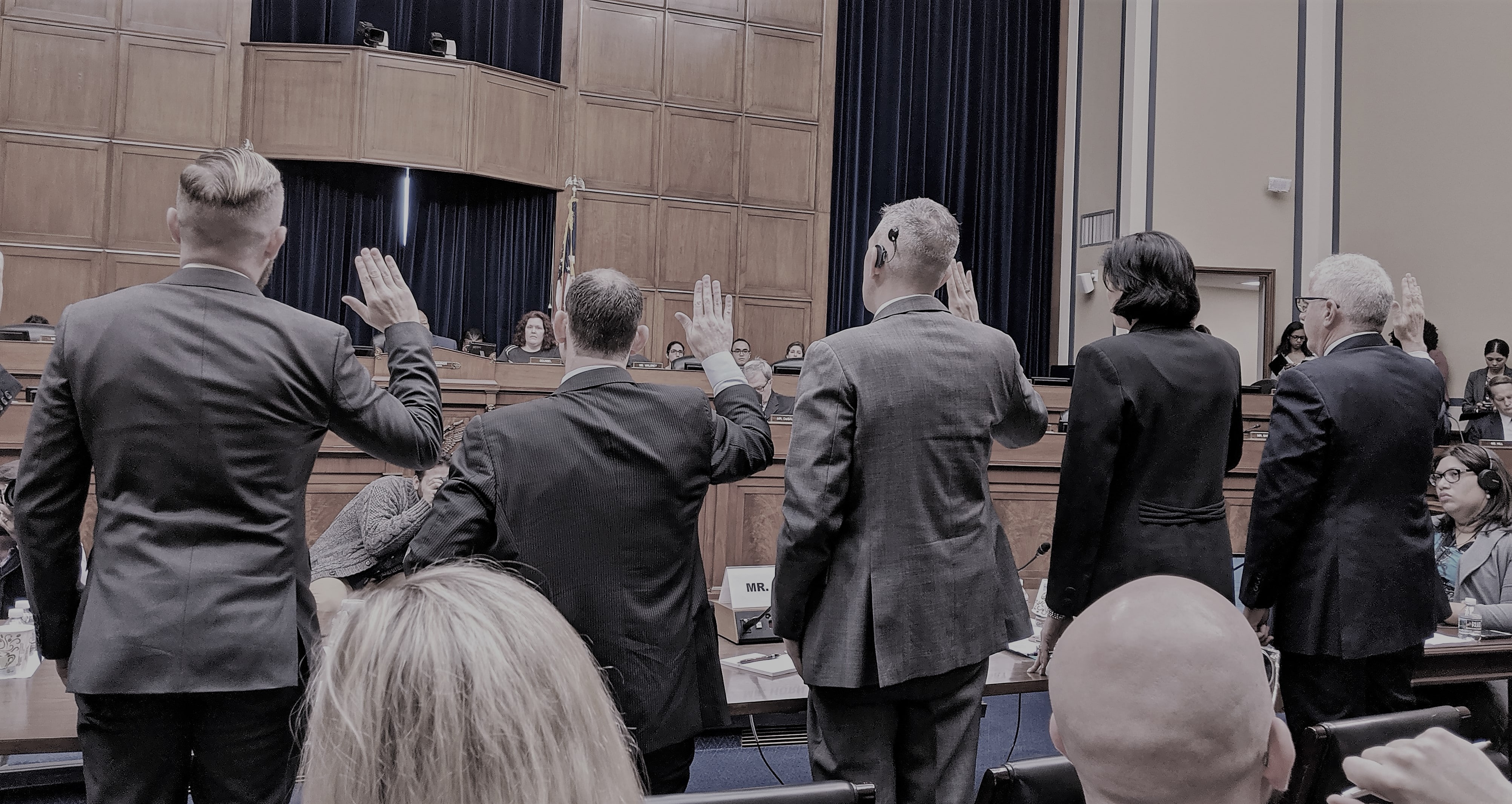 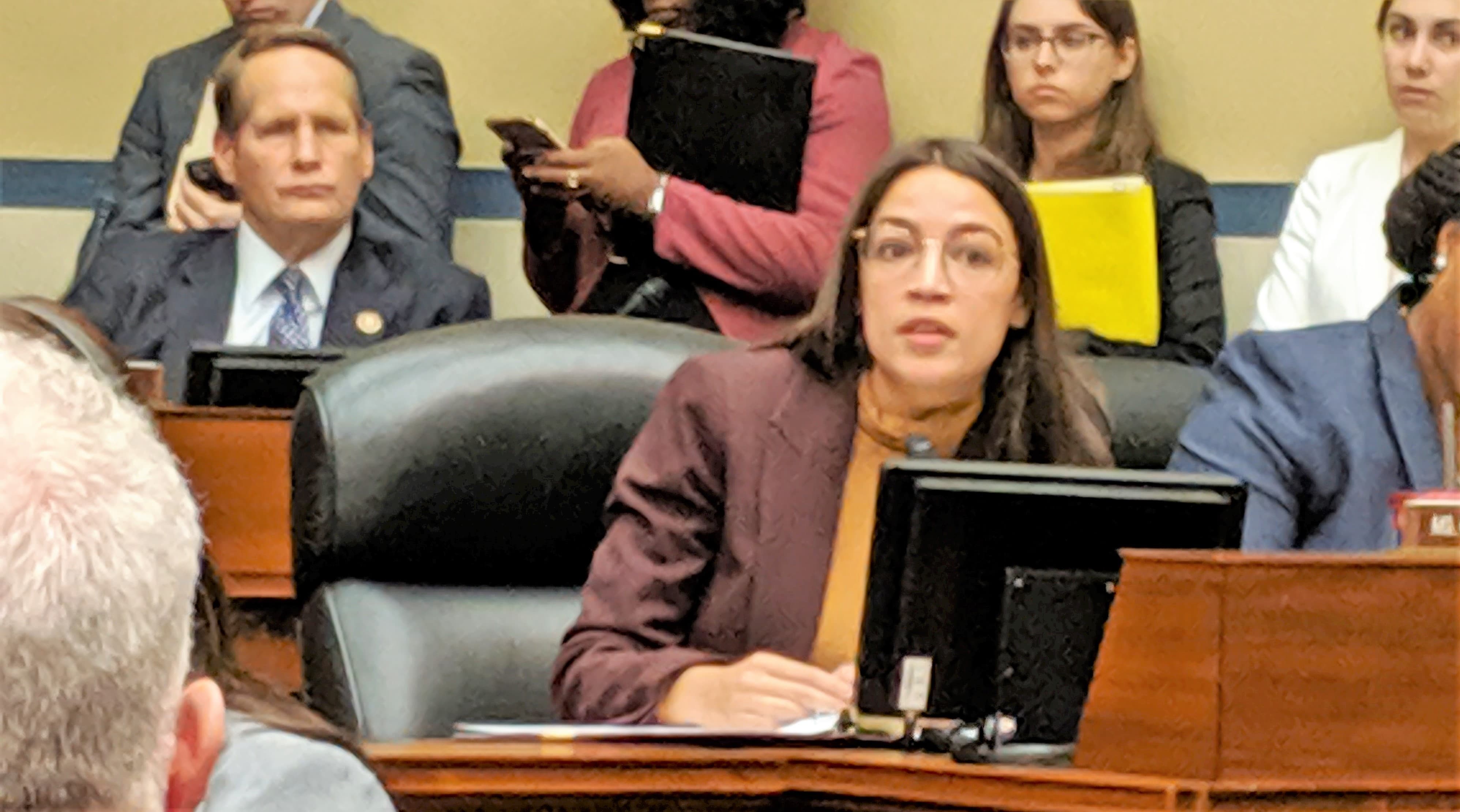 Rep. Alexandria Ocasio-Cortez deserves every moment of media attention she is getting. She put together this hearing and worked with activists to get educated and she was brilliant in her questioning. And her commitment isn’t likely to end with this hearing. She has opened a Pandora’s Pill Box, and I predict she will be an ally for many years to come. 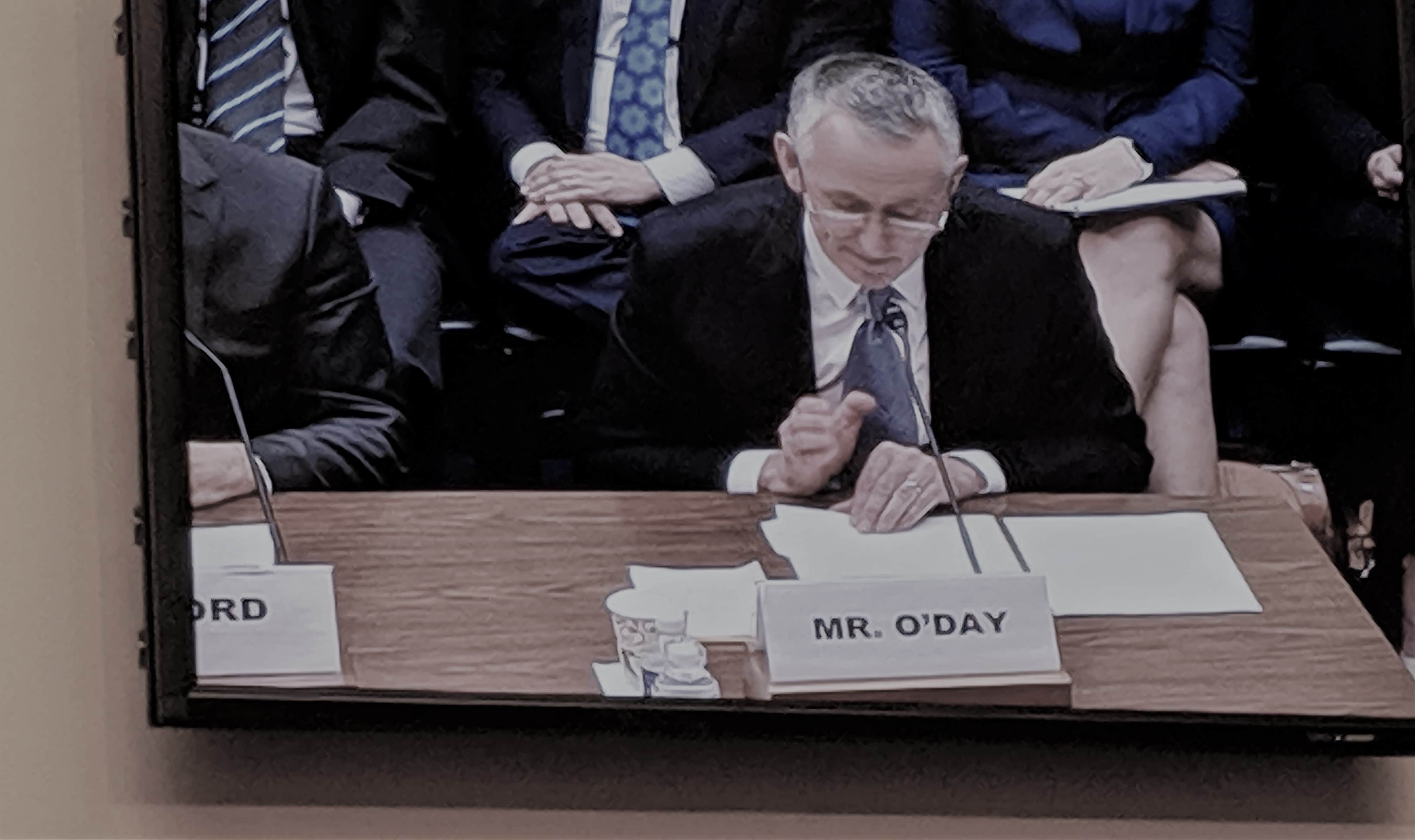 Gilead CEO O’Day was every bit as guarded and cautious and you might imagine. Just get out the door without Gilead stock falling, dude. That’s your only real agenda. 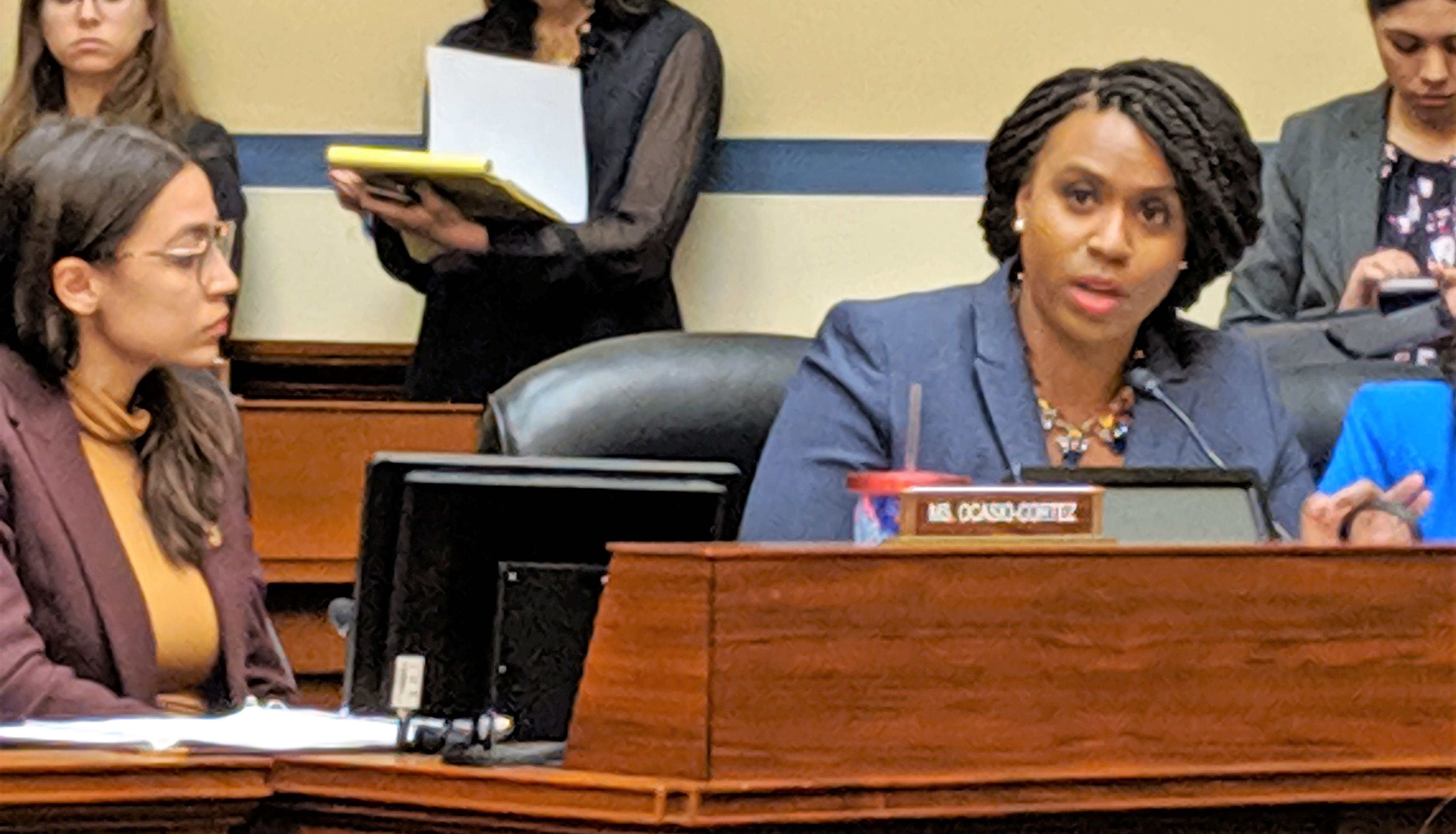 I was really impressed with Rep. Ayanna Pressley, another freshman congresswoman (she sat with Ocasio-Cortez and they looked tight). Rep. Pressley also demanded to know how Gilead would market more effectively to “queer people of color and black gay men” and I loved her so much for her language.

You know what the fixed cameras on television don’t show you?  The fact that Representatives and their staffers are often not in the room at all, especially about the time that attendees like us are starving and the officials have stepped out to make calls or grab a bite. Only Chairman Cummings never left his seat the entire day. 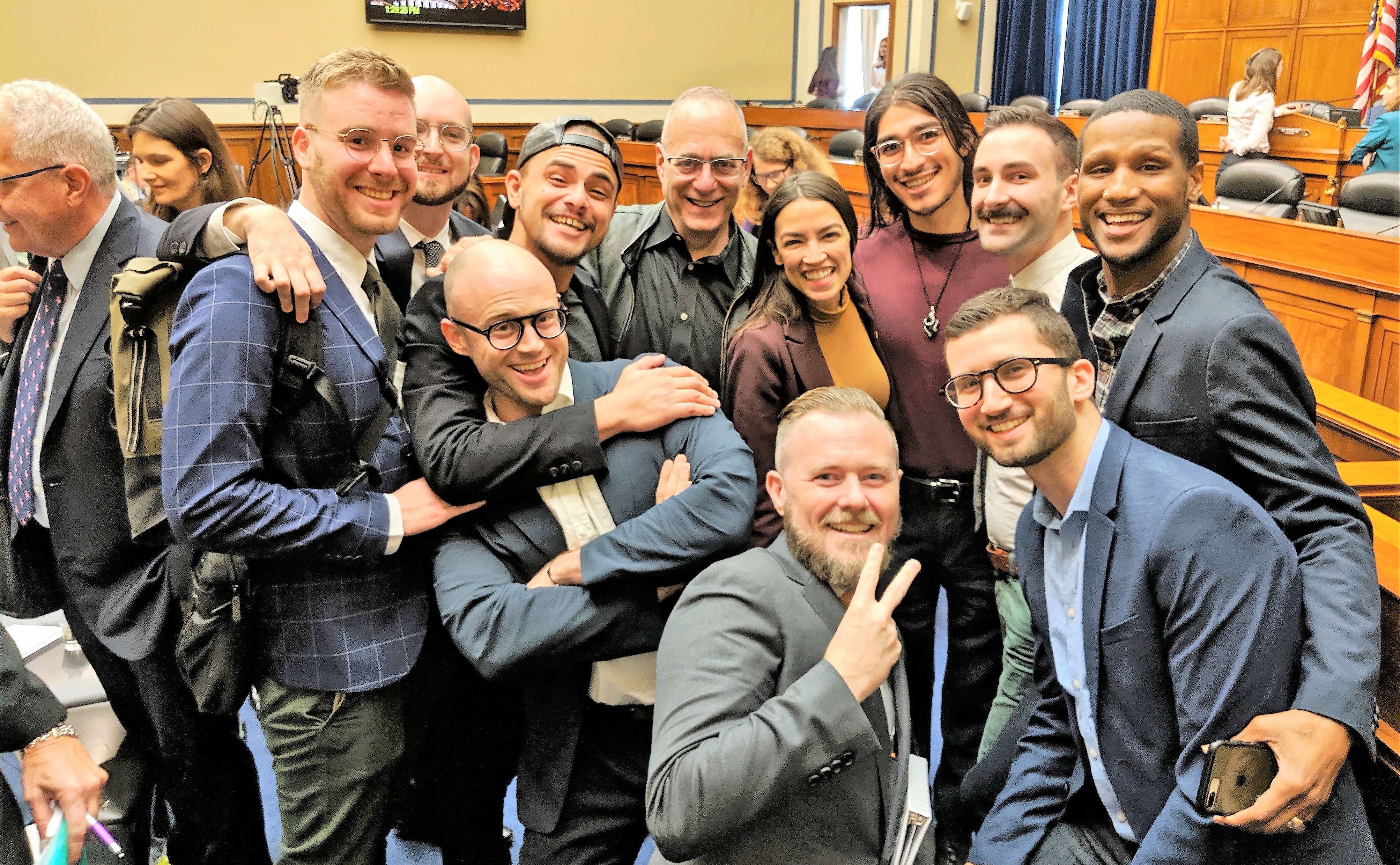 Once the hearing was over, we all got to mingle with our legislative heroes, and that included crowding around Rep. Ocasio-Cortez and grinning and saying “ACCESS!” She was gracious and warm with all of us. 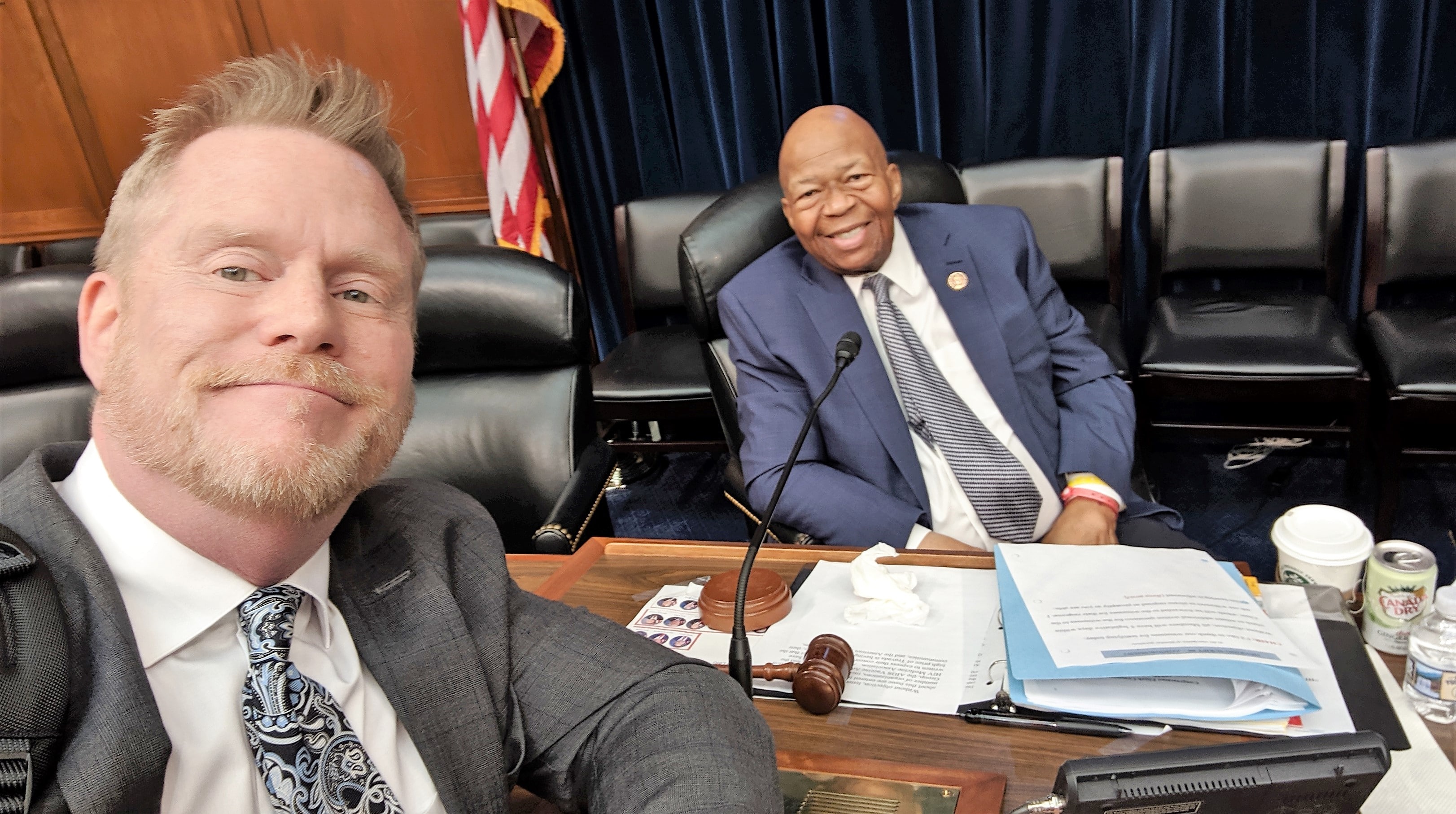 Even as the room was clearing, committee chair Rep. Elijah Cummings remained in his center seat, doing paperwork. I walked up the platform to him because I am a proud Baltimore constituent and had to tell him how heroic he has been. He’s been battling heart failure and had only been released from the hospital at 9am that morning to come to the hearing! I thanked him and told him please, please take good care of himself. We need his leadership so badly and need him healthy. 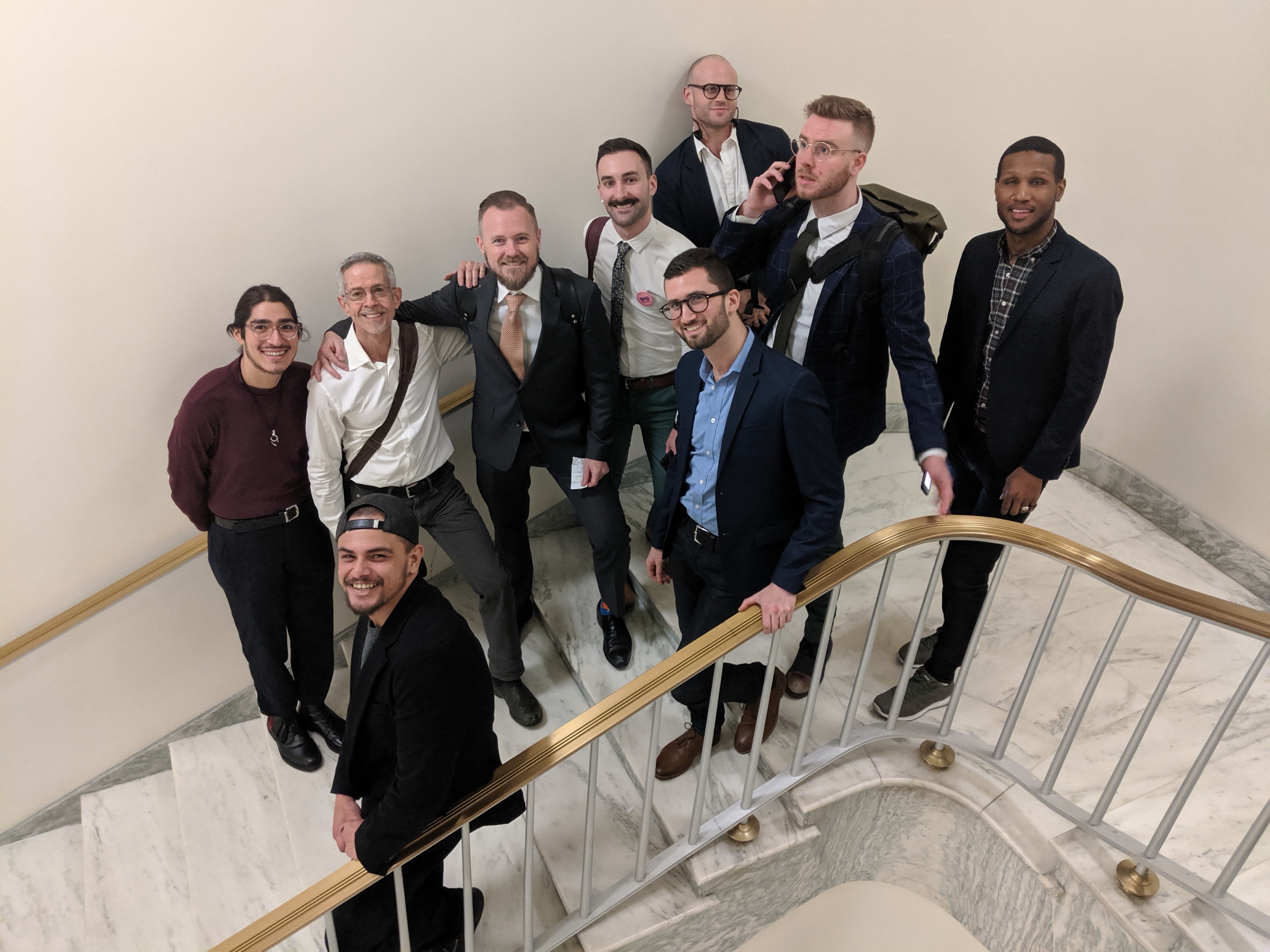 Peter Staley is a leader, so when he says, “follow me to the Mexican restaurant,” we follow, even if it means finding ourselves lost in a stairwell somewhere in the building and having to retrace our steps to find our way out. But face it, we’ll follow Peter Staley without hesitation. 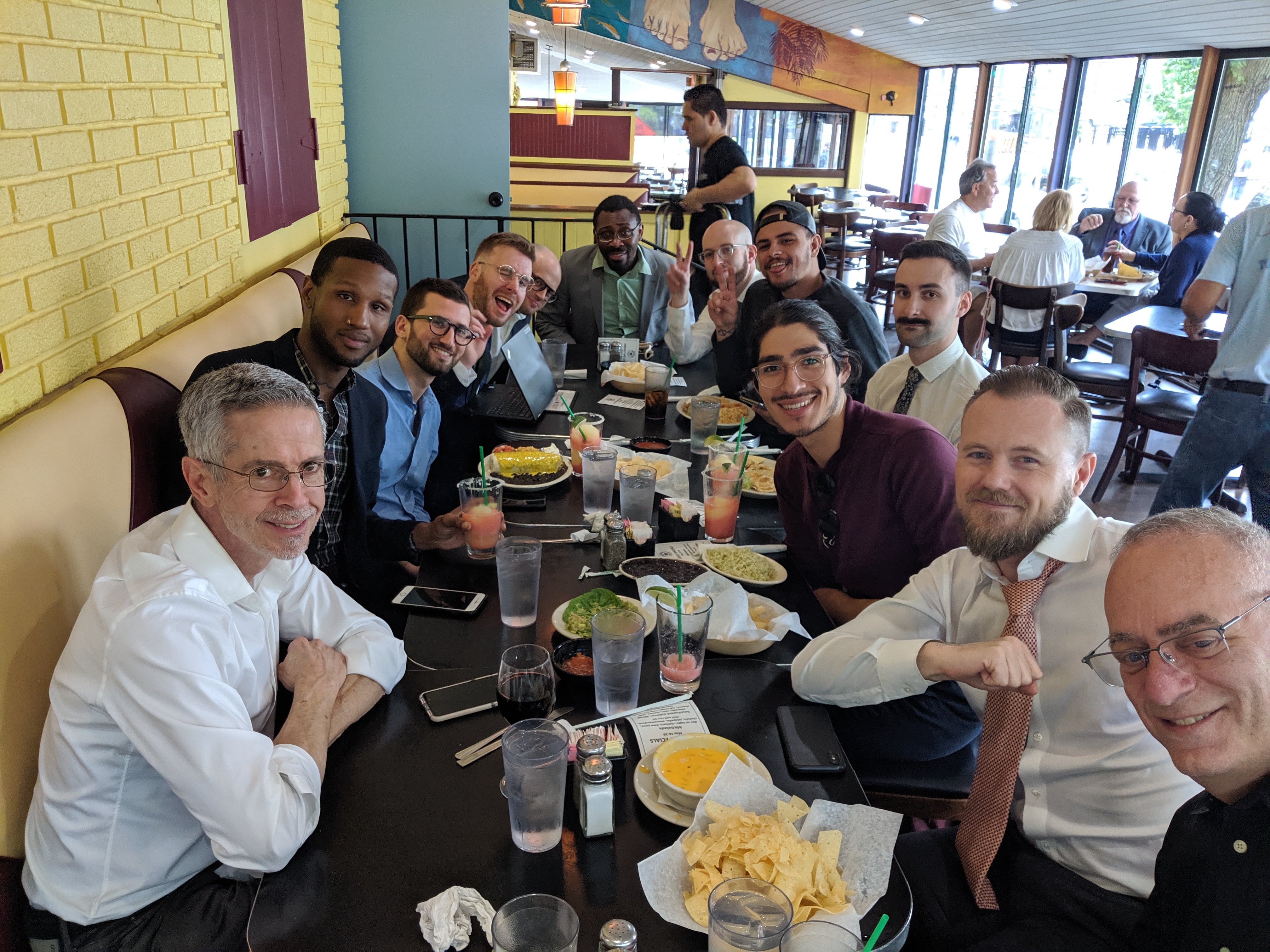 A bit bleary eyed but feeling satisfied, a large contingent woofed down nachos and colorful drinks and decompressed. There’s a lot to debrief, and many directions to take this advocacy. But for now, some merriment before making the trip home.

There’s a reason for the smiles on those faces, regardless of the immediate outcome of the day. This is the most fun you can have while changing the world.