Previous Next
Bridging the HIV Viral Divide with Friendship

Lynne Rhys and I were never supposed to become friends. It was just too unlikely.

She is a divorced woman raising a teenaged daughter, and was barely aware of a “gay community” until she stepped tentatively out of the closet in midlife. She has a quiet and soft-spoken grace. She has manners. She readily burdens the blame if it means saving your feelings. She’s one of those people who apologize when I miss a turn while driving us somewhere, as if it must have been her fault. 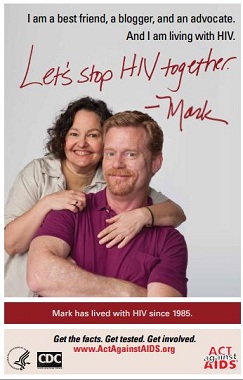 When she walked into an audition for a play I was directing a few years ago, she was certain she wasn’t good enough, but her insecurity was unacceptable to her – the struggle between her ferocious talent and her painful modesty has been waged her entire life – and she gave an audition of such humanity and pathos that I changed the script I had written to showcase her gifts.

“Stand slightly more to your left,” I would ask as we rehearsed. “I’m sorry,” would be the reply, to that or to any request or observation, including the weather. How could a creature of such obvious worth have such an absence of ego? I often wondered, before immediately returning to other, more important thoughts. About myself.

Two months later her performance was the kind that required the audience to listen closely, and they leaned in, drawn to her in the same way I was throughout the rehearsal process. She broke their hearts with such deliberate precision that people still speak of it.

Lynne doesn’t like talking about herself. But oh, how she loves to hear stories from Mark, and that’s when our budding friendship began to make sense to me. For hours I blather on, towering over her small frame, fluffing the curls on her head below me as she indulges my excesses and wonders when I will take my hands out of her hair. Please. I’m sorry.

I am the closest friend she has ever known to have HIV. Her personal knowledge of the crisis was largely limited to watching it unfold on television and thinking that people treated “that young boy Ryan White really badly.” So our friendship has meant lessons for her on t-cells, viral loads and why my medication bag is the same size as my gym bag. She listens and learns, and no longer believes that she must keep her distance when she has a cold or else I could die.

When the Centers for Disease Control and Prevention (CDC) asked me to participate in their new campaign, “Let’s Stop HIV Together,” I was impressed with their concept of pairing people living with HIV with an HIV negative member of their support system. The message is clear: we all share a responsibility for curbing HIV infections and supporting each other, positive and negative. And I knew right away who my “negative” would be.

Lynne was flattered and then questioned my selection, certain I must have better options. I knew that the woman who modeled humility to me every day was my only choice, and I insisted. The campaign involved visiting a production facility complete with wardrobe decisions, make-up artists, a photo shoot and an interview on video with both of us. She felt like the Queen of Sheba. Watching her was the very best part of the day, and the memory of it has brightened many days since.

In the photo of us, my cocksure grin and her enveloping embrace are the very essence of a friendship that I treasure deeply today. Seeing it in print has also brought to mind the many friends that came before Lynne who are now lost. But Lynne is not a placeholder and she is not a substitute. She is a gift of my survival, and the right friend at the right time to help me conduct my advancing years with more maturity than I might muster alone.

Moments after the photo was taken, Lynne slipped from the box on which she was standing and fell hard. Several of us rushed to help her, but she didn’t fret or make a sound. That is, except to say “I’m sorry.”

After a few days of pain, Lynne visited the doctor and discovered her foot was broken. “Why didn’t you say something?” I asked her, disbelieving, when she admitted it was hurting that day during our video interview. “Because I was afraid they might stop,” she said, “and I was having so much fun being with you.”

Much has been written by me about the “viral divide” between those who are HIV positive and those who are not. But not today. Today, the CDC has a new campaign with hopes of bridging this divide. On one of their posters, Lynne Rhys is beaming beside me, luxuriating in the joy of friendship, and confident that she is right where she belongs.

And she doesn’t look the least bit sorry.

(My thanks to the good people at the CDC’s Division of HIV/AIDS for their work on this campaign. Please visit the Let’s Stop HIV Together site, where you can watch videos from other pairings, download posters and other materials, watch the public service announcement, or “like” the Facebook page.)

Brace yourself, my friends. Beginning on Monday, July 23rd, I will be posting new video blogs daily, for the week of AIDS2012, the international AIDS conference in Washington, DC. I can promise you some lively, inspiring and colorful reports from the proceedings! This would be a good week to join us email list for alerts (at the top right of this page) or just keep a close eye on this space. I can’t wait!