Can I blame gay culture for my drug addiction, please?

Previous Next
Can I blame gay culture for my drug addiction, please?

After a lifetime of sporadic, recreational drug use, I became a full-blown crystal meth addict ten years ago, and then eventually got clean and sober in January of 2009. But why would I, or anyone as engaged in life as I was, morph into a drug addict?

It seemed an unlikely turn of events for a gay advocate and outspoken community leader living with HIV. Was my drug addiction some sort of post-traumatic stress from the AIDS horror show of the 1980’s?

Maybe it pre-dated AIDS, and resulted from the stress and shame of growing up gay. It’s easy to understand why anyone who came of age believing they were perverted (and going straight to hell) might need a stiff drink. Research indicates that gay men and lesbians are more likely to smoke, drink and use drugs. Was I born this way, GaGa? 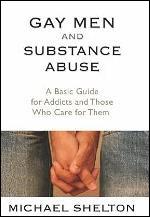 So I was immediately drawn to the new book, Gay Men and Substance Abuse: A Basic Guide for Addicts and Those Who Care for Them. I thought the book might bolster my hypothesis that I was a victim of gay culture and doomed from the start.

Because, my dear friends, even after more than two years living clean and sober, I still jump at the chance of blaming my behavior on something other than myself.

Alas, the book is a helpful, informative guide but it doesn’t let me off the hook. It hasn’t the least bit of interest in finger pointing. Instead, it offers practical information and advice about addiction, treatment, relapse and recovery ” written specifically for gay men and their families. I would strongly recommend it for gay lovers or allies trying to understand the addiction and recovery process, and required reading for those working in the field.

I spoke to author Michael Shelton, M.S., C.A.C., about the ways in which addiction and recovery are different for gay men, and he pointed out the importance of family support, and the fact that gay men often don’t have it.

“The number one precipitant for a person seeking help is family,” Michael told me. “If they have no close relationship with their family or a significant other, there’s no one on their back telling them to get into treatment.”

But what about gay culture itself? Michael wasn’t ready to make blanket pronouncements about gay culture’s perils, but he did note the connection between our preoccupation with sex and the almost mythical sexual reputation of drugs like crystal meth.

“We absolutely have created sexual monsters” he said. “I see these guys every week (in my practice), and the only way they can engage in sexual contact with another man is through the use of substances.”

Michael does allow that gay media plays a role in this hyper-sexuality. “The norms of our community say that one of the primary goals is hot sex as much as possible. Gay male culture is a hyper sexual culture. Pick up any gay paper and notice the sexual content.”

Michael was quick to add that “this doesn’t deny the fact there are many long term gay couples,” but that statement didn’t fit my agenda ” Gay culture contributed to my addiction! I had something to blame! ” so I ignored it and called my gay BFF Charles to announce my findings.

“Charles!” I began. I had caught him at a subway stop waiting to commute home from his governmental public health work. He does the green thing. “It’s no wonder I became a drug addict, Charles.”

“Really? How do you figure that?” he asked.

“Because I’ve been such a totally gay man!” I was lightheaded with blame deflection. “And being gay is all about hyper-sexuality and taking steroids and looking hot and dancing on boxes at circuit parties, just like I did. Oh, and don’t forget sex parties!”

There was silence for a moment. I could hear a garbled announcement on the subway speakers at his end.

Charles has never been fond of drugs. His sex life has been more conservative than mine, meaning, in the realm of sanity, and his party days consisted of dance floor celebrations that ended before last call. He’s never seen the inside of a sex club.

“Your view is so small, Mark. You think when you stopped that behavior and going to those placesâ€¦ did you think you had reached the far limits of gay culture?”

I was properly chastised. “Yeah,” I said. “I felt like that for a while.”

“Then welcome to the rest of the real world, Mark. Say hello to all the gays who have real lives and real jobs and are standing at subway stops waiting to get home to feed the cat. Is that not gay enough for you, because I’m not stopping at a bathhouse on the way home? I’m going shopping later to find a hippie outfit to wear to a touring production of Hair I’m seeing tonight. I’m thinking love beads or pooka shells. Gay enough? Or should I shoot up meth during intermission?”

“Gee, thanks. My train is here. Talk to you later.”

Charles did his usual stellar job of pointing out what should be obvious to me. My self centeredness and limited viewpoint keep getting in the way. There hadn’t been room in that view for other gay men who enjoyed lives without drugs or alcohol, or who were capable of using moderately.

There is a saying among people like me that we are not responsible for our addiction, but we are responsible for our recovery. It suggests that I should not blame myself for how I got in this predicament, and while I’m at it, I probably shouldn’t blame my local gay dance club, either.

My road to recovery as a gay man looks remarkably like the road everyone else must take ” paved with equal parts honesty, open-mindedness and a willingness to keep trying. That willingness, no matter how much I try deflecting and blaming others, is entirely up to one person.