HIV Criminalization Face-Off: One Poz Man and His Accuser

Previous Next
HIV Criminalization Face-Off: One Poz Man and His Accuser

What if you could witness a face-to-face confrontation between a man living with HIV and the sex partner accusing him of not revealing his status? Wouldn’t you like to be a fly on that wall? The fireworks could be mighty, as emotions raged between the furious accuser and the positive person trying to defend his actions. What might that meeting look like, exactly?

In this video, you’re about to find out.

Amidst the highly charged emotions of the HIV criminalization debate, “sides” are developing. One side believes that those with HIV who do not tell their sex partners about their status should go to jail. Period. But others claim that there is little public health benefit to laws against non-disclosure because they discourage people from getting tested – you can’t be prosecuted if you don’t know your status — and there are often prosecutions in which the risk of transmission is remote or even non-existent.

But taking firmly entrenched sides helps no one. We’ve simply got to get educated beyond our gut reactions to these prosecutions. We all could use more understanding about HIV criminalization laws, how they are being applied, and whether or not they are truly serving the public good. It’s also important that we understand the anger of those who feel they were put at risk and are seeking retribution.

A full list of HIV criminalization laws – and convictions globally (including for each of the states of the USA ) can be found at http://www.gnpplus.net/criminalisation/. To find multiple resources on what to do if one is at risk of prosecution, who to call for help, what the law is in every state, or get palm cards with links to resources, visit The Positive Justice Project. 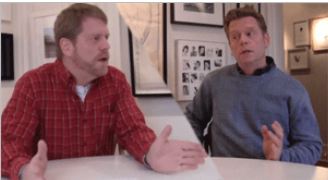 But back to the video: I couldn’t help but wonder what might happen if an HIV positive man had to sit down with his accuser and explain himself. So, through the magic of some creative editing, I produced this video episode of “My Fabulous Disease” to give a voice to the opinions and feelings of both parties. You can decide if I was successful.

I used this editing technique to comic effect in the “My T-cells Could Use a Facelift” episode (the infamous video about butt padding, among other things). I’ve been looking for a good reason to do it again, and I thought this topic fit the format perfectly.

(I’m always glad when you “share” my postings with the buttons below. But this post could mean the difference between someone understanding the law — and making a mistake that could land them in jail. So I encourage you to share and re-post this one in particular. Thanks.)