Gay Collective: “The Virus Divides. It Doesn’t Have To.”

Previous Next
Gay Collective: “The Virus Divides. It Doesn’t Have To.”

In a cramped meeting room in New York City on May 27, 2016, a dozen gay men, HIV positive and negative alike, came together to answer a vexing question: How do gay men bridge a divide that has been forged through decades of HIV stigma, distrust, and mutual blame? Or, at the very least, what might be done to start a conversation about the divide and begin to heal the wounds?

Convened by Avram Finkelstein, the HIV-negative artist and HIV activist who was part of the collective that created the iconic SILENCE=DEATH artwork in the 1980s, and Mark S. King, the HIV-positive blogger and advocate, the Viral Divide Flash Collective sought to begin a difficult conversation and find a graphic way to present it. The collective was sponsored by Visual AIDS and made possible through funding from Broadway Cares/Equity Fights AIDS and GMHC.

A “flash collective” is an exercise in artistic advocacy involving group facilitation and the common pursuit of a graphic message to communicate a concept for the public sphere. In other words, the gathering of gay men had mere hours to discuss the HIV viral divide, vent their frustrations about their lives and each other, and then find common ground. It was, in a word, intense.

Before the group even finished consuming their breakfast bagels, the walls of the room were covered in reams of butcher paper scrawled with the frustrations and issues viewed as crucial to members of the collective.

Important topics were raised, such as race, privilege, and the science driving the new HIV landscape. Again and again, the group talked through these concerns and then returned to their primary purpose of crafting a message about the viral divide among gay men.

“This message is the first sentence in a conversation,” Avram Finkelstein reminded the collective throughout the day. “It does not have to tell the entire story. It is meant as the starting point for important conversations.”

The result, HIV ÷, features the tagline, “The virus divides. It doesn’t have to. No walls between gay men.” The graphic image includes an animation that outlines the various ways in which the divide affects gay men: age, joy, relationships, sex, race, and love.

And the graphic image has an impressive coming out party on the way. It will be projected onto the façade of the Bronx Museum on July 13, 2016, as part of the opening of ART AIDS AMERICA, a retrospective of AIDS-related art through the years. The Illuminators, most widely known for their work projecting graphic messages on the New York City skyscape on behalf of Occupy Wall Street, will coordinate the projection. The work of the Viral Divide Flash Collective is viewed by the museum as the very latest in a history of AIDS artwork that dates back more than thirty years.

The Viral Divide Flash Collective has set up a Tumblr page featuring the final artwork and of the collective’s day together. Photos of the projection onto the Bronx Museum will be added after the event on July 13. Anyone is welcome to post their thoughts on the Tumblr page or to share the images on social media.

The HIV ÷ message comes just as gay men are grappling with a host of new scientific realities that are altering the social landscape.

The increased adoption of pre-exposure prophylaxis (PrEP) has re-energized activists and provided a way for HIV negative gay men to participate fully in their own HIV prevention.

Online dating apps, where divisions between HIV positive and negative gay men have been most prominently on display, have now incorporated profile choices that include being on PrEP or being HIV positive and undetectable. So there is movement afoot, even as HIV stigma remains a stubborn roadblock to bridging the viral divide.

It would appear that now, more than ever, gay men can relieve themselves of the social walls that have divided them along the lines of their sero status. The HIV ÷ graphic message is only a small part of multiple efforts to repair relationships among two factions of gay men that have often been at odds with one another.

After so many years of mortal fear, irrational and otherwise, bridging the viral divide will surely be easier said than done. The members of the Viral Divide Flash Collective have started an important conversation. It will be up to countless others to continue it. 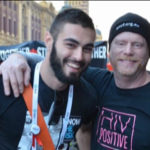 I could not be more excited about returning to the international AIDS conference next week. AIDS2016 in Durban, South Africa, is sure to offer exactly the kinds of sights, sounds, and people that I love capturing in my video blog coverage. I am proud to have the sponsorship of MSMGF, the global organization working for the health and rights of gay men (men who have sex with men) around the world. Beginning with pre-conferences that begin on July 16, you will be able to follow my coverage on the MSMGF site or by checking in with TheBody.com, the most comprehensive HIV site anywhere. As with my past conference coverage, I leave the research and panels to others, while my trusty camera man Theodore and I train our sights on the colorful people who make this conference like none other. See my teaser video here, and wish me luck!