I Lost My Mind… Until the NIH Found It

Previous Next
I Lost My Mind… Until the NIH Found It

When I moved to Los Angeles in 1981, my first job as a struggling actor was making popcorn at the Chinese Theater on Hollywood Boulevard. My encounters with celebrity was limited to serving Diet Cokes to the occasional sitcom star. 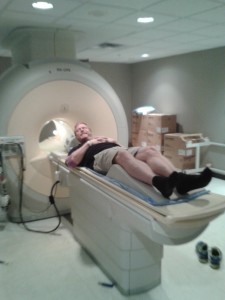 Until, that is, one day when I was hanging out in front of the theater browsing the cement footprints. A Rolls Royce pulled along at the curb, slowed by traffic. In the back seat, just feet from me, sat iconic star Carol Channing. She seemed as charmed by the famous movie theater as anyone else, and her enormous eyes took it all in, up and down, from her seat in the Rolls.

I was starstruck. And then, almost immediately, a compelling thought came to mind.

Her window is down, I considered. I could kill her. I could lurch toward that car right now and strangle her. It would only take a minute. But then I would be the guy that killed Carol Channing, and that would be awful. So I guess I won’t.

My boyfriend was understandably disturbed when I made this admission to him recently. He eyed me warily and it actually appeared that he moved back a step. Then he asked if I was watching too many horror movies. But to tell the truth, I get these fantasy compulsions all the time. Always have.

They’re not always homocidal, mind you. Sometimes they’re merely suicidal. I can’t stand high above ground without the urge to jump. Rooftop decks and tall stairwells get my imagination perculating, and I will consider the jump, the fall, and the aftermath. I even feel my muscles urging me to climb over the railing.

This aspect of my twisted psyche, at least, isn’t uncommon. Studies show that the urge to jump is shared by a great many of us, and one particularly comforting study suggests that this compulsion is actually an indication of our strong will to live. By confronting the urge and then deciding against it, we are confirming that life is better just as it is. So, I’m not morbid at all, people. I’m fabulously alive.

Nevertheless, it was with some trepidation that I agreed to participate in a study for the National Institutes of Health (NIH) on cognitive function in people living with HIV. Would they find gruesome thoughts floating around in my brain? And more importantly, would they find my brain?

The NIH staff coordinator, Sally Steinbach, treated me with great care over two days of testing. I had to really psyche myself into spending 90 minutes in an MRI machine and, after the initial panic of being rolled into the barrel of the enormous device, I happily sang the entire score of the Broadway musical Gypsy to pass the time.

The second day was filled with memory games and “which one is not like the others?” tests. The NIH is careful to point out that these clinical research programs are not meant to offer any benefit to participants other than the pride of knowing you are making a contribution, although I was paid several hundred dollars for lending them my noggin.

You can participate in this study, too. If you live in the Washington, DC, area just contact the NIH Recruitment Office at (800) 411-1222 and ask for study number 13-N-0149. They have exhausted their allottment for travel from outside the area for this study, but visit their web site for other studies they are doing and you may find one that includes travel from elsewhere in the United States or that has satellite programs. They also have a site that can tell you about studies happening worldwide.

Complete medical and testing results are shared with your physician, although mine has been tight-lipped about the relative chances that I’m a complete psycho.

All I want to know is whether or not Ms. Channing is safe.