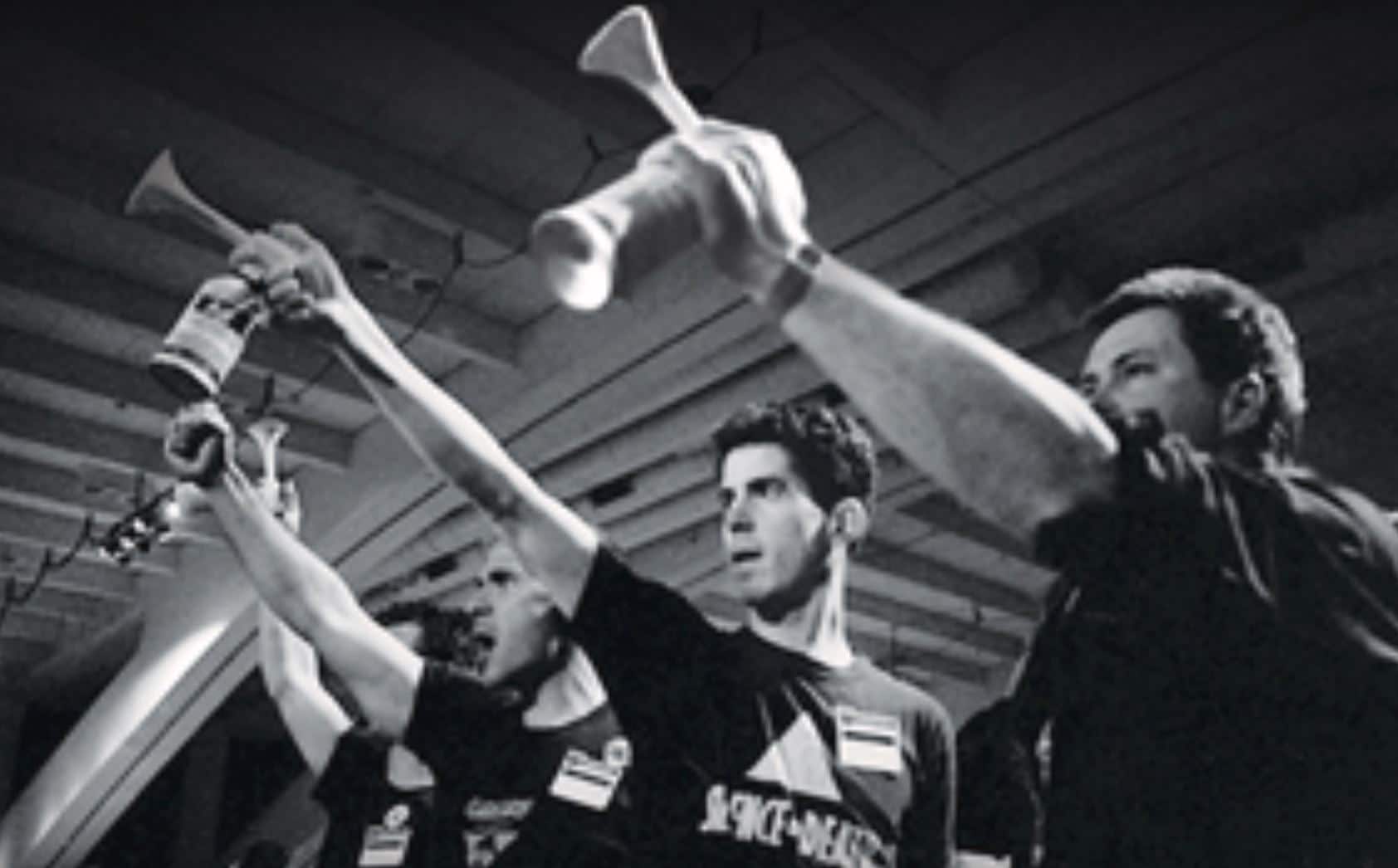 Activist Peter Staley’s much-anticipated new memoir, Never Silent, opens with almost unbearable nail-biting suspense, sweeping us into the behind-the-scenes machinations of an ACT UP takeover of the New York Stock Exchange at opening bell. It’s legitimately dangerous, timed to the second, and absolutely thrilling, written with the intensity of a spy novel.

For that matter, the phrase “No Time to Die” more perfectly captures the haunted and mortality-driven triumphs of ACT UP better than any of the antics James Bond might conjure.

Staley is just getting started, with nearly every significant ACT UP action of their heyday re-lived in vivid detail on the pages that follow.

Along the way, Staley shares the backstage planning, the ego clashes, and his own growing confidence as he transforms himself from a closeted gay man on the road to corporate slavery into an activist proudly living with HIV who terrified and negotiated with the highest levels of our national and international healthcare systems.

Many a community advocate will recognize the constant tension between grabbing the limelight for the greater good, as Staley, a self-proclaimed “media whore,” does so expertly, and his own self doubts as he faces the passive jealousies and second-guessing of others. When he was right and when he was wrong, Staley copped to his faults but kept moving forward. 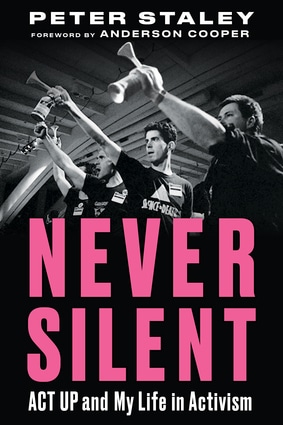 There is a generosity of spirit that permeates Staley’s reminiscences. For all the fear ACT UP engendered during the height of their visibility, Staley has few scores to settle in Never Silent. He doesn’t have his friend and mentor Larry Kramer’s destructive capacity to lash out in anger or righteous indignation. As much as he clearly loved Kramer, Staley sees each of the protests as a means to an end, always working an “inside track” within institutions he hoped to change while protests – sometimes quite literally – raged outside their doors.

Staley was always a bridge-builder, a trait that would eventually lead him away from ACT UP and to his co-founding of Treatment Action Group.

Staley’s writing on his own struggle with crystal meth is particularly moving and shows a deep and earned humility. It confounds him that his addiction couldn’t be beaten through a lively protest or the sheer force of his considerable will. These passages bear the scars of the meth crisis among gay men, and the parallels with the AIDS crisis – such silence in the face of suffering – are pointed and heartbreaking.

The version of Peter Staley, then, that has been seared into our consciousness via iconic photographs and his central place in the documentary How to Survive a Plague, is a partial view and Staley is clearly anxious to show us the rest – his coming out, the sexuality he enjoyed before and after his diagnosis, and how AIDS flipped the table on his Wall Street aspirations.

The issue of privilege – the gay white men who almost exclusively populate Never Silent – is addressed inasmuch as Staley acknowledges his own, repeatedly. In light of Sarah Schulman’s recent book, Let the Record Show, which challenges the dominant narrative of gay white men as singular AIDS activism saviors, Staley’s account may leave some readers wanting more on this topic, but Staley chooses, perhaps wisely, to leave that particular historical excavation to others.

Is Never Silent, then, the work of a lion in winter? Hardly. In a legal fight happening right now that could mean eye-popping monetary settlements, Staley is the lead plaintiff against multiple pharmaceutical companies for anti-competitive practices, in Staley vs. Gilead. Never Silent is a title that lives very much in the present tense. Staley isn’t nearly done with history.

p.s. And, because I finished Never Silent while visiting family in Alabama, here’s a photo of me reading it on a tractor. 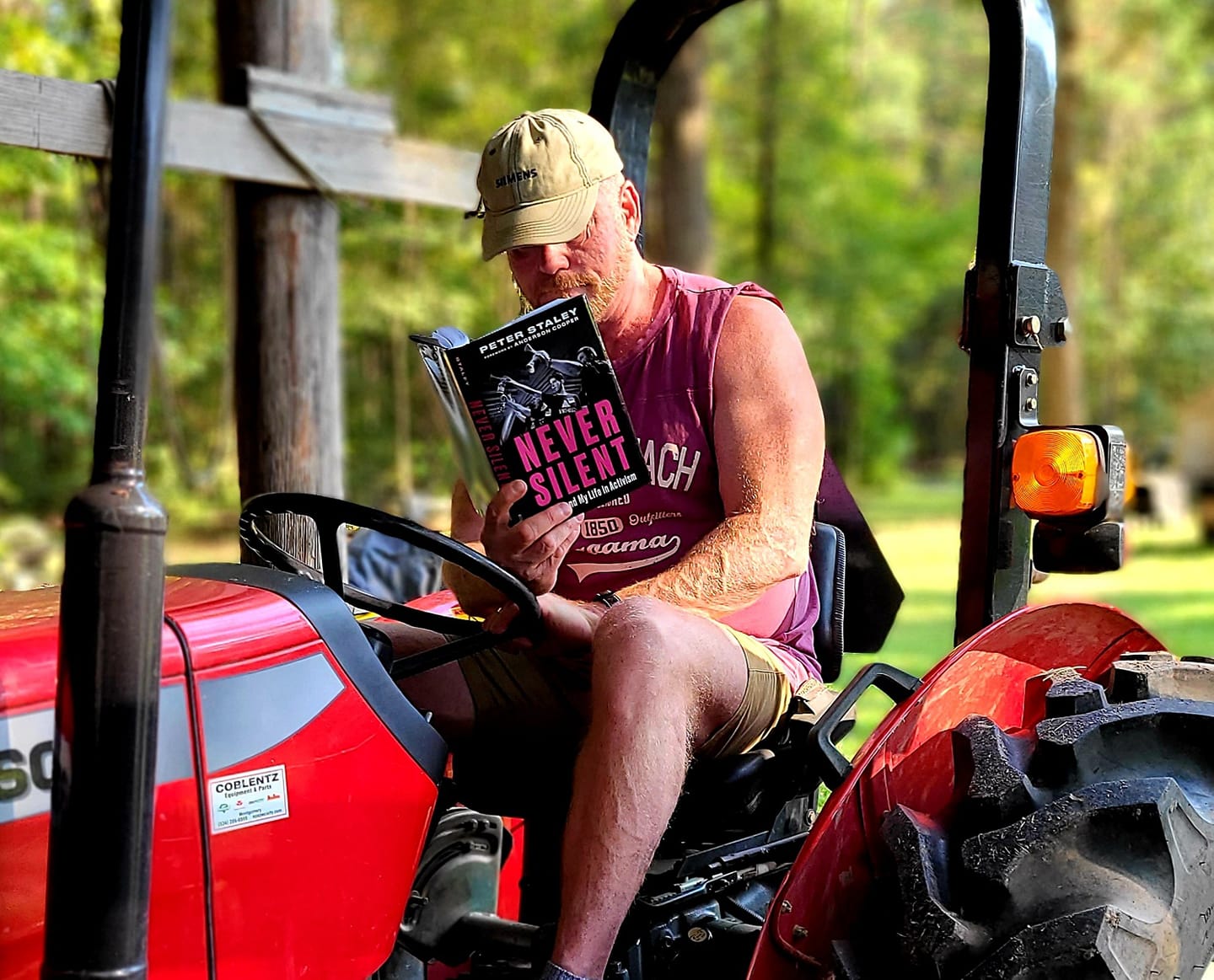