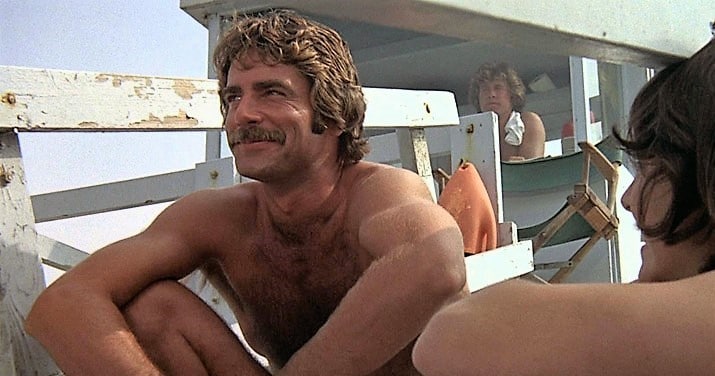 A moment of reverence, please. In 1975, I went to the movies and discovered everything I needed to know about men, sexual allure, chest hair and the masculine ideal that would fuel my fantasies for the rest of my natural life. The film was Lifeguard and the star was Sam Elliott.
You unfortunate folks under 40 may only know Elliott from his more recent roles, typically as a gruff, western-styled codger with a handlebar mustache and a low voice like thick maple syrup with pecans mixed in. In that case, you’ve missed the early career of the man that set the gold standard (his current-day career ain’t too shabby either, considering his Oscar-worthy supporting role in Bradley Cooper’s remake of A Star is Born.)
Before there was Tom Selleck and long before the Baldwin brothers, there was only Sam.  He mirrored the swarthy stars of gay porn flicks of the time, stars with names like Jack Wrangler and titles like Kansas City Trucking Company. But Sam’s good looks were more intense and he was, of course, more unattainable. The glamour of mainstream Hollywood film making may have polished his sheen, but Sam’s knee-weakening smirk and that twinkle in his eye did all the heavy lifting.
Sam Elliott never exploited himself as a sex symbol, and his style is so laid back it’s possible to imagine he might not be aware of his own magnetism. Well, possible, but unlikely. He’s also a family man, having been snagged early by fellow seventies icon Katherine Ross, who probably hasn’t left him alone a single moment since they were married in 1984. The fact he has a longtime, successful marriage and has been without tabloid shenanigans makes him all the more endearing. 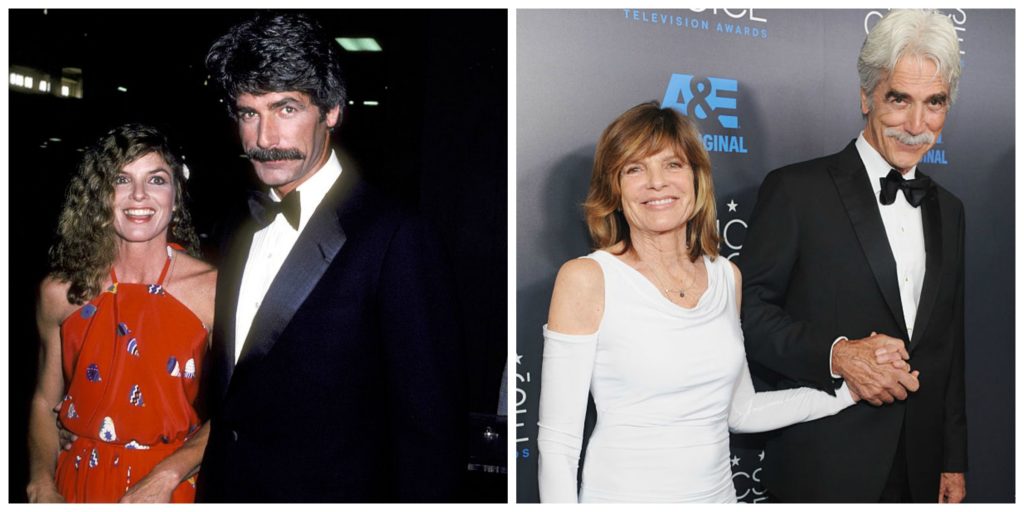 In the late 1980’s, during the darkest, brutal years of the AIDS epidemic, my brother sang in a gay choir in Los Angeles that was asked to perform as part of a display of the AIDS Quilt. Hollywood was fraught with grief and the biggest stars regularly attended such events.

On this night, seemingly every star of every caliber was there, including the gorgeous couple Sam Elliott and Katherine Ross.
Just as the program was about to begin, an electrical outage plunged the venue into darkness. Unable to proceed, organizers apologized and invited everyone to return the following night.
My brother and his choir returned. The Quilt returned, as did grieving families and supporters. But none of the stars returned, either committed to other appearances or knowing the media coverage would be diminished. None of them, that is, except Katherine Ross and Sam Elliott, who sat through the entire program and then chatted with fans for some time afterward.
It may spoil my lifelong crush to admit this, but those are two very fine people and they deserve one another.
I’ll just sit here quietly, and continue to worship Sam Elliott from afar.