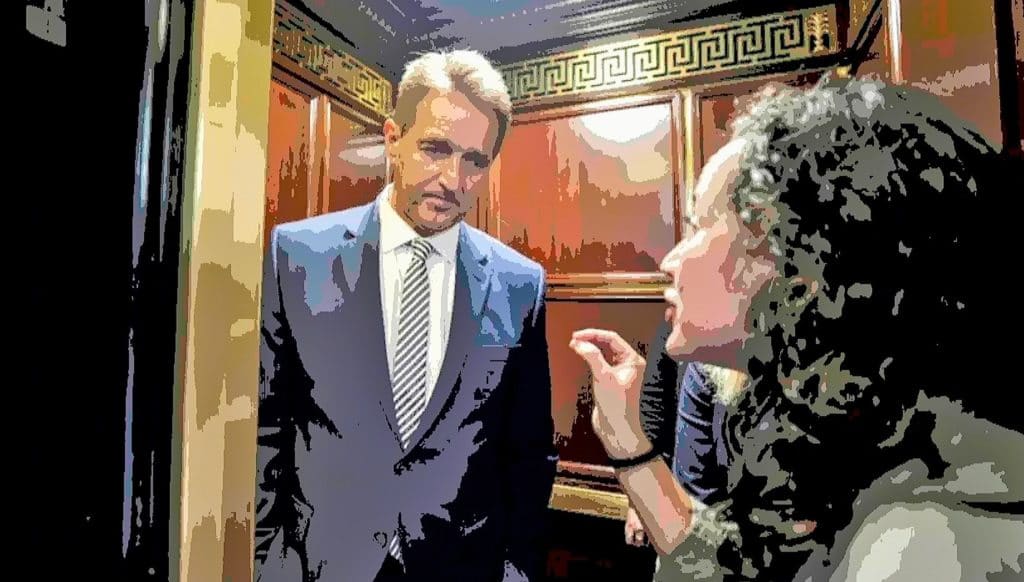 Very little happens by accident. The most iconic moments in HIV/AIDS activism – the appearance of the early SILENCE=DEATH meme, the footage of AIDS activist Peter Staley being peeled from a building during a protest, the photos of Sen. Jesse Helms’ home wrapped in an enormous condom – were the product of weeks of careful planning and design.

So, too, were HIV activists involved in the soul-gutting footage of women confronting Sen. Jeff Flake in an elevator during the Brett Kavanaugh hearings. It’s a fascinating story.

At the recent “We, the Positive” summit in Jackson, Mississippi (hosted by the Mississippi Positive Network and My Brother’s Keeper), fledgling HIV activists were treated to a presentation from Charles King of Housing Works, who explained exactly how the Jeff Flake Moment was accomplished – and how others (maybe someone just like you) can create their own.

The moment was created through an activism tactic known as “birddogging,” according to Charles King. “The term was first developed when a group of activists confronted Al Gore during his announcement of his candidacy for President,” Charles explained to me at the Mississippi summit. Activists showed up early, wore Gore t-shirts and appeared terribly enthusiastic. They were given prime space in front of the crowd standing just behind Gore during his announcement, and then presto! they unfurled a banner advocating for generic HIV medications. Birddog accomplished.

When Kavanaugh was nominated for the Supreme Court, people from the Women’s March and Ultra Violet joined a larger group known as BirdDog Nation, which is coordinated by Housing Works and the Center for Popular Democracy. According to the BirdDog Nation site, “Birddogging is when you ask a public official or aspiring candidate to do something you care about, in-person, and in-public.”

And boy, did they do it publicly. 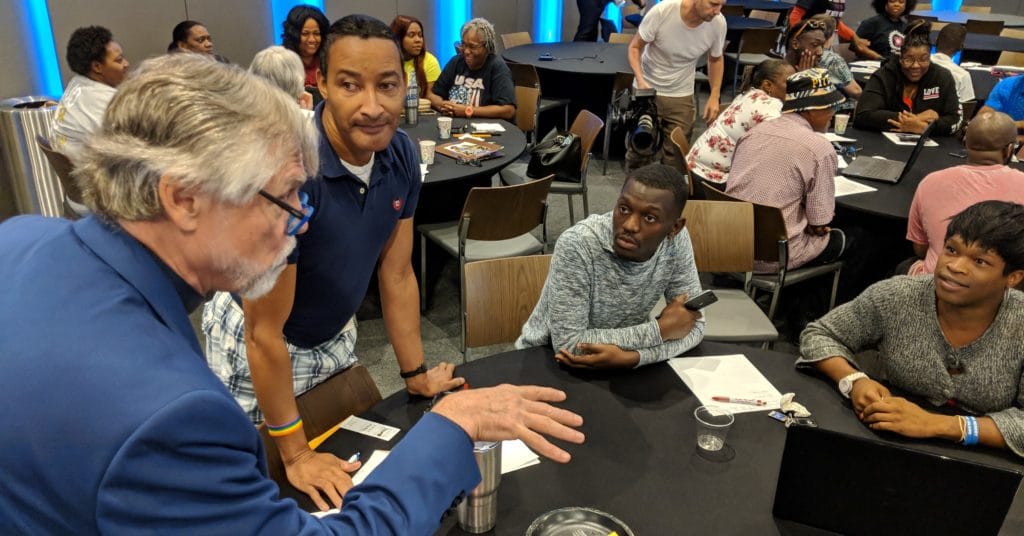 “We focused on bringing in women who had stories to tell,” Charles told me. “Our number one emphasis was getting into senator’s offices and allowing women to tell their stories. We flew in women from Senator HeitKamp’s state to share their stories with her, and after that meeting she announced she was a ‘no’ vote.

“Where folks wouldn’t listen to us, we started doing sit-ins in their offices. The third layer was the mass protests.

“As things started getting more intense, the police started putting perimeters around the hearing room. You couldn’t get access. That’s when we started stationing people at the elevators and in the stairwells. No senator was going to get into that hearing room without passing women who had a story to tell.

“We packed the elevators. We were riding up and down inside the elevator, in multiple banks of elevators. In each elevator were women ready to tell their stories. With the ‘senate only’ elevator, we couldn’t be inside so we were stationed outside them.”

During the Jeff Flake confrontation, Charles was actually in jail, arrested among the throng of activists who had been protesting. But he knows how the Flake Moment went down.

“Flake was leaving his office and headed to the hearing room,” Charles said, “and somebody just stuck their foot out and held the elevator door open.”

The rest is activism history. Ana Maria Archila and Maria Gallagher spoke out, emotionally and forcefully. “Ana Maria Archila is one of the founders of Make the Road By Walking, an affiliate of Center of Popular Democracy,” said Charles. “She’s obviously very experienced. She was the first voice. Maria Gallagher was the second voice, sobbing as she was speaking, giving that heart wrenching ‘don’t look away.’”

Contrary to conservative propaganda, these were not “paid protesters.” Everyone involved showed up because they believe in their cause and in their civic duty to speak out.

There is support for you or your organization if you would like to learn how to get the attention of your elected officials and do so in a public way. “If someone organizes a group of 20-30 people in their town who will commit to a two-hour training on birddogging,” Charles said, “we will send somebody anywhere in the United States. We will come to them and train them. We have trainers around the country.” They also have a handy “Birddogging 101” tip sheet available.

Many of the birddogging citizens, like Charles King, come from the HIV activist community. Upon arriving in Washington, DC, to advocate against Kavanaugh last week, Positive Women’s Network Executive Director Naina Khanna found herself in the same airport as Majority Leader Mitch McConnell. Out came the camera phones as Naina went to work with other survivors of assault as they followed McConnell through the airport. His silence in the face of their questions was deafening.

A documentary film is actually being produced that follows the work of the Center for Popular Democracy and their birddog tactics, and their IndieGoGo fundraising campaign is well on its way to its goal.

Whether you attend a public event by an elected official or candidate or you spot one on the fly, you can learn how to make the most of your proximity to them. Check out the helpful links at Birddog Nation or, if you want to schedule a training for your group, contact Jennifer Walker at the Center for Popular Democracy (jflynn@populardemocracy.org) or Paul Davis at Housing Works (p.davis@housingworks.org).

Are you registered to vote?

Thanks for reading, my friends, and please be well.

p.s. For years, HIV advocates Robin Webb and Cedric Sturdevant were the only two people in the State of Mississippi who would publicly appear as persons living with HIV. Their efforts to change that resulted in the “We, the Positive” summit last week in Mississippi. Huge congrats to them for their amazing work.