Previous Next
The Italians Honored World AIDS Day with Heart, Music, and Activism 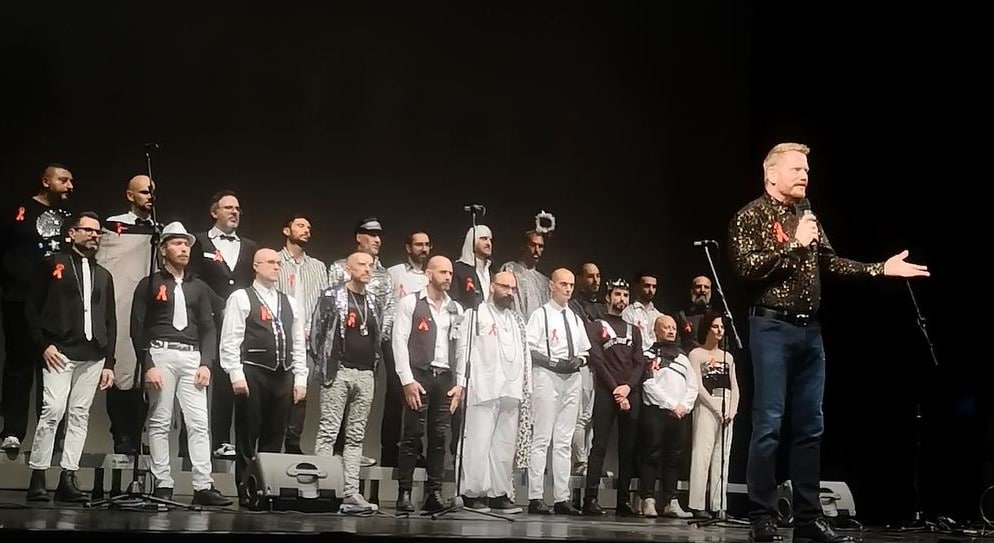 With KOMOS, the LGBTQ choir of Bologna, Italy, as I bear witness to the HIV epidemic during their World AIDS Day event on November 30th, 2019.

What a distinct pleasure to be in the company of spirited Italians for the week of World AIDS Day in early December. I was honored to be the guest of Plus Onlus, their national coalition of gay men living with HIV and their allies, and on Saturday, November 30th, they joined forces with KOMOS, the Bologna LGBTQ chorus, for a night of music and advocacy that I will not soon forget.

My role was to present three segments to the audience which filled the Teatro Testoni to the rafters; the past, present, and future of the HIV epidemic. I was joined onstage by the charming Giulio Maria Corbelli, my host and translator, who gamely passed on my stories of mortality, survival, hope, and renewal to the audience.

I have so much more to say about the visit, including an emotional night among thirty gay Italians living with HIV, but for now, allow me to share some highlights of the World AIDS Day event itself. 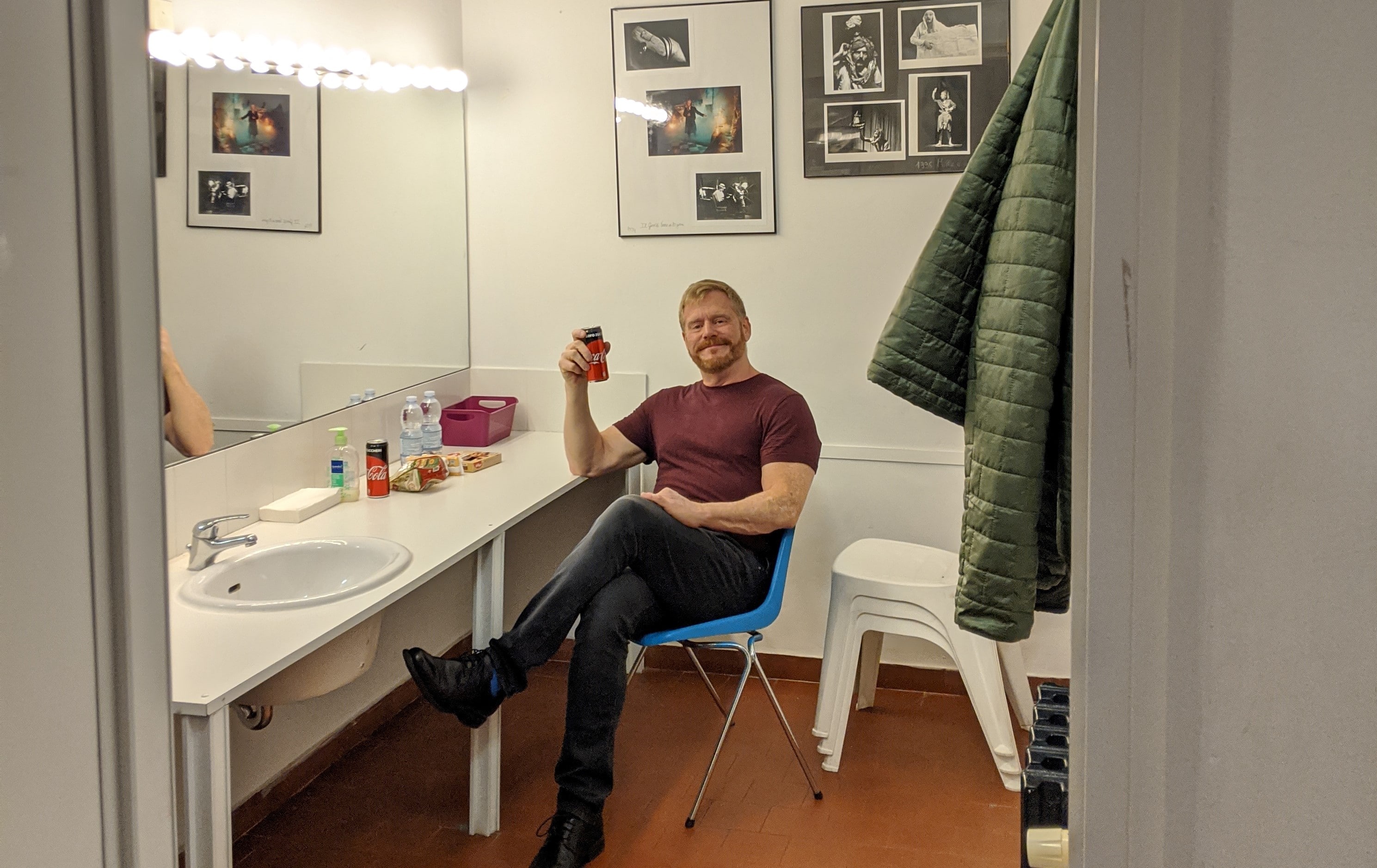 When you live long enough with HIV, you get your own dressing room with a star on the door. 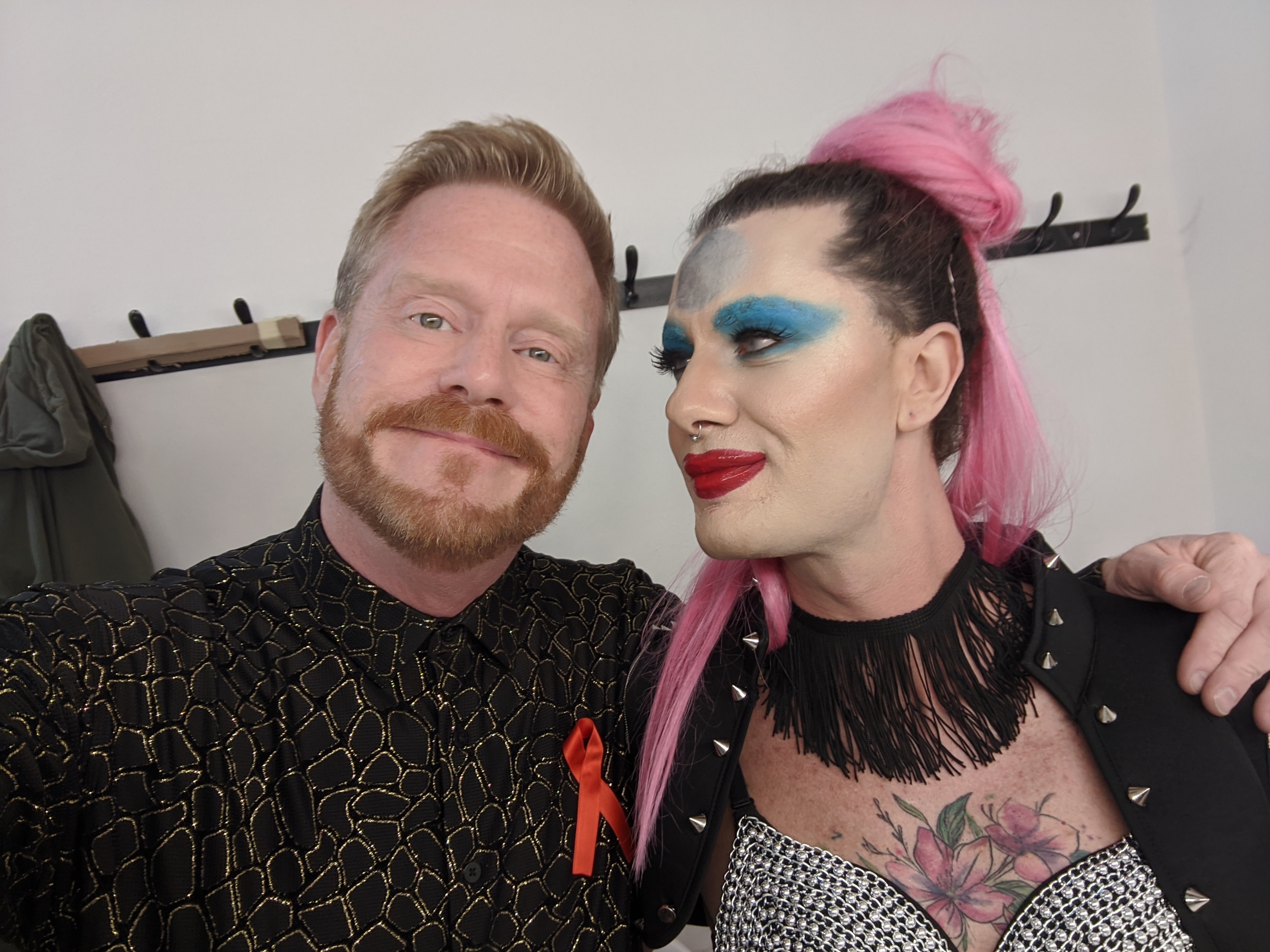 One of the performers at the event included Paula Lovely, a “dragtavist” who brought the crowd to its feet with her singing and candid observations as an outspoken queer person living with HIV. As you might imagine, we had an immediate connection.

My first segment was devoted to “the past,” in which I shared what it was like to make it out of the 1980s in one piece. Interestingly, the epidemic didn’t take hold in Italy until at least the late 1980s, so there was a more narrow window of mortality before life-saving medications arrived on the scene. Many Italians who are involved in the HIV community have never known someone lost to the disease. They were utterly silent during my recollections of the early days, and clearly aware of their good fortune. 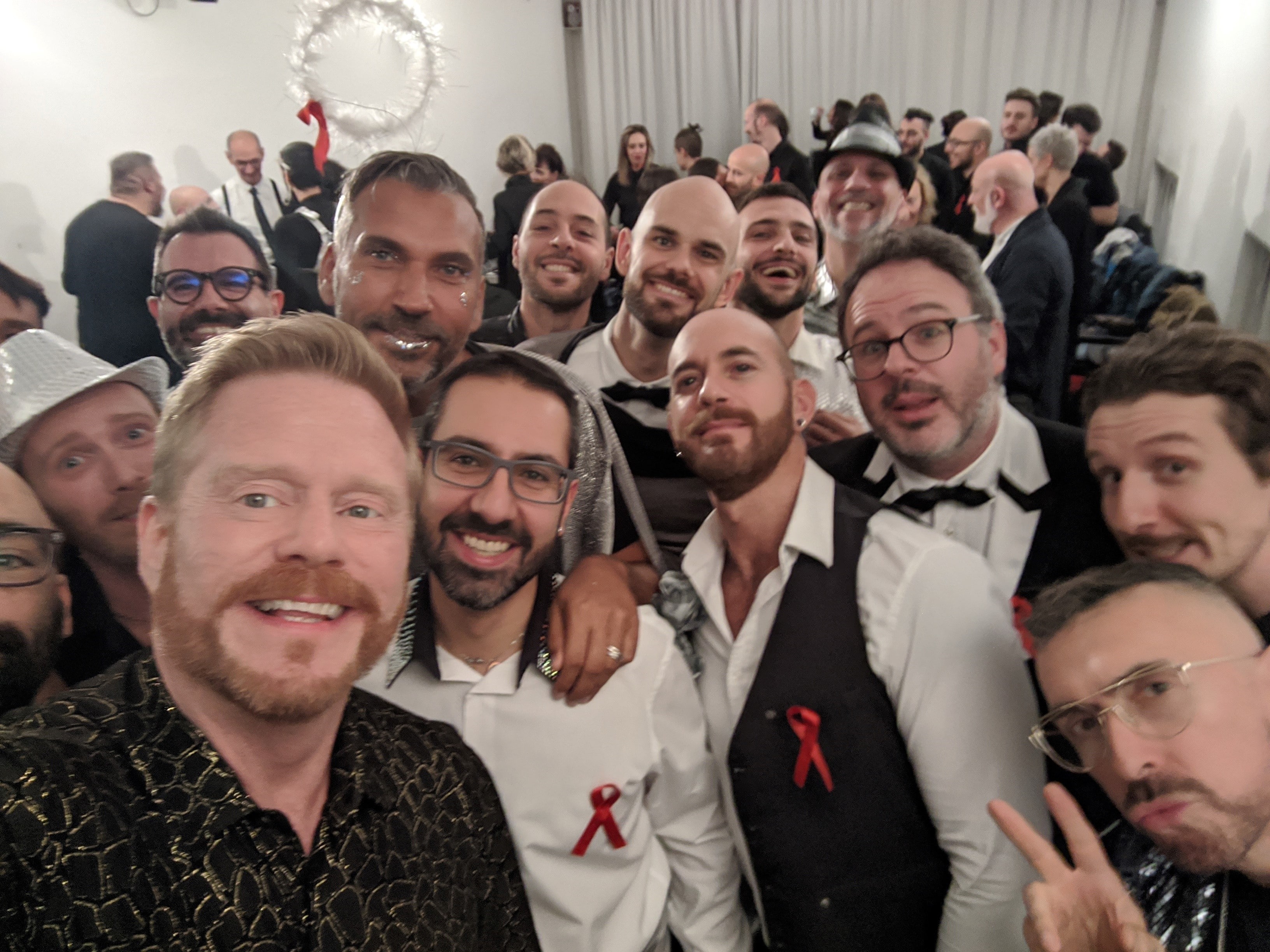 Backstage with the fashion-forward men of KOMOS. Gay affections need no translation.

My second segment focused on “the present,” during which I explained the profound advancements of U=U and PrEP – and the crushing HIV social stigma that nevertheless permeates LGBTQ culture. The audience was especially receptive to my call for them to stand with us as people living with HIV and call out HIV stigma in their social circles and online. 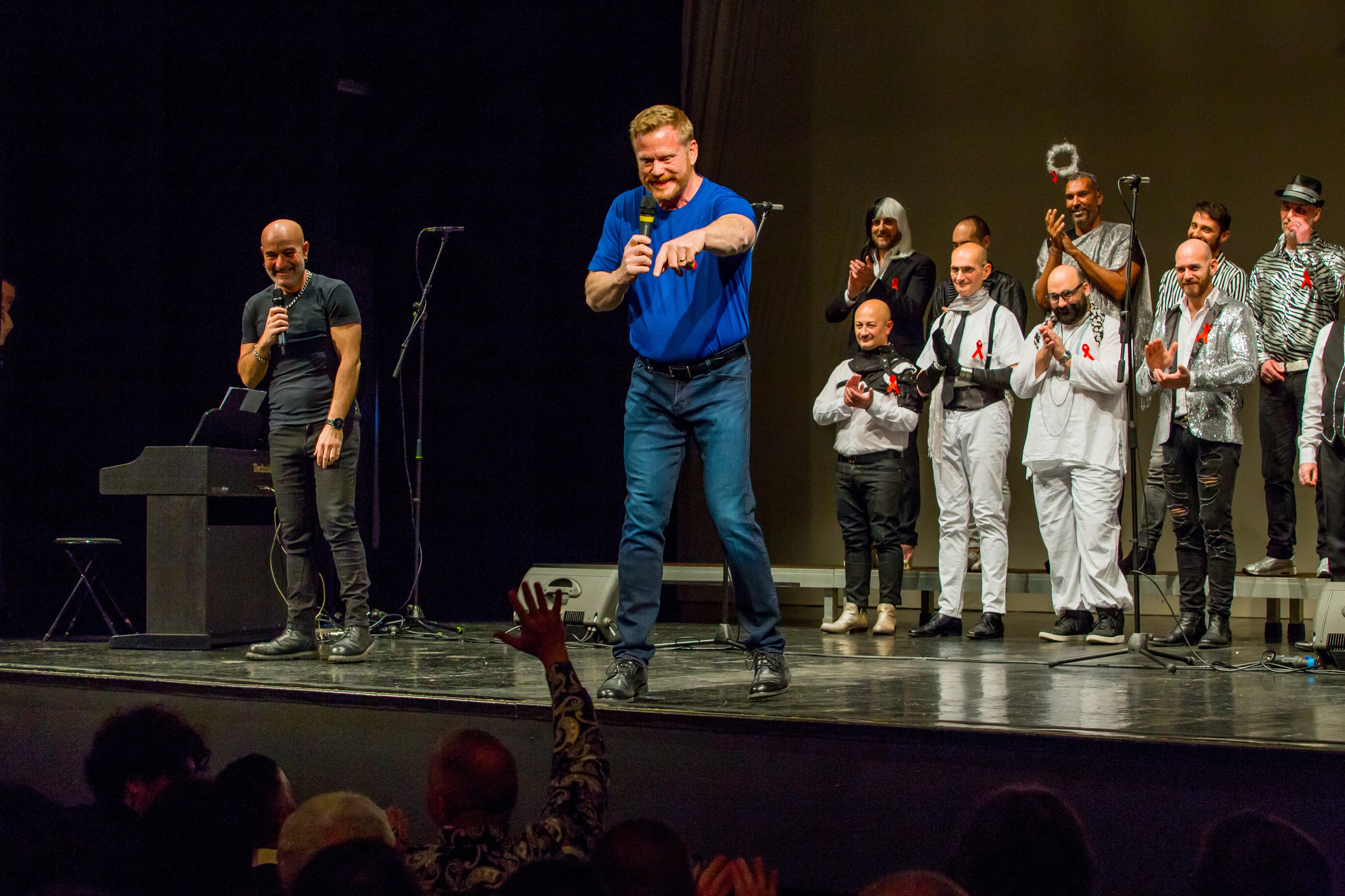 During “the present,” I took the opportunity to recognize my husband Michael. “When I realized I was going to live another thirty years,” I said, “I decided I wanted a sexy man to share it with.” I found him. 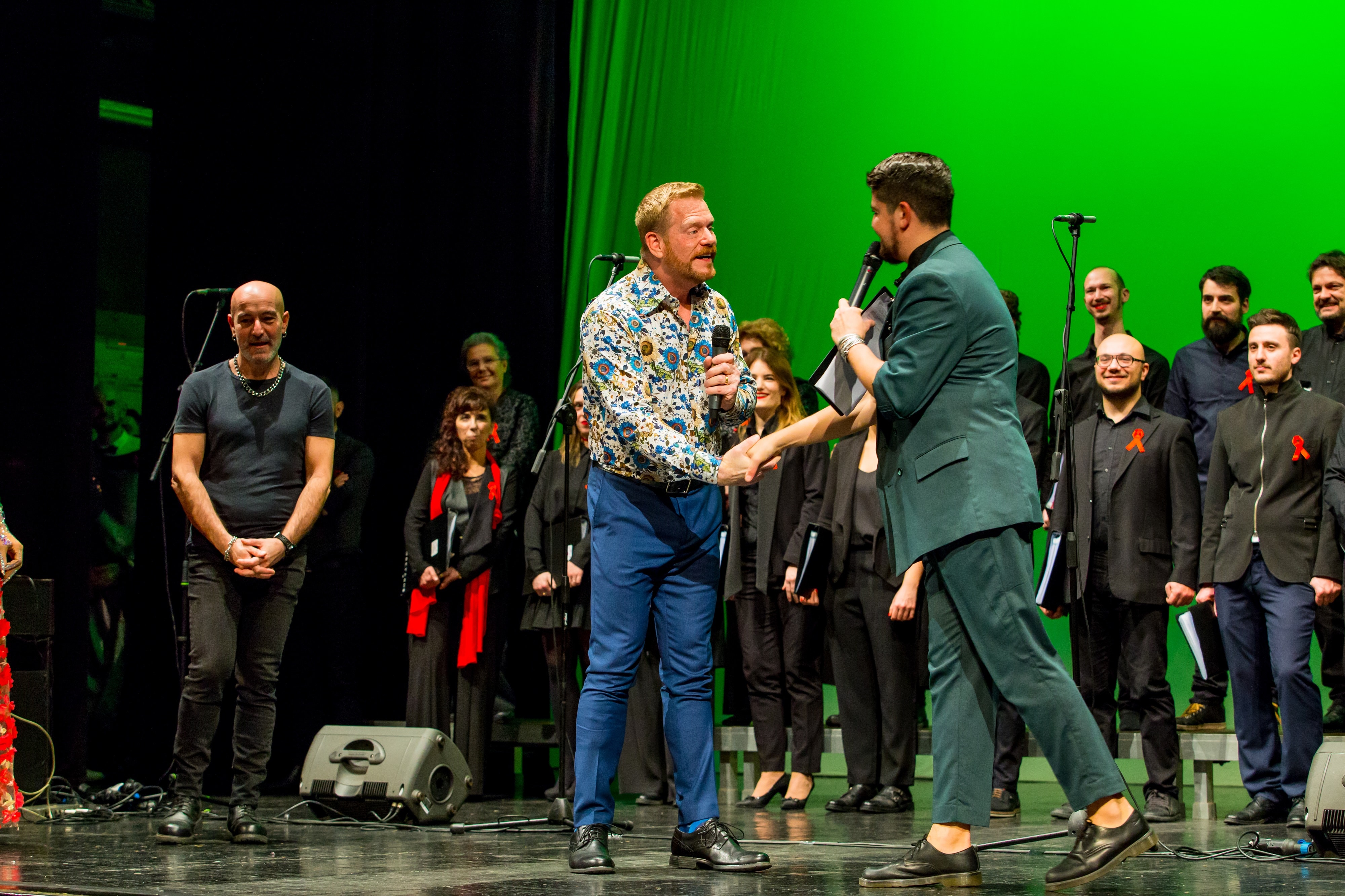 Yes, I made three wardrobe changes for my three segments. I had more costuming than the drag queens. Here, one of the MCs, local personality Matteo Miglio, enjoyed knowing I didn’t speak a word of Italian. Each time I took the stage he introduced himself as a different Italian sex symbol. I smiled and nodded as the audience cracked up.

My final segment on “the future’ tried putting the AIDS crisis, and the tragedies that befall us, into some kind of perspective. If I can’t turn my tragic past into a tool to help other people, I asked, what the hell was the point of going through it? 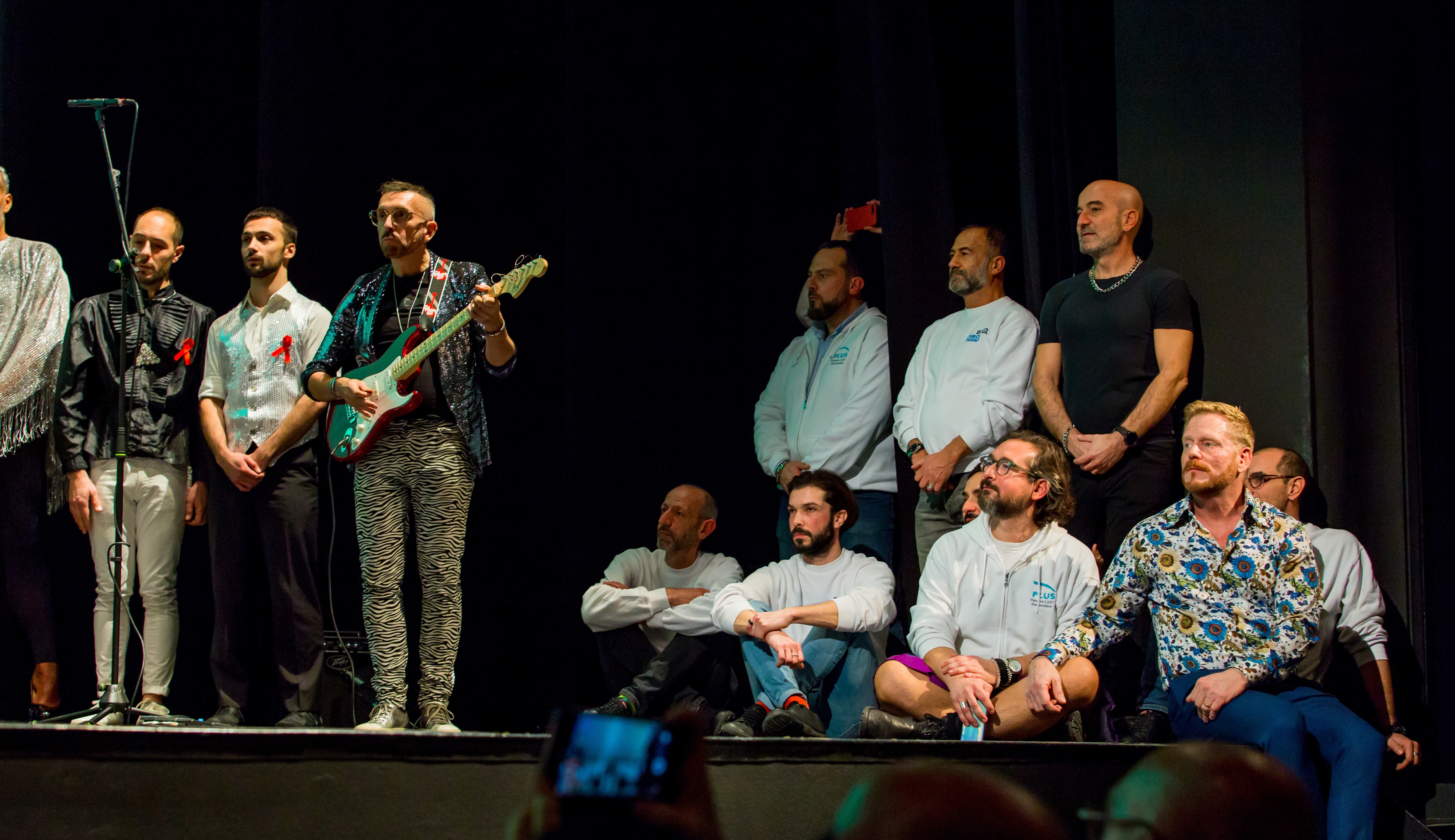 The final performance of the evening brought everyone onstage for a haunting rendition of “Life on Mars.” Sitting beside me is another PLUS Onlus volunteer and event coordinator, Pietro Tomasi. 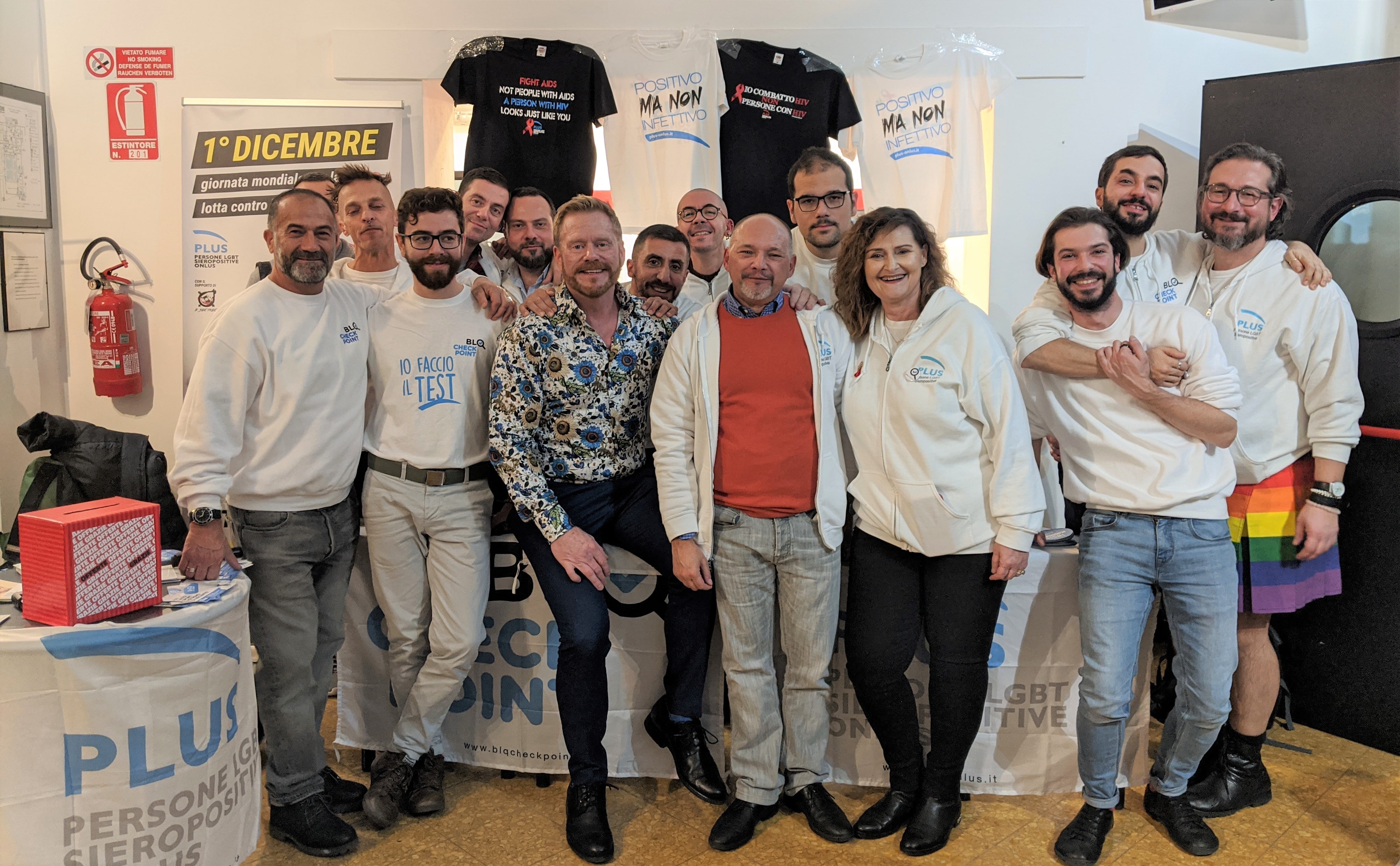 With the dedicated, very affectionate volunteers of my host organization, PLUS Onlus.

Please check out the YouTube channel for KOMOS, where more videos, including their musical performances from the event, will be posted in the days ahead.

My deepest thanks to PLUS Onlus, and my new friend and host Giulio, for making this trip so memorable!