The Wonderful, Stigma-Bashing ‘Wizards of Poz’

Previous Next
The Wonderful, Stigma-Bashing ‘Wizards of Poz’

Any campaign that blends living with HIV with a sense of empowerment and joy always grabs my attention. Stigma remains one of the most damaging forces in our struggle to both combat new infections and support those of us with the virus.

Australian Nic Holas 33, co-created the social and advocacy platform for people living with HIV, The Institute of Many (TIM) only weeks after he tested HIV positive in 2012, and it nurtures exactly the kind of peer support that so many advocates find the most effective. 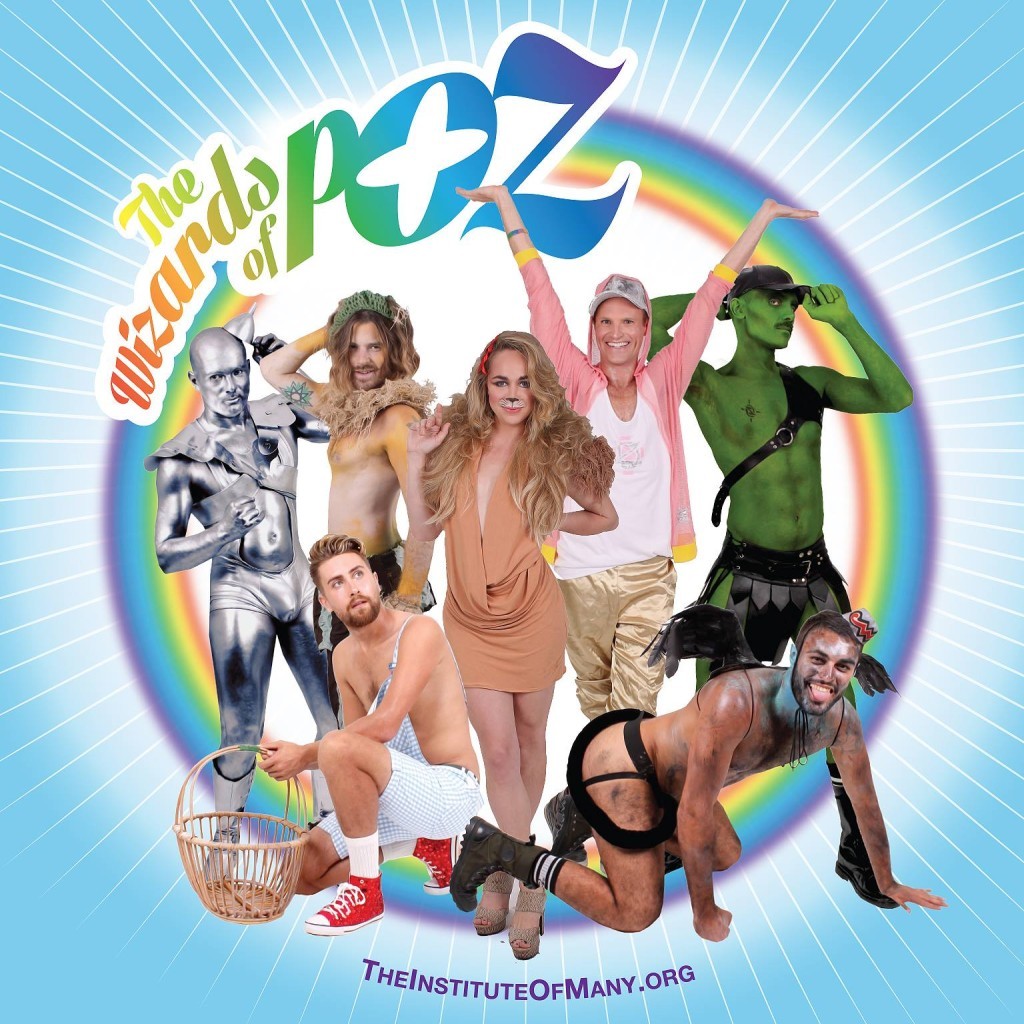 And now, TIM has launched The Wizards of Poz, a social media campaign that celebrates people living with HIV who are taking charge of their lives.

Nic and I spoke about his Wizards of Poz campaign, the Aussie epidemic, “glamorizing” HIV, and a certain sexy monkey.

So, Nic, you’ve taken one of the most iconic films loved by the gays… and made it gayer. That’s no small feat.

Thanks! It was so much fun. The campaign all started from a joke that Jeff Lange (TIM’s American-based co-founder) and I had – namely that I was the Wicked Witch of TIM who stirred trouble, and he was the Good Witch who would just float down every once in a while, smile and leave! When we started to dream up what the campaign looked like, we wanted to extend that image to other members of TIM, and honor their contribution – as well as send a new message to the wider HIV community. 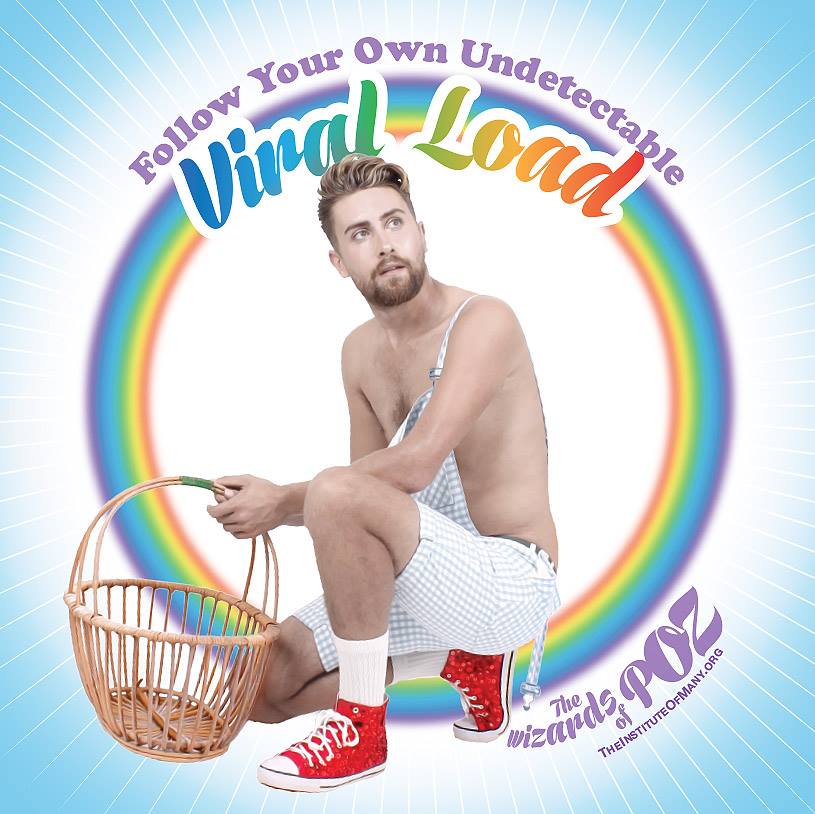 TIM: Our Dorothy is a wide-eyed hipster dream in gingham cut offs, just starting his journey to “follow the undetectable viral load.”

I also like the playful way in which you take subcultures such as queers, radical fairies, sissies, and leather queens and make them something to be exalted and enjoyed.

Those subcultures exist, and they’re all valid! With this campaign, we’re trying to celebrate all the diverse ways queer culture presents itself, in a way as a reaction to the pressure for us to “be normal” at the moment.

I love that a woman is the lioness.

It was so important to me that Abby Landy be our lioness. Positive women are very underrepresented in Australian media depictions of poz living, or when they are, it’s often a betrayal/victim narrative. Abby has been very brave to step into the spotlight to tell her story, and I thought turning her into the anything-but-cowardly lioness was a fitting tribute. 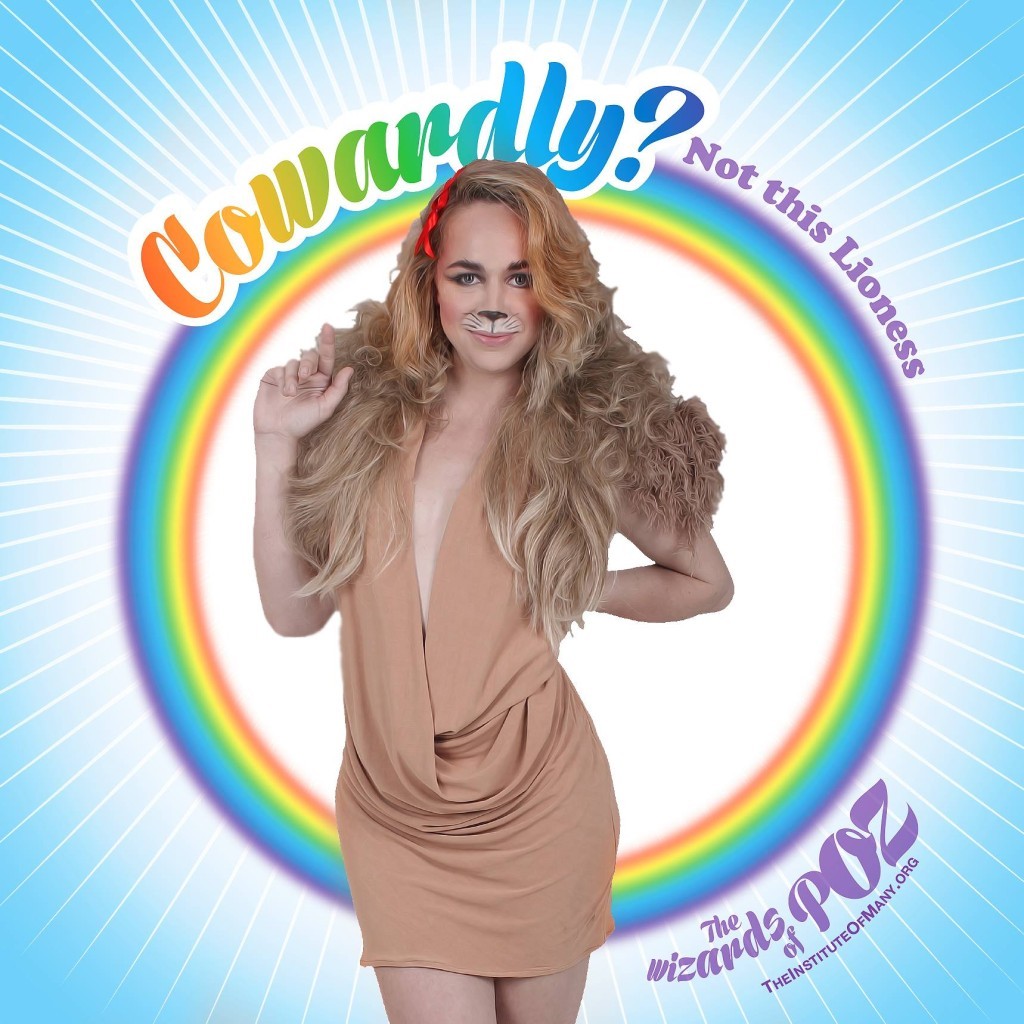 TIM: Our Lioness is today’s young poz woman and is anything but cowardly, and in control of her sexuality and her choices.

How are racial demographics different down under? Here in the United States, including people of color in campaigns like this is important.

This is something that was a bit of a struggle. I could see when I was amassing our “cast” that it lacked diversity. I wanted to pay tribute to the TIM members who had put themselves out there in the media for TIM, but what that has helped me realize is what sort of narrative the media is looking for in Australia, or rather which narratives are being excluded. We have a burgeoning population of Sub-Saharan African migrants and refugees in Australia, plus Asian international students and migrants, and of course our Aboriginal and Torres Strait Islander First Australians. Those communities and their experiences with HIV need to be honored.

I laughed but wasn’t a bit surprised to see Theodore, my hottie Aussie cameraman from my video reports at AIDS2014 in Melbourne, half naked and on his hands and knees! Thank you for completing the Theo fantasy shared by most everyone who meets him.

Ha! It’s an honor and a privilege to find ways to bring Theo’s bare ass to the world. 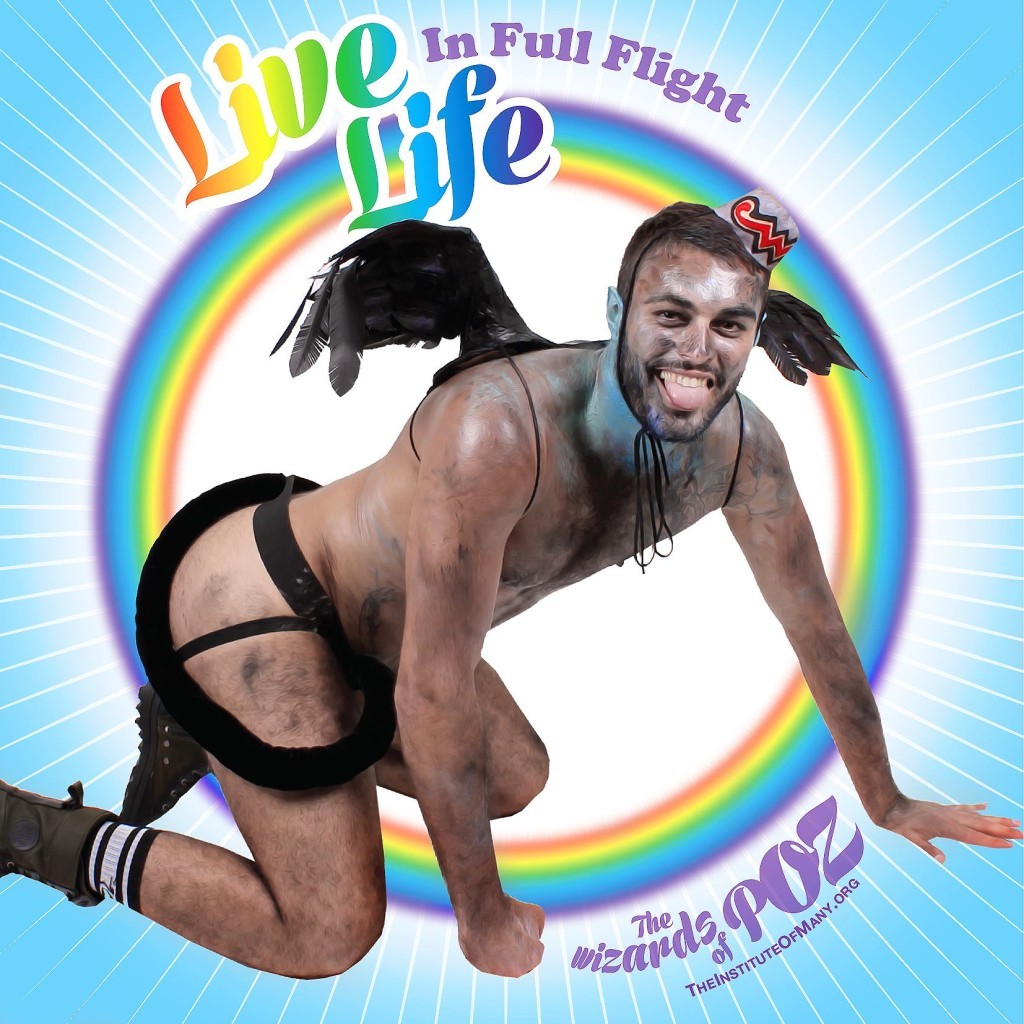 TIM: The Flying Monkey won’t let HIV stop him soaring high in the sky, no matter who tries to clip his wings.

In the materials for the campaign, you speak about “paying rent on our privilege to be HIV+ in Australia in 2015.” I like the throwback to those who came earlier, and the sense of gratitude for our lives today. Tell me more about that.

“Paying rent on our privilege” is one of TIM’s core beliefs. The movement started because Jeff (the Good Witch) and I weren’t that knocked about by our diagnoses. For me, that meant that I owed it to the ones who fought and worked to give us that freedom, and to those diagnosed alongside us who still consider HIV to be a life-limiting event (not to mention of course the millions of PLHIV around the world who cannot access treatment, who are criminalized, and discriminated).

And oh my dear, you have to paint me a picture of what the photo shoot was like. I imagine strange colors and fur and feathers and exposed skin all over the place. And a lot of laughs.

Oh God, the shoot was ridiculous! I’ve done my fair share of wild shoots in the past, and I knew how long things take and how mad it can get. This is the first time though I’ve had to art direct something while being painted Wicked Witch green! The incredible thing was that practically everyone on the shoot was HIV+, and if they weren’t poz they were dating someone that was and got roped in to help! It’s a testament to the creative power and community spirit of the poz universe. 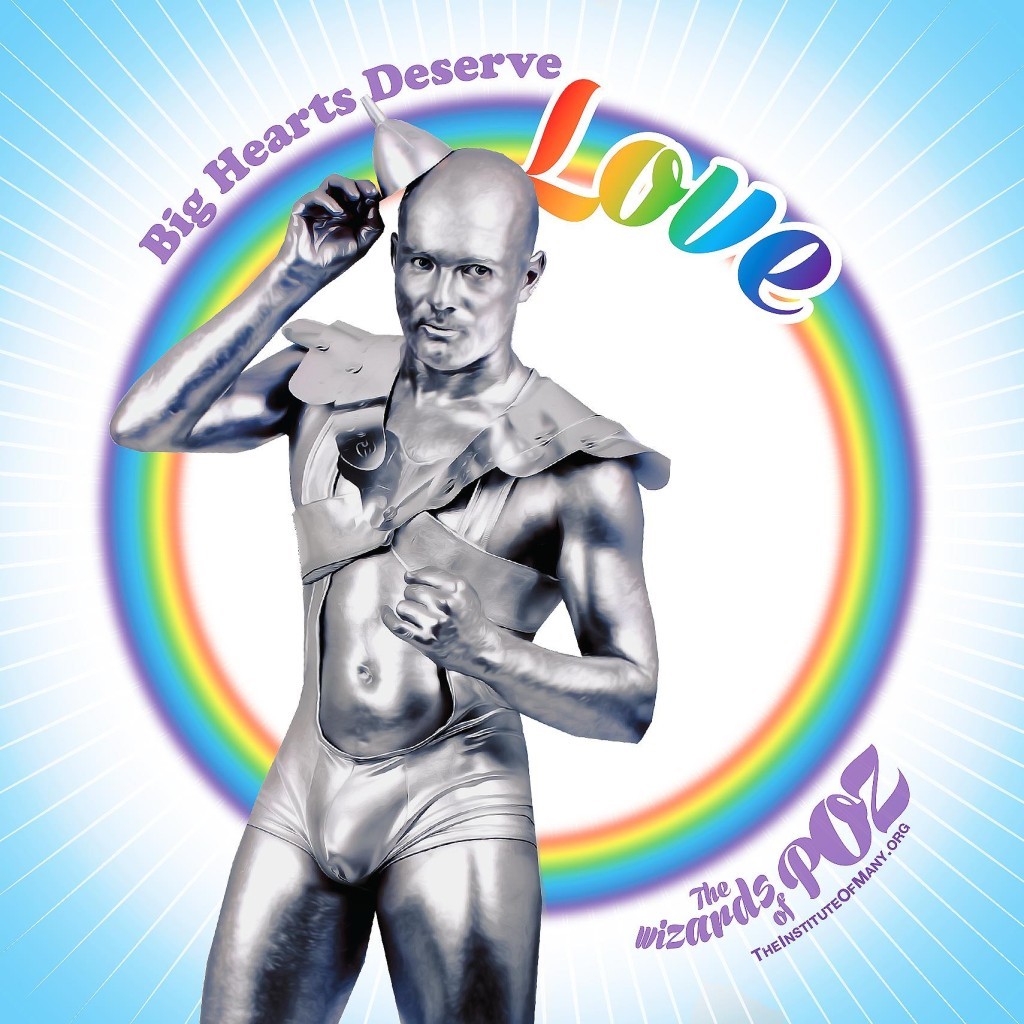 TIM: Tin Man is a flashback to the heydays of 90s raver queer culture, and knows his big heart can find love on the dance floor, online, or anywhere – and his status won’t stop him.

Have you had any negative reactions to the campaign?

Some people have criticized the campaign saying it glamorizes HIV.

It’s ridiculous. The campaign glamourizes HIV+ people. And why shouldn’t we feel glamorous and fuckable and hot? If you can’t tell the difference between making poz people feel good about themselves and making HIV seem “attractive,” then you can’t see us beyond our status. And that makes you a pozphobic fool. 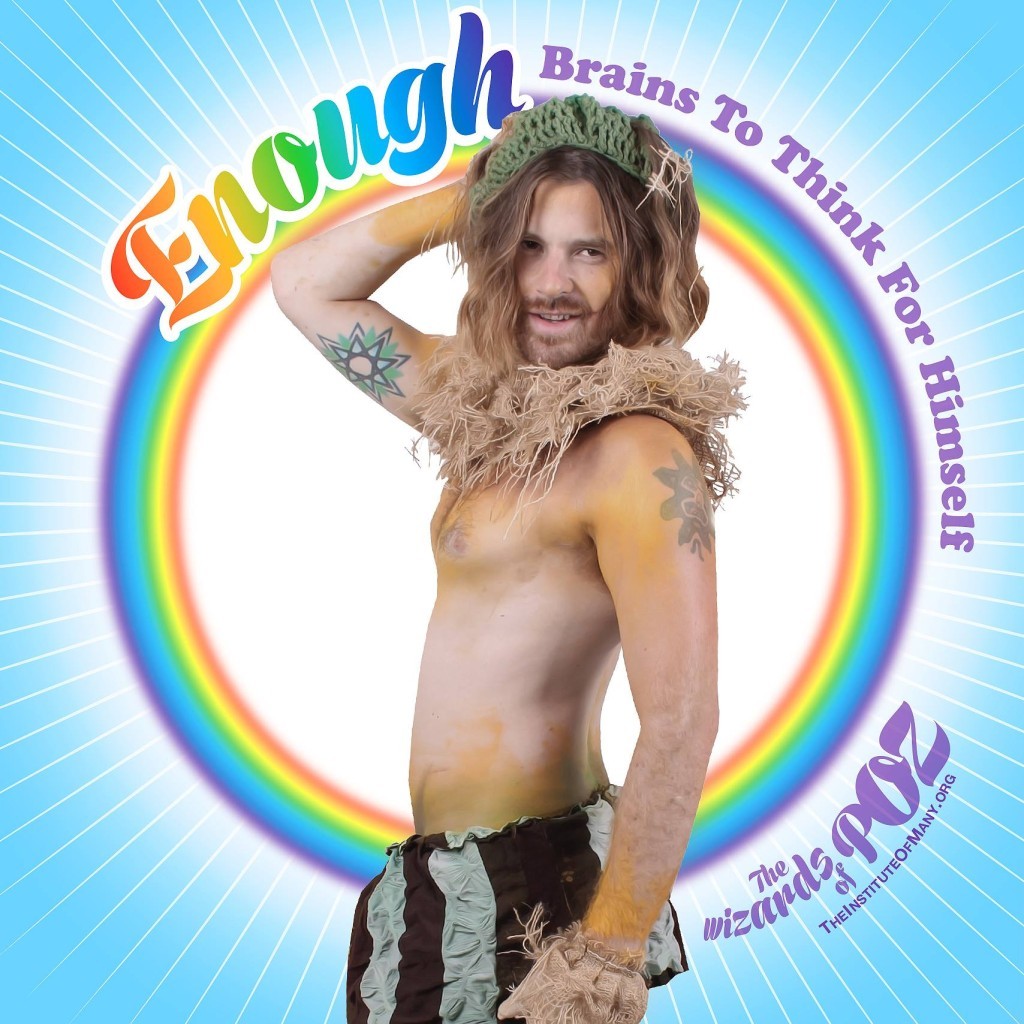 TIM: Scarecrow is a 100% organic radical faerie who turns toxicity into spirituality, and who knows HIV requires philosophy – and he’s got the brain for it.

What is the state of the HIV epidemic in Australia, by the way?

There are approximately 26,000 people diagnosed with HIV here. One of the leading responses has been needle exchange programs and sex worker empowerment, which means gay men are the main affected population (not the only one, of course).  There are virtually no AIDS deaths any more due to treatment uptake in the 90% because of universal healthcare. So, we have the luxury of focusing on stigma.

As progressive as Australia is, many people will be surprised to learn that pre-exposure prophylaxis (PrEP) isn’t available there.

PrEP isn’t an inevitability here. Truvada still needs to be approved for use as PrEP, then put on something called the PBS (Pharmaceutical Benefits Scheme) so anyone can access it. It is still two years away, at least. 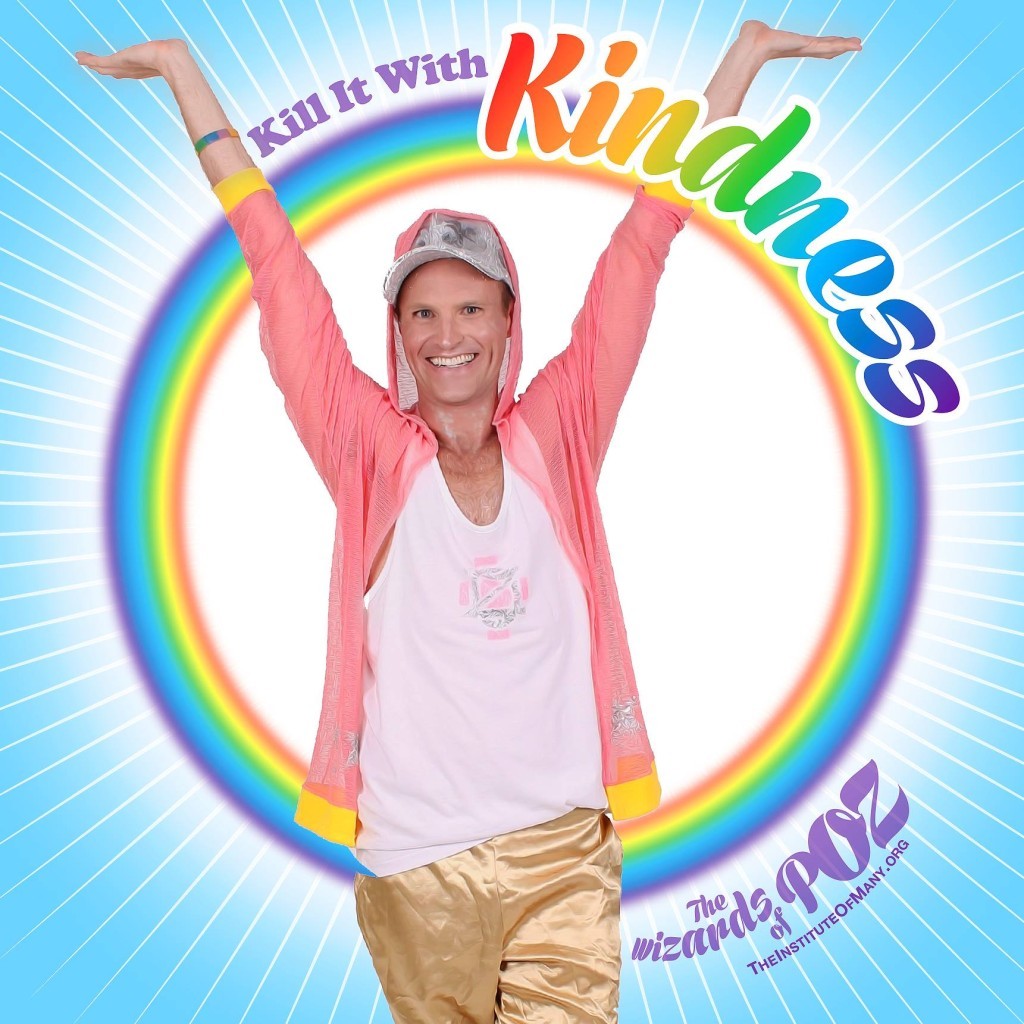 TIM: The Good Witch is a sissy swagger jock. Along with the Wicked Witch, these witches are two sides of the same coin doing what needs to be done to keep The Land of Poz moving forward, in their own unique way – naughty or nice.

Is TIM limited to those in Australia?  There may be people elsewhere who see this campaign and want to join in the online social support you offer.

The TIM group is global! It’s all back to the “paying rent on our privilege” thing. The TIM digital space (a private group on Facebook) not only lets people find community, it can put our HIV into perspective. As I’ve had to say in the past, “TIM wasn’t set up to help you, it was set up so we could help each other.”

That’s great. If the FB group is private, how might people who read this story join the group if they are interested? 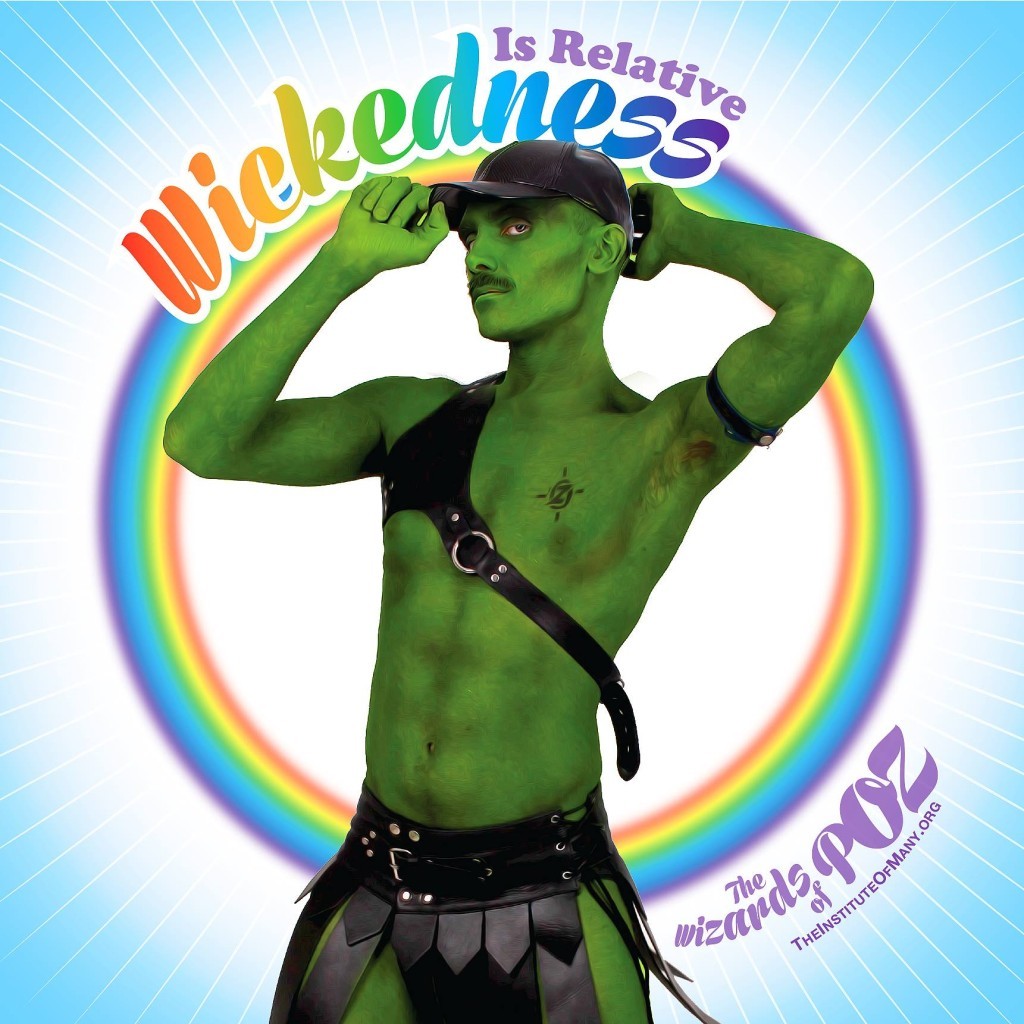 TIM: The Wicked Witch is a a dirty leather queen. Along with the Good Witch, these witches are two sides of the same coin doing what needs to be done to keep The Land of Poz moving forward, in their own unique way – naughty or nice.

Thanks for this work, Nic.

(Campaign models are all members of The Institute of Many, and include Sebastian Robinson as Scarecrow, Dean Camilleri as Tin Man, Charlie Tredway as Dorothy, Jeff Lange as Glinda, Theodore Tsipiras as Winged Monkey, Abby Landy as the Lioness, and Nic Holas the the Wicked Witch.)