Will HIV Ever Be Safe Enough for You?

Previous Next
Will HIV Ever Be Safe Enough for You?

There is a classic episode of Oprah from 1987 that can still raise my blood pressure. That year, the tiny town of Williamson, West Virginia, became part of a national discussion about AIDS when Mike Sisco, who had returned to his home town to die of the disease, dared to step into a public pool. 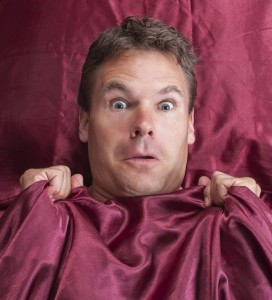 The community freakout was immediate. Sisco was quickly labeled a psychopath (rumors emerged accusing him of spitting into food at the grocery store), and the town pool was closed the next day to begin a Silkwood-style pressurized cleaning.

Soon thereafter, Oprah Winfrey arrived with cameras for a town hall forum about the incident.  Fear was the order of the day. “If there’s just one chance in a million that somebody could catch that virus from a swimming pool,” the town’s mayor told Winfrey’s worldwide audience, “I think I did the right thing.”

Sure. Why not react in the most extreme way possible, if there is a chance in a million?

Williamson citizens were not swayed by health officials who calmly explained the established routes of HIV transmission and the impossibility of infection from a pool. “The doctors can say you can’t get it this way,” a woman countered, “but what if they come back someday and say, ‘We were wrong?'”

Indeed. What if? If there’s a chance in a million…?

That broadcast might have remained a sad footnote in HIV/AIDS history, an instructive example of people ignoring scientific fact to protect a satisfying fear, if history didn’t enjoy repeating itself so much. Today, though, the willful ignorance isn’t coming from uneducated residents of a southern town you can barely find on a map.

It’s coming from gay men. And they are just as threatened, frightened, and dismissive of science as the townsfolk of Williamson were thirty years ago.

Recently, research known as The PARTNER Study was presented at the prestigious Conference on Retroviruses and Opportunistic Infections (CROI). PARTNER proved something HIV advocates have long suspected: people with HIV with an undetectable viral load are not transmitting the virus to their partners. The study included nearly 800 couples, all involved in an HIV positive/negative relationship, gay and straight, with the positive partner maintaining an undetectable viral load. Over the course of two years, more than 30,000 sex acts were reported and documented (couples were chosen based on their tendency to have sex without condoms).

Not a single HIV transmission occurred during the study from someone with an undetectable viral load. If PARTNER had been researching a new medication, they would have stopped the trial and dispensed the drug immediately.

[UPDATE: The latest PARTNER study results were released on July 12, 2016, and showed no infections from the positive to the negative partner. The study, at that point, had chronicled more than 58,000 “penetrative acts” without condoms.]

The PARTNER results bolster the prevention strategy known as “Treatment as Prevention” (TasP), meaning, a positive person on successful treatment prevents new infections. To date, there is not a single confirmed report of someone with an undetectable viral load infecting someone else, in studies or in real life.

Just don’t tell that to a sizable contingent of skeptical gay men, many of whom took to their keyboards to dismiss the PARTNER findings. Phrases like “false sense of security,” “positive guys lie,” “junk science,” and “if there’s even a small risk” appeared on Facebook postings and in web site comment sections. The people of Williamson must be slowly nodding their heads.

Resistance to the PARTNER study corresponds with stubborn doubts about PrEP (pre-exposure prophylaxis, or HIV negative people taking the drug Truvada to prevent infection). Although virtually every nervous argument against PrEP has been overruled by the facts, naysayers continue to either reject the evidence outright or make moral judgments about the sex lives of HIV negative gay men on PrEP.

Yes, there are unknowns. There always are when scientific studies meet the real world. And every strategy will not work for every person. But the vehement rejection of such profound breakthroughs suggests there is something more, something deeper, going on in the minds of gay men. What is it?

Our collective memories of AIDS horror are hard to shake, and that’s a good place to start. On a gut level, any study suggesting that HIV could be neutralized is met with a weary doubt. Good news is no match for the enduring grief that has shadowed us for 30 years.

The PARTNER study also threatens the view that positive men are nothing more than risks that must be managed. The study kills the HIV positive boogeyman. It means positive gay men who know their status might actually care enough about their health to seek out care, get on treatment, and become undetectable. And, once the positive partner is no longer a particular danger, both partners would bear responsibility for their actions. What an enormous psychic change that would require in our community.

It’s tough to do that when fear creeps in and “what if?” fantasy scenarios take hold. What if my partner missed a dose yesterday and, even though HIV meds stay in the bloodstream for extended periods, his viral load has inexplicably shot up? What if he isn’t being truthful about his viral load? What if he doesn’t know?

I have some “what if?” questions of my own. What if these unrealistic fears were meant to stigmatize and isolate HIV positive people? What if I am undetectable and feel no responsibility to discuss my status with a sex partner because I don’t care to engage in a science lesson? What if everyone availed themselves to prevention options that worked best for them? What if my HIV status were none of your damn business?

These risks could be alleviated, of course, if everyone simply protected their own bodies when having sex with people they don’t know or trust. But that would place an equal burden on negative men, and what a bother that is.  Better to leave that discomfort to those with HIV, vectors of disease that we are. Just consider us criminals, lying to you about our viral loads and spitting in the food in Williamson, just waiting to infect you when we get the chance.

As long as we’re giving undue attention to fantasy scenarios we’re not focused on the real threats. The rates of STD’s are up. Young gay black men in the United States don’t have proper access to healthcare and have infection rates worse than any developed country. Our community is plagued by  alcoholism, addiction, and mental illness. Do we want to debate established science or should we devote that energy to other challenges to gay men’s health?

If you still have the arrogance to believe you could win the HIV Powerball Lottery and be the one person who gets infected in ways science has disproven, you’re perfectly entitled to that point of view.

Here are some helpful instructions, however. Carefully step away from your computer and don’t touch the cords because 50 people die of product related electrocutions each year. Walk slowly to your bedroom, being mindful of debris in your path because slip-and-falls kill 55 people every single day. Once there, refuse food or water because, well, you never know. Now slip into your bed of willful ignorance and try to make yourself comfortable.

The good people of Williamson are keeping a spot warm just for you.

p.s. In the time it took you to read this article, the number of people who were infected by someone with HIV who had no viral load was zero.