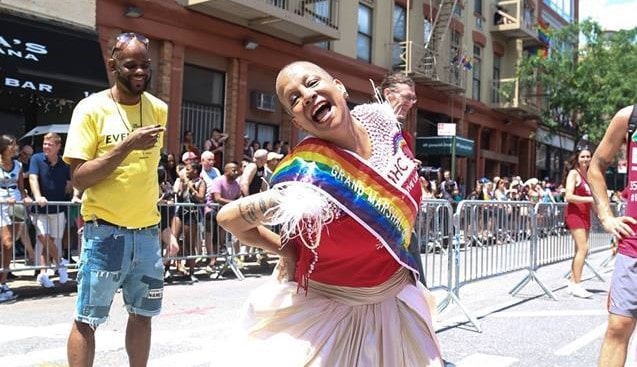 Krishna Stone, one of the many women profiled in the book, Fag Hags, Divas and Moms: The Legacy of Straight Women in the AIDS Community.

My first job in AIDS in the 1980s was at the Los Angeles Shanti Foundation, an organization that provided companions for the dying. When our founding director, Daniel P. Warner, retired from the organization, the final candidates for his job met with the full staff for final interviews.

One of those job candidates, Sue Crumpton, had the audacity to be a straight woman. Trying to replace our gay founder. At an AIDS agency. In 1991.

Sue’s credentials as a skilled administrator with a background working on behalf of battered women didn’t resonate with some of us. For gay men like me, our questions reduced the job at hand to a stereotype.

“Are you comfortable working around gay men?” We asked. She said she was.

“Really?” We pressed her. “Because there’s a lot of explicit sexuality, because this is HIV, of course. Are you sure you would feel comfortable working here?”

“Yes,” she answered again, and then added, “but you make me wonder if I would be comfortable working with you…”

Sue Crumpton not only got the job, she led LA Shanti into a period of growth, program expansion, and heightened visibility. And her roots in feminism taught me lessons I have never forgotten.

HIV/AIDS history itself has been similarly skeptical about the contributions of straight women.

Thankfully, HIV activist and author Victoria Noe helps to set the record straight with her new book, Fag Hags, Divas and Moms: The Legacy of Straight Women in the AIDS Community. Viki and I had a conversation about her book and the erasure of women in the narrative of AIDS. 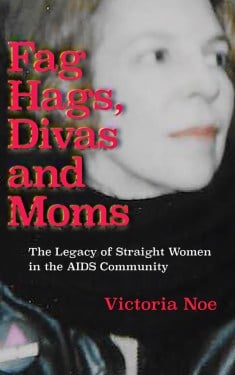 Mark S King: Thanks for speaking to me, Viki. You know, when I think of women in the AIDS arena, I think of all those lesbian nurses first. Why are you focusing on straight women?

It’s a graphic novel written by a lesbian nurse, about her experiences with AIDS patients. I loved it. Its another piece of the story that hasn’t been told.

That outsider status you mention comes up a lot in the book. You are not happy with the way straight women have been left out of the narrative.

Even now, to a lesser extent, that’s still true. I’ve understood the ownership of the epidemic by the gay community. But that doesn’t mean straight women weren’t effective.

You don’t pull any punches in terms of stating your displeasure with gay men owning the history as well as the services and the sympathies of the public.

I don’t discount that at all. The gay community was and continues to be disproportionally affected. But that doesn’t mean there aren’t other parts of the story. I’ve heard that straight women’s stories were not as important. When AmFAR wanted to expand research to hetero transmission, for instance, the fear was that gay men would be left in the lurch in favor of heterosexual research.

Isn’t it a shame that it always comes down to a contest of sorts, hemophiliacs vs gays vs women…

That’s why I included several women in the book who were told not to get tested. They found out they were positive because they insisted on the test. That kind of experience has been way too common. “If you’re not hemophiliac or gay or inject drugs, you’re not at risk.” I’ve always felt everybody was at risk. Women were trying to take care of their health and were running into roadblocks from their own doctors because they didn’t fit a definition of who might test positive. 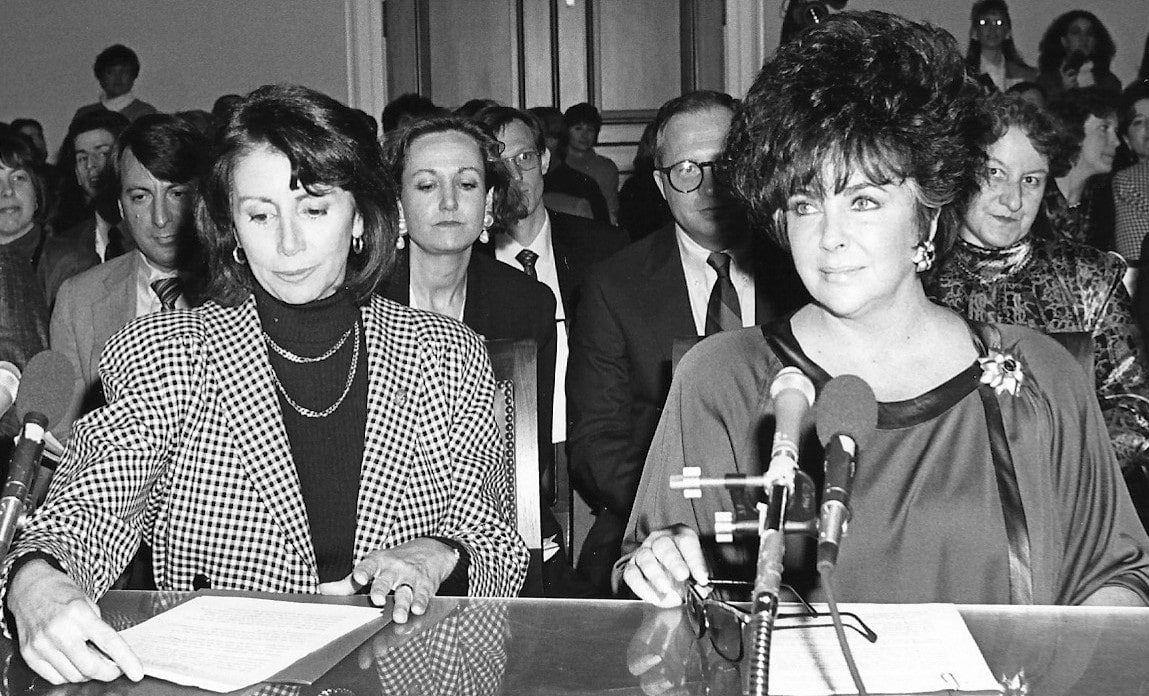 Nancy Pelosi with Elizabeth Taylor, during congressional testimony about HIV/AIDS.

You kind of dared yourself to write this.

Yeah. I guess I did. When I went to a panel discussion on this topic at the New York Public Library, I assumed women’s stories had been gathered somewhere, and they hadn’t. Even women’s history books ignored the epidemic. Women’s health is about reproductive health but never HIV. If you can’t find a book you want to read, you should write it yourself, they say.

So many of the women you write about are fueled by grief.

Absolutely. Like the quilt or ACT UP or volunteering, the initial impetus was almost always grief. We’re still dealing with that today.

That is fairly universal, isn’t it, in terms of what brought people into the movement.

I wrote a series of books about grief, including friends who were lost to AIDS, and another about friends lost who were in the military. Survivor guilt is so common in both groups. The issues of long-term survivors are very important to me.

Why do long-term survivors strike a chord with you?

I see a lot of survivor guilt among my friends who are long-term survivors. I see the isolation, and the need for groups, in the way we have veterans groups to support them. There’s a lot we can do as a community to support them, and make them secure in the knowledge that we have not forgotten about them.

You included my mom in your book!

My heart stopped when I read the quote from her, which opens the chapter on Moms. It’s something she said in my video interview of her, “What It Feels Like for a Mom.”

It was perfect. It was a perfect expression of what it is to be a mom, speaking as a mom.

I then went straight to the bibliography just to see her name again. She was a librarian so she would have done the same thing, immediately.

I love librarians. They were a big help to me.

And all those mothers in your book, taking their sons in. That meant cleaning up the vomit and the shit. I mean, that’s the nitty gritty, isn’t it?

Yeah. But you know, they’ve done it all before. This wasn’t something new

Oh, come on. This was their grown sons they were not supposed to outlive.

They were not. Thank God for the moms who did not turn away their children. You and I know there were far too many of them who did.

I feared that would be my mom’s fate, that she would end up taking care of me. Outliving her was a real triumph for me, if that makes sense.

Absolutely. You spared her that.

There’s a certain vexation you have with institutional memory lapses of the contributions of women. You return to it often in the book. The lack of specific services, the organizations catering so specifically to gay white men. You’re pissed off about that.

There’s a real tension there.

What needs of theirs are being met, that they are more vocal about?

Taking ownership of their health care. Women are more assertive, and less likely to accept less attention. Women who are working in the HIV community have become louder, they are making their presence known. They are no longer willing to be quiet when they are the only woman in the room at a meeting. Because that still happens.

I can also see Black men and women nodding their heads at everything you just said.

Yeah. We’re seeing more and more women of color taking leadership roles and being very public and vocal. There’s no downside to that.

Speaking of diverse women, I often refer to Positive Women’s Network as the most ferocious HIV advocacy group on the planet right now. Do you agree?

What makes them that way?

The same thing that made gay men that way in the beginning. The urgency. The need. If they don’t do it, no one is going to do it for them.

Did many of the stories you uncovered in your research surprise you?

A couple of them surprised me because they shattered stereotypes that I had. The involvement of the Junior Leagues, for instance. I was a member a long time ago, but I did not know they became involved in HIV in 1986, and they are still doing HIV services today.

What were your actual interviews like with the women in the book?

Most of the women I talked to cried during the interview. All of them apologized at first, but by the end of the interview they weren’t apologizing for crying.

Because they were finally able to tell these stories, and someone was listening to them who thought they were important.

Are you changing the narrative, then?

I’m correcting it. I’m filling in the gaps that people didn’t know existed. Part of my research included reading a book about the history of women in the second half of the 20th century.

I am going to bet that you were not impressed with their historical perspective.

I immediately went to the index of the book, and AIDS was listed on only one page. That page had one paragraph about women in the epidemic, about the fight to have the definition of “AIDS” changed so women could get proper treatment and diagnosis. They didn’t mention ACT UP or anything. Very vague. It pissed me off.

Well, you getting pissed off seems to have benefits, like this great book. Thanks, Viki.