ACT UP Had a Diversity Problem. Should ‘Pose’ Correct it?

Previous Next
ACT UP Had a Diversity Problem. Should ‘Pose’ Correct it? 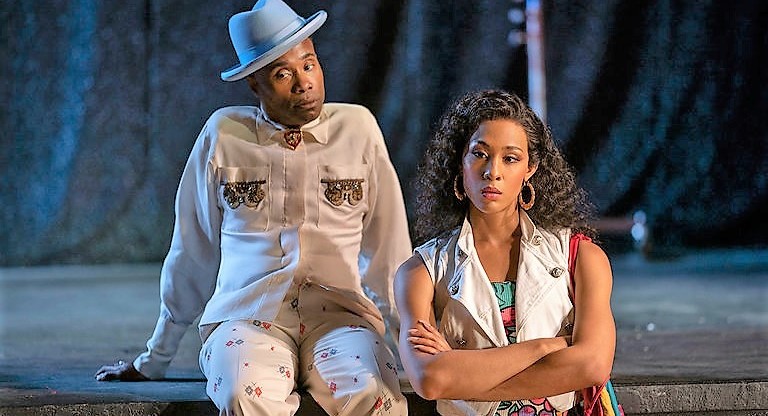 To say that Pose is an unlikely hit is an understatement. It’s a goddamn miracle, and while we’re at it, Pose is also a gift to LGBTQ history, to the visibility of marginalized people, and to HIV awareness in the here and now.

It challenged me, then, when the most recent episode, “Blow” (7/30/2019), left me feeling unsure about the show’s creative choices and how it playfully reimagines an iconic, real-life moment in AIDS activism – and not for the first time. Processing the episode led to some very real revelations about the history of AIDS activism and its complicated relationship with race and gender.

The set-up: Blanca and Pray assign their young family the AIDS activism task of covering the home of Frederica, Blanca’s bigoted landlord, with an enormous condom. “Killing two birds with one stone,” says Blanca, because she wants to embarrass Frederica as much as send a message about the need for condom use during the most murderous years of AIDS.

The giant condom plan is based on a real 1991 event, when ACT UP member Peter Staley orchestrated the installation of an enormous condom-type cover on the home of notorious homophobe, bigot, and HIV prevention enemy, U.S. Senator Jesse Helms.

This intersection of fact and fiction harkens back to the Pose season opener, when the racially diverse cast is inserted into the famous ACT UP “Stop the Church!” protest. News footage of the real-life action would suggest the activists on the scene were primarily white.

Meanwhile, Peter Staley and his gang of co-conspirators (the “Tag Helms Seven”) who covered the home of Senator Helms consisted on six white gay men and a white woman. The activists in the Pose recreation consisted of black and brown men and trans women. Which of these things is not like the other?

Let me tread lightly here. It was delightful to see Pose reimagine the actions of ACT UP with their cast of black and brown faces and diverse gender expression. But it has been suggested the episode discredits history, or the contributions of white gay men. Is Pose guilty of “activism appropriation?”

“ACT UP was 80% white gay men,” says activist Peter Staley, the man behind the Jesse Helms condom action in 1991. “Most of the lesbians were white, too. There is a definite problem with ACT UP’s history in terms of the participation of women and people of color.” Staley believes the diversity problems of ACT UP often get ignored.

Indeed, the character of Pray Tell recoiled at the very thought of attending an ACT UP meeting in an earlier Pose episode. “Oh, no, no, no, no, no, no,” he laments. “My black ass does not need to join your group of preppy white queens and ill-fitted Gap chinos who have never had to fight for a goddamn thing in their lives.”

“It was a great amazing thing for (Pose writer) Janet Mock to include,” says Staley, “because it did point out that the ballroom community and queer people of color felt uncomfortable coming to our meetings, and it was far less their fault than it was ours. We should look at this. We shouldn’t pretend that ACT UP was a rainbow movement, because it wasn’t.”

“Much has been made about the fact that (trans activist) Marsha P. Johnson attended a few ACT UP meetings and stood in the back, but no one talks about why she didn’t keep coming back, or join one of the various committees. I’m guessing it was because she didn’t see many others like herself in the room.”

How does Staley feel, then, about Pose showing a group of diverse people jumping out of that rented van to put the condom on the house?

“I think what they’re doing is a beautiful thing,” Staley told me. “The ballroom community was not ignoring AIDS. They were activists, too. They have a rich history of activism. The fact that it didn’t intersect enough with the world of ACT UP is an historical shame, and this show is paying homage to the history of ACT UP through their lens. I think it is beautiful and I have no beef with it.”

Pose, then, serves as a kind of corrective, filling in the blank spaces where people of diverse color and gender might have been, should have been, and were. The media adored ACT UP during their heyday, but for reasons of privilege and visibility. These were young white boys who were dying – a greater tragedy, don’t you see? – and the news cameras followed them everywhere. Meanwhile, black men and women and trans folks fought for scraps of visibility. They didn’t get much.

“By the way, the African American members of ACT UP did far more than their representation in our group might suggest,” Staley adds. “By 1990, the majority of the newly infected in New York City were African Americans. An ACT UP committee was formed, the Majority Actions Committee, and that was our African American committee.”

Sean Strub, author and founder of POZ Magazine, stood on the roof of Senator Helms’ house that day in 1991 with Peter Staley, unfurling the giant condom. He supports the creative license Pose has taken.

“Lord knows that black and trans people were involved in ACT UP,” Strub told me, “especially as it became more of a social movement. But the media representations inevitably boil down to a group of cute white ivy league boys of tremendous privilege. That privilege was reflected in a powerful indignation when we learned ugly truths that those who were disenfranchised from power had known all along.”

“Who threw the first brick at Stonewall?” Strub continues. “Who broke the host at ‘Stop the Church?’ Who was on the ladder at Senator Helms’ house? We’ve mythologized the role of those individual actions. For a lot of whites, for that to be someone other than white is threatening. We don’t understand the extent to which those actions were made possible by both privilege and by the army of a more diverse community who laid the groundwork for those actions.”

Peter Staley was an invited guest on the set of Pose the day they filmed the scene recreating a day in his own life. He watched them cover a fictional home with a giant condom, reflecting his factual past. Remembering that day, Staley is reflective and open-minded.

“They were not putting a condom on Jesse Helms’ house,” Staley says, putting to rest any thoughts of appropriation. “They reimagined and paid homage to ACT UP by saying this ballroom community interacting with ours, and in doing so they have elevated and honored our history.”

“This is a community that was incredibly impacted by AIDS,” Staley concludes, “and they were doing a great deal of AIDS activism, even if it wasn’t on ACT UP’s media covered stage. I love the fact that Pose is merging the two, into what should have been, but sadly wasn’t.”

(I would encourage you to read Dan Keith Williams’ posted comment, below, in which he shares his own insight into this issue, including this: “My comments are based on experiencing 35+ year of almost complete invisibility of the work of black and brown people in ACTUP. We weren’t in the movement to be tokens but because we felt we needed to be a part of the process for change. While I’m speaking up, there are a number of us around with a broad range of perspectives that can be explored by anyone who wish to seek us out. It’s just sad, unfortunate and frustrating that little to nothing has changed when I comes to inclusion and we’re constantly having to remind people that our voices matter.) 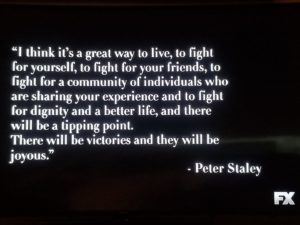 p.s. Peter Staley, who is quoted in the final frame of the Pose episode, is busy writing his memoirs now, but he insisted that I mention another book in the works. “Sarah Schulman has written her first draft of a very consequential book on the history of ACT UP,” Staley told me, “and her book is very intentionally going to act as a corrective, elevating the impact that women and people of color had within ACT UP. I think she would be the perfect historian to take a hard look at our diversity issues.”