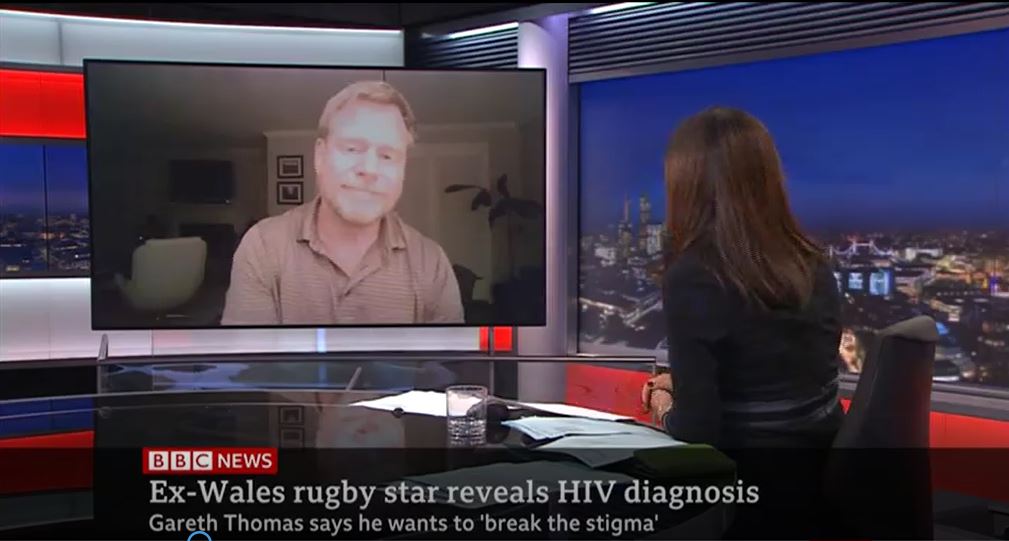 Okay, I will admit I had no idea who Gareth Thomas was, beyond hearing on Saturday that a major rugby star in the United Kingdom had disclosed his HIV status.

But anyone living with HIV could relate to the heart-breaking video he released announcing he is HIV positive. His apprehension is palpable, and he makes it clear that the disclosure does not exactly come voluntarily; tabloids were on the verge of telling the world. Gareth, who came out publicly as gay in 2009, chose to disclose his HIV status on his own terms while he was able, albeit in the international media glare.

When I was contacted by BBC World News producer Freddy Tennyson (is there a more adorable British name?), I had about 20 minutes to educate myself on Gareth’s announcement and then clean and rearrange my living room. I had three lamps sitting on the counter in front of me for lighting, and there wasn’t time to adjust their harsh effects before going live on air. I’m investing in a better camera, folks. Vanity springs eternal.

The interview went well. Sometimes you blank out and the words don’t flow very well. In this case, I managed to share my empathy with Gareth’s painful disclosure – something I know is shared by so many of us living with HIV – and then pivot to the damage of HIV stigma, what it was like testing “then” vs. “now,” and then explain the news that people living with HIV who have an undetectable viral load cannot transmit the virus to their sexual partners (U=U).

Nothing out of my mouth is original, of course. Many of my sound bites are stolen word for word from advocates like Sean Strub (“as our physical lives have improved, social stigma has risen…”), Laurel Sprague (“people living with HIV are viewed as inherently untrustworthy…”) and Bruce Richman (all of the U=U language). It pays off to remain teachable, even after all these years in the arena.

It is regrettable that, once again, the misfortune of someone famous has led to a teachable moment for millions of people, but there you are. Such is the world we live in.

I am pulling for Gareth Thomas, as are so many others. He exists in a world of privilege, yes (I make clear to the BBC that countless people are unable to access care or treatment), but also in a world that desperately needs the kind of celebrity leadership he can provide. As his announcement video makes clear, however, he must take the time he needs, first, to process this public coming out party and maintain his physical and mental well-being.

We’re behind you, Gareth.