I Watched Charlie Sheen on Dr. Oz So You Don’t Have To

Previous Next
I Watched Charlie Sheen on Dr. Oz So You Don’t Have To 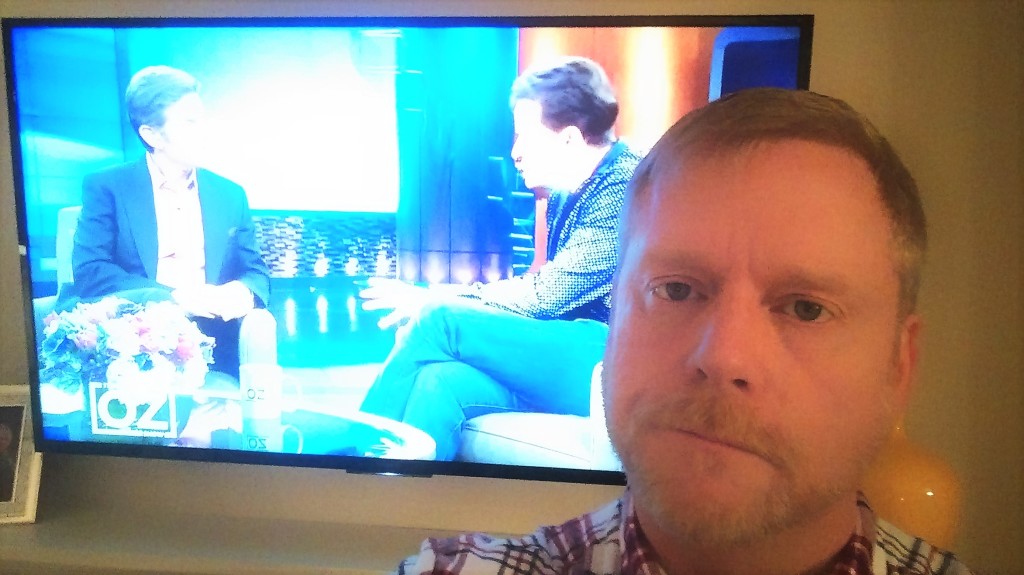 When taking an early morning jog with Charlie Sheen, in the first of their two-part interview for The Dr. Oz Show, the doctor sees metaphors everywhere. “You have to look down so you don’t see how steep the hill is,” he says as they putter upwards. “It’s sort of like life, isn’t it?”

Descending the hill sparks another metaphoric burst from the talk show physician. “It’s always easier going downhill,” he says to Charlie. “What’s going downhill like now that you’re public about your HIV?”

It became tough not to participate. Oh look, doctor. A rock. It’s like the hard place Charlie has found himself. Or maybe it’s the blunt instrument I will use to bash my head in after watching this inane, dangerously misinformed interview.

I had such high hopes. Charlie’s coming out interview on The Today Show was as focused and informative as anyone could have expected from the troubled star. I was actually moved by Charlie’s discomfort, and related to his obvious apprehension about making such a public disclosure. Better yet, the interview had the entire world talking about the meaning of “undetectable viral load,” something I never saw coming and a great service to HIV education.

Well, it was great while it lasted. I am dismayed to report that Tiger Blood Charlie is back and he has gone rogue. And his Chasing the Cure! conversation with Dr. Oz might be the worst thing to ever happen to AIDS cure research, or at least the most irresponsible reporting about it.

But first, before the TV show bothers to get to the “provocative development in his search for a cure,” we must wade through the first hour and tour the home of the we’re-pretty-sure-he’s-not-batshit-crazy-anymore star. He makes healthy shakes! He loves movies! He throws a baseball! Hey, there’s the tastefully appointed bedroom where he banged and allegedly assaulted women!

Charlie does discuss his treatment and their side effects. “Poopy pants,” he reveals. His advice is to wear black underwear. I intend to contact Treatment Action Group immediately to share this revelation.

To his minimal credit, Dr. Oz shows concern for the various addictions of his guest, from gambling to cocaine, but his light touch suggests this circus can’t afford for the star to bolt. Never mind that Charlie claims he only stopped drinking once the Today Show interview was complete, and that he has tried to stop “hundreds of times” before. Appearing on national television is apparently much more therapeutic than finding the nearest rehab facility.

But on to the second hour, an in-studio interview with a live audience. This is where it gets really interesting — and gruesome and creepy and utterly insane.

Dr. Oz revisits Charlie’s hard-partying lifestyle and then asks him more questions about the horrendous, terrible news that he tested positive. The sum of the conversation was that Charlie Sheen’s diagnosis – and by extension, all of us living with HIV – is comeuppance for his crimes against nature.

But the best was yet to come. Finally, well into the second hour, Charlie reveals that his Chasing the Cure! led him not to actual experts in the field, but to Dr. Samir Chachoua, a doctor in Mexico about which little is known, except that he resembles Grizzly Adams after a hard night in Tijuana. Charlie had such faith in his quest that he stopped taking his medications in anticipation of seeing this nut.

And this Doctor of Quackery, in a phone interview with Dr. Oz, claims to have cured Charlie of HIV. “He’s the first person in history to go HIV negative,” says the Mexican madman, apparently unaware of the name Timothy Ray Brown. It’s like a crazytown online denialist come to life. But wait, there’s more.

Chachoua says, and Charlie concurs, that he drew blood from Charlie and then injected it into himself to prove his case, and that Charlie remained undetectable. Never mind that this was mere days after Charlie had discontinued his meds, which surely were still working in his bloodstream. The entire, bizarre scenario was like something out of American Horror Story: AIDS.

Back in the studio, Charlie’s own doctors reveal that his viral load has spiked again. His personal physician pleads with Charlie to go back on his meds. Charlie sunnily agrees. “What, am I crazy?” he jokes, to scattered, confused applause. Thus ends his first chapter of Chasing a Cure!

I prayed that Dr Oz would then introduce someone from the American Foundation for AIDS Research (AmFAR) to preset real facts about the current state of cure studies. Wouldn’t treatment activism icon Peter Staley make an excellent guest? David Evans from Project Inform? Please God, anyone. My prayers went unanswered.

Instead, Dr Oz turns from the actual physicians in the studio to pursue a far more important line of questioning. At this critical juncture in the interview, it was important to discuss movies.

“You describe your journey, chasing a cure for HIV,” Dr. Oz says in his most empathetic voice, “in a way that is similar to your dad’s journey in Apocalypse Now.” I’m sure Martin Sheen watched with pride, knowing his film career had become relevant again. “Has your diagnosis with HIV brought you closer to him?” The camera moves in to Charlie greedily.

Somewhere Barbara Walters was rummaging through her penthouse for a rope to hang herself.

There were actually a group of HIV positive women in the studio that day, some representing Positive Women’s Network, and during the taping they were given the opportunity to offer what was undoubtedly some much-needed perspective. But evidently they had nothing to say about Apocalypse Now or they were really bad at metaphors, because the segment was cut from the broadcast.

Charlie Sheen isn’t going anywhere soon. There is always hope he may regain his senses and become the high-profile cure advocate we need. But what we are currently witnessing is the exploitation of a deeply troubled man with multiple addictions.

Whether Charlie Sheen follows the path of other distressed celebrities, be it recovering addict Robert Downey Jr. or the very dead Amy Winehouse, remains to be seen.

(This piece originally appeared as one of my blog postings for POZ.com — Mark)