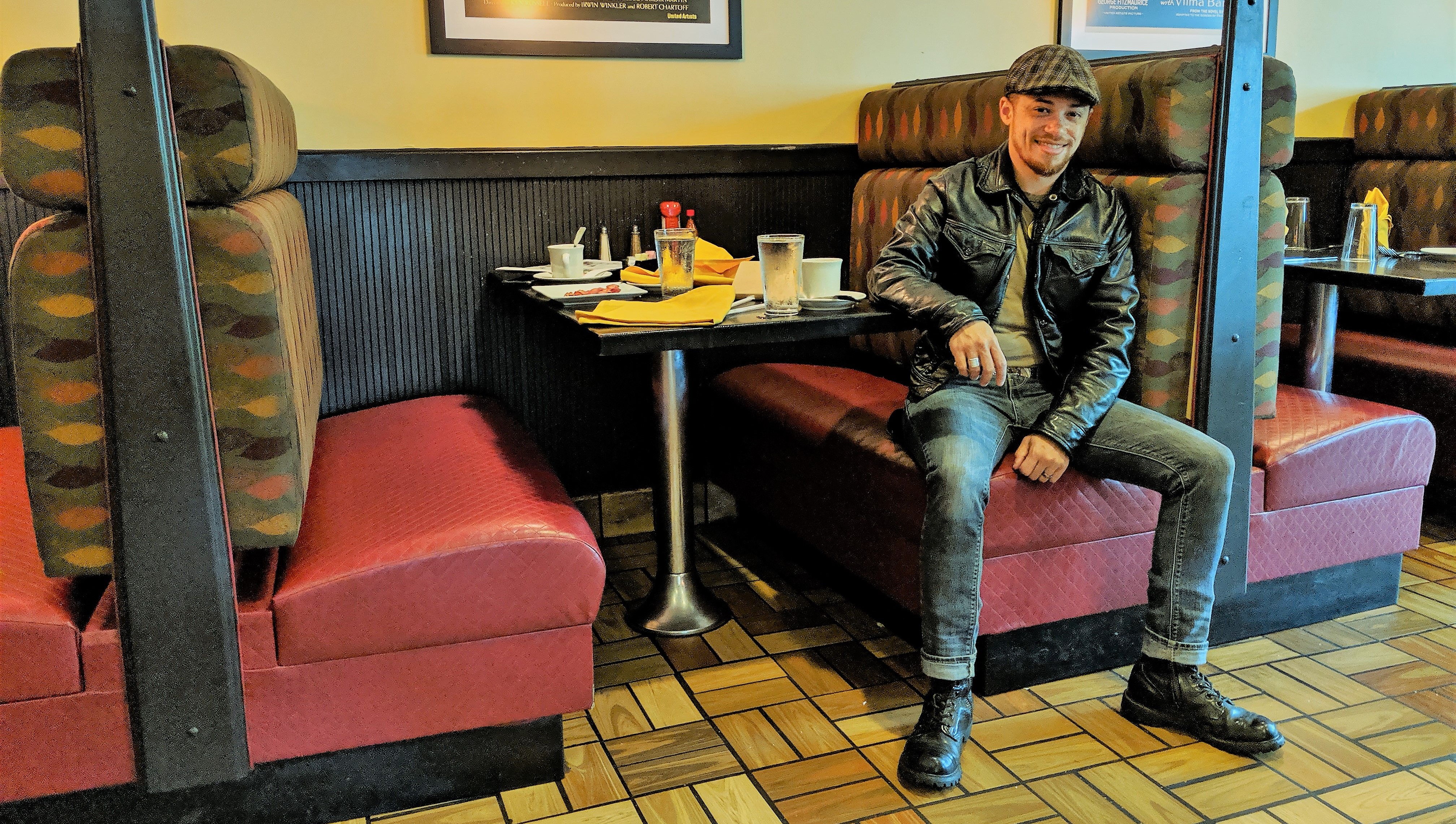 Jack Thompson, who just won the 2019 International Mr. Leather (IML), is a lot. And he carries it well.

Jack is biracial. He’s gay. He’s transgender. He’s extremely kinky, depending on what scale you use to measure such things.

Jack is also utterly transparent about all that he is, to a disarming degree. His speech at the IML competition (“You are enough.”) laid bare all of his identities and became an instant viral meme.

Over breakfast at his favorite diner in his newly adopted home city of Baltimore, Jack discussed coming out (as many things), sex, drugs, HIV — and his reaction to a transphobic social media post by a leather community leader that nearly eclipsed the drama of Jack’s win at IML.

Here is our conversation, edited for length and clarity.

Mark S. King: You spend a lot of time here, at Valentino’s Restaurant?

Jack Thompson: Oh yeah, they’re open 24/7. I can have breakfast any time of the day.

You’re running around already as Mr. IML. Just this weekend, you were in DC for Pride, then up to Philly, and then back here for an event at The Eagle in Baltimore.

Yeah, after IML there isn’t much of a break. You run right in to Pride. And being on the east coast you can get to so many different places for events.

Your husband, Geoff Millard, was 1st Runner Up for Mr. Bootblack at IML this year.

I’m ignorant. I think Mr. IML is for the big dominant guys, and Mr. Bootblack is for the submissive ones.

Unless you are running for a “Boy” title or a “Master” title, you can identify as anything you want. I identify as a submissive. My husband identifies as a Daddy. But a lot of people have that idea, that you compete for IML and put on that leather cap, and you are the domest dom in all of dom town.

I went to IML once, more than a decade ago, but only because I was living off the remnants of my muscle boy body and I wanted to strut around in a harness.

Yeah, but I also never left the hotel. I stayed in my room shooting up crystal meth and having sex. For five days without sleep.  I have so much shame and regret about it. Do you see much of that? Does it concern you?

It’s a community problem. I’ve seen it for years, and seen friends’ lives destroyed for periods of time. And there’s people who just assume you do drugs because you go to these events. Actually, there are more and more spaces for sober people there. 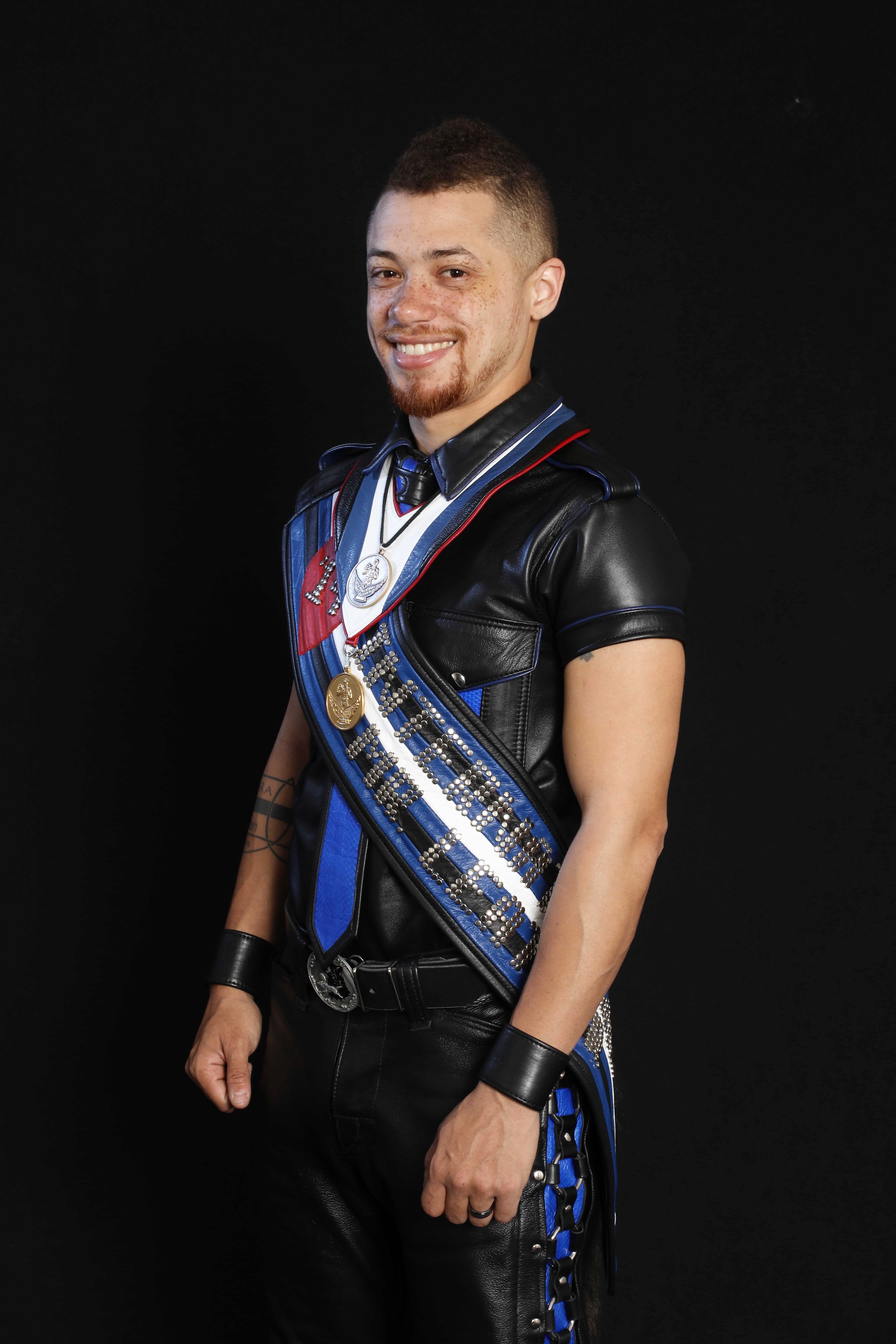 There’s been an explosion of trans awareness over the last few years. My trans activist friends would point out that this has been a long, hard road, though.

I came out as trans when I was 15 (living in the Bay area). That was 18 years ago. And it was exploding because there were a lot of hate crimes going on.

I know several trans men who were lesbians first, who thought they must be, before they realized they were trans. And gay. It’s a perfect example of the difference between gender and sexuality.

I didn’t even start dating men until I met my husband. I still am attracted to women. It gets very deep very fast between us, with women. I just got out of a long relationship with a woman about a year ago.

Well, those women. They get in deep so quickly…

(laughs) And I don’t have the capacity to get into something that deep with someone else. I have my husband. He’s my port in the storm right now, with all this craziness.

Speaking of crazy, right after you won, some bonehead says a transphobic thing that sounds like it could have been said in 2002. And it was someone you think would have known better. (Only hours after Jack’s win, the leader of a regional leather association known as Craig MrCode posted on Facebook, “I am happy for the winner, BUT it is International MR. Leather. He identifies as a man. But not born a man. I feel that the decision is politically motivated. Now this is just my opinion.” The post was later defended by MrCode, making things worse, followed by calls for his ouster as leader of the leather association. He was removed within a couple of days. Leather clubs are typically known as inclusive, safe spaces for people of trans experience.)

I understand that the world doesn’t deal with trans issues. If you are someone who doesn’t have many trans friends, it is easy to not understand. I am all about educating, and saying hey, here are articles why your opinion is not necessarily correct, or this is how what you said personally hurt me. I didn’t even hear about what happened until he stepped down. I was expecting, actually, way worse of a response. It wasn’t that bad, and the response of the community was 150% better than I thought.

Do you think someone like that is teachable, or was there something in his comments that felt too far gone?

I’m all about teachable moments. People tried to educate him and he just doubled down. At that point I’m like, okay, it’s your own funeral then. I hope there’s a lesson learned for the general community. You can come back from this. I would be so happy if he did some learning and came back and did something about it.

Your speech at IML was so universal. The message of “you are enough.” What kinky kid, what gay kid, or actually any human hasn’t felt like they were not enough. You struck to the heart of that.

I’ve had that feeling for so many reasons. Every single part of who I am is so mixed up. My gender, my sexuality, my size. Everyone in this community has felt like a deviant, which is why the trans controversy hurt so much.

Can I ask how long you have been living with HIV?

Speaking of shame, we tend to stigmatize people who test positive these days, when they “should have known better.” How was it for you?

I had just started working as an HIV tester and counselor at an organization. I got sick, like with a bad flu. I got my diagnosis at a clinic when I went in for that. I did testing and counseling after that, but it was triggering, so I took some time off and my bosses were very understanding.

Do you have regrets about not having been on PrEP?

PrEP hadn’t really taken off. I think if it had been a year later, I probably would have been on it.

And that’s what infuriates me as a PrEP advocate, that Gilead, the company that makes Truvada, refused to promote Truvada as PrEP when they could have, so much earlier than they have. People got infected unnecessarily. But that’s my thing. Are you undetectable?

Yes, I have been since the beginning. When I hop on Grindr, there are a lot of people who still don’t know what these things are, like U=U and PrEP. HIV is in my profile. I’m used to guys hitting on me and then rejecting me.

Well, you provide so many reasons to reject you!

(laughs) Yes. What on the menu of reasons do you not want to sleep with me?

Back in my hunting days, I found that if I had to become an HIV educator with someone, then we’re not going to fuck. I’m not going to be put in the position of educating you so that I can fuck you.

I don’t mind doing a little bit of that. But if I’m just hooking up with you, you’re probably not even giving me your real name so why am I giving you a lecture? This is no longer sexy. But I will do some initial steps to educate. 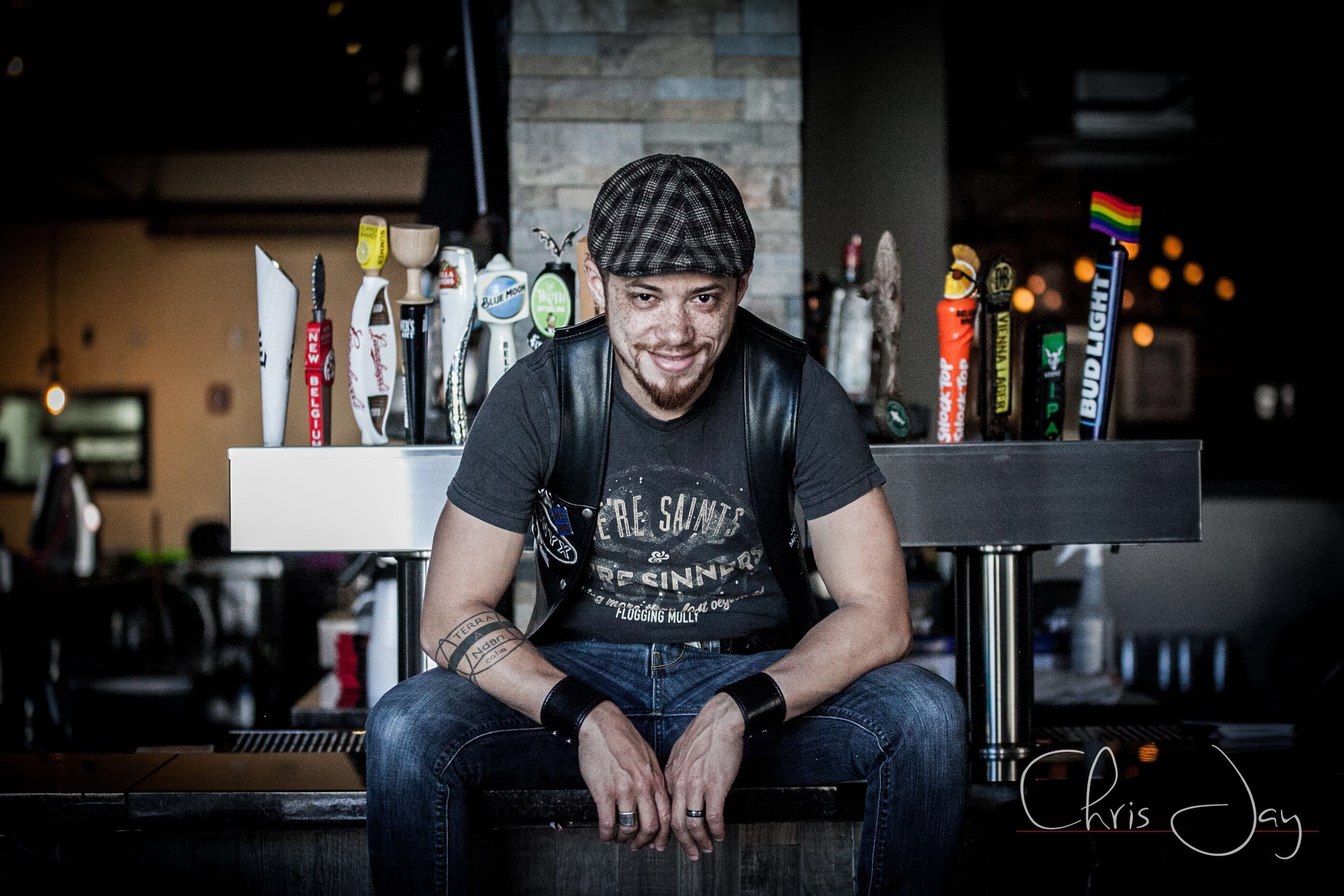 Do people fetish you as a trans man?

Oh yeah. People fetishize everything. I mean, you’re fetishizing that guy over there because he goes to the gym every day. So why is it bad for them to fetishize you for whatever reason? Of course, people from marginalized communities have been fetishized for things over the years and there’s a lot of history, and shame…

Yes. I have a thing for big bearded daddies. That’s my type. Our fetishes play into our hookups. It depends on how you do it. If someone comes at me and they’re all like, “oh, you’re a man with a pussy,” and there’s this big thing about it, it’s not about me anymore. It’s about a part of me. I don’t have patience for that. It’s about people having no tact.

What’s your message during your reign as International Mr. Leather?

I’m proud of a community that is now, officially, proud of me. I’m getting messages from people who identify as trans who are getting a harness to come support me at an event, because now it feels like a safe space for them. This year is going to be amazing, but it’s not about me. It’s about people seeing a message that we will not stand for transphobia in our spaces.

Thanks so much, Jack. This was fun.

It was. Thanks, Mark.