Shopping for Socks at the Mall with Larry Kramer

Previous Next
Shopping for Socks at the Mall with Larry Kramer 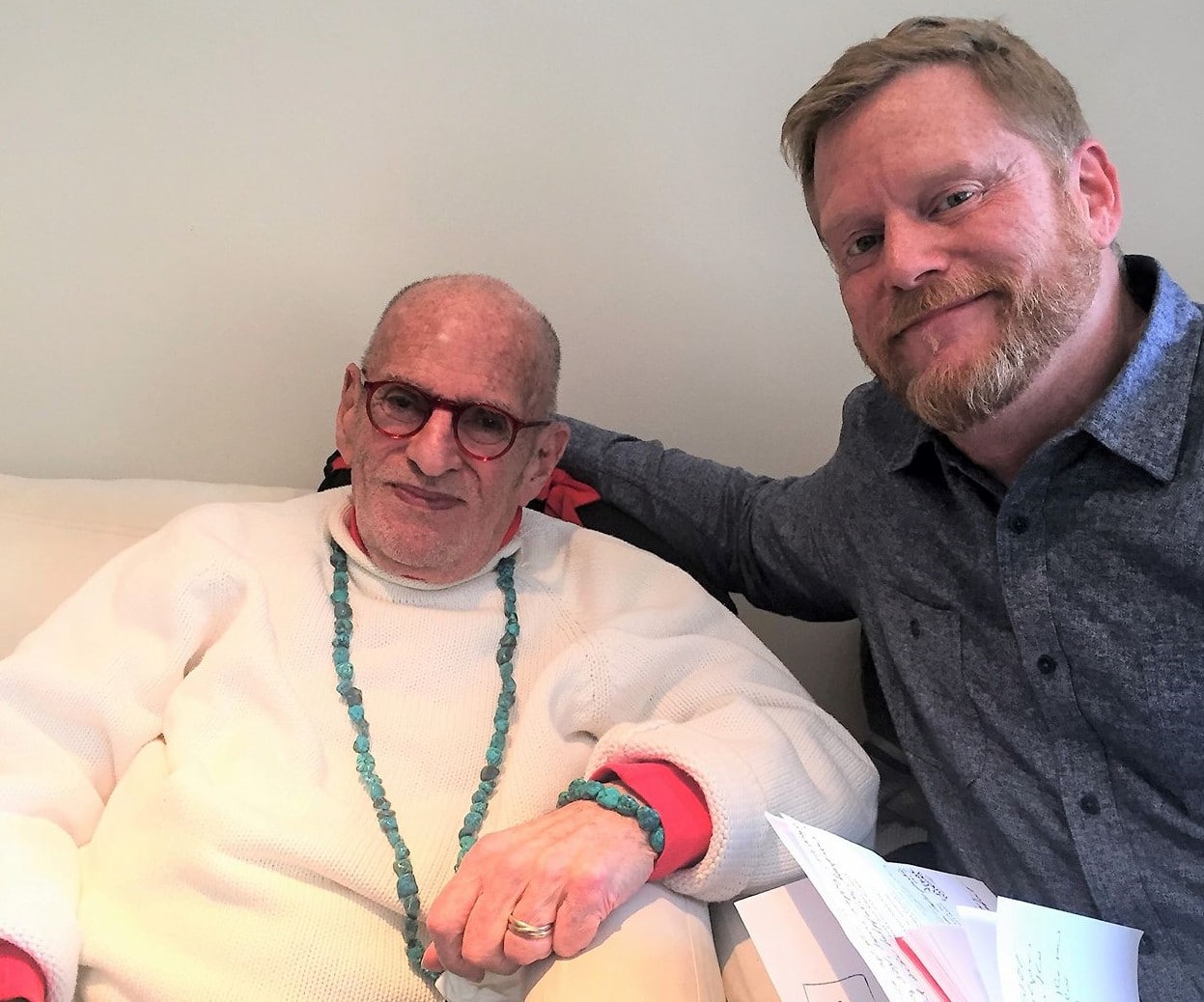 (This is a work of fan fiction, and Mr. Kramer loved it. See postscript below.)

The mall was abuzz, with people darting in and out of stores, wrangling their kids and chatting on cell phones. I preferred it that way, because it kept Larry in a fairly calm state of quiet attention, ever vigilant as to where and when his next mortal enemy might appear.

“Hold the railing, Larry,” I instructed as we stepped onto the escalator. He was still wobbly from the blood rush of spotting a confederate sticker in the parking garage and I felt protective when strolling with such a national treasure.

“How about I just lick the ass of a green monkey?” Larry replied. “If you knew the germs on these rubber banisters you’d slit your fucking wrists…” He trailed off.

“Then hold my hand, Larry,” I countered. He complied, if only so he could launch our clenched hands above our heads, as if we’d just been pronounced married or one of us had won a title match. He kept our hands there the whole flight up the escalator. When I glanced at him his eyes were years away and his lips moved quietly. A White House protest, I figured. Or perhaps a pharma demonstration.

Well, he likes this and he’s calm, I thought. Maybe we can do this on the way back down.

It was hard enough getting him to the mall at all. I had arrived at his place just in time to break up an altercation between Larry and the mother of the Girl Scout from whom he had ordered eighty boxes of Thin Mints, which were presently scattered across his front porch and had suffered the wrath of Larry’s ACT UP boots.

Larry had no intention of paying for the cookies, as it turns out. He was ferociously screaming that his non-payment was to help bankrupt the corporate pimps RAPING THAT LITTLE GIRL! Both the mother and the girl in question had taken refuge in their car, the girl crying hysterically about not wanting to be raped, while I managed to hold Larry back from beating their Honda with a lawn sprinkler until they made their eventual escape.

But that was, after all, fully two hours ago, and multiple indignations could befall Larry Kramer in the course of an afternoon. All things considered, we were having a lovely day.

There were minor snafus, of course. Already, a Sprint salesperson had paid dearly for his unfamiliarity with rollover minutes or the level of employee giving to needle exchange. As we passed Abercrombie & Fitch, Larry stopped in their doorway and bellowed “FAGGOTS!” again and again, for two full minutes. It might have gone on were it not for an astute customer in the Barnes & Noble, who brought over a copy of “The Normal Heart” for his signature. The gesture appeased him, then produced weeping and finally Larry’s agreement to relax on a bench while I stroked his back.

“You could do with a little less drama, you know,” I offered.

“Fucking murderers,” he replied, but his fatigue was setting in. “Drug companies. Politicians.”

“Let’s not forget organ donors, sweetie. And surgeons who install livers into the bodies of old, wrung out former drug users.” Larry made a dismissive, huffing sound.

“You’re an apologist, Mark. You forget too much.”

“You remember too much, pumpkin. Now let’s check out Macy’s. I need socks.”

The Macy’s perfume spritzer girl couldn’t list the chemical compounds in “Citrus Spring,” so of course Larry brought her to tears by saying it was she, and not the perfume, that smelled like a dead lab rat. He upped the ante by grabbing bottles of nail polish from the counter and splashing her in Jungle Red while screaming “the WHOLE WORLD is WATCHING!”

Then all hell broke loose.

Security arrived and found a crying, seemingly blood-soaked spritzer girl and Larry, elated at the appearance of men in uniform, dropping to his knees, continuing his chants, and then collapsing onto the floor in his best dead body position. A twittering crowd quickly formed, some of whom had followed incredulously since the scene at Abercrombie.

I considered making a chalk outline of Larry — I kept a piece in my jacket for occasions like this and it gave him such joy — but something in me snapped.

“Get up this instant, Larry,” I ordered, and he opened a dead eye. The security gentlemen seemed relieved someone was taking charge of the deranged elderly man lying prone before them. “I’ve had enough for one day. Save it for the National Mall. World AIDS Day is coming!”

He cocked his head towards me. “What would you know about AIDS, Mark? You’ve never had infections! Where are your lesion scars? You still have your first fucking liver, you pretender! You lightweight!”

A woman in a nursing uniform broke through the crowd and looked back and forth between the spritzer and Larry, trying to determine who needed help most urgently. Everyone, including the sales girl, nodded in Larry’s direction.

“Sir, have you fallen? Do you understand me?” she asked him.

“Fuck yes. Shame on your profession and your paralyzed inaction in the face of… of…” Larry contemplated what the woman’s worst offense might be while surveying the floor around him in hopes of locating more red polish to splatter. He found none.

“Sir,” she went one, not yet convinced of his stability, “who is president of the United States?”

God I wish you hadn’t asked that, I thought.

“Shall we catalog them?” Larry bellowed. His second wind was now in full gale force. “First, Ronald Reagan has the blood of our brothers and sisters, too many of them, on his hands. He murdered them as sure as I’m standing here,” a posture which was technically inaccurate, although Larry did allow his oratory to raise him to a kneeling position.

“I can take him from here,” I interjected, and pulled Larry up and beside me. “If you’ll just allow me to get him home…”

“And then Bush continued the slaughter! He treated us like shit!” came the next outcry.

The security men agreed without hesitation. “If you can take responsibility for your father and agree to exit immediately…” one of them said. I actually half laughed at their mistake, and at the irony.

“No problem,” I promised, and we said our goodbyes as Larry’s outbursts trailed again and we walked back to the escalators.

He took the railing without protest or remark, and that disappointed me. I kind of missed riding down with our clasped hands thrust defiantly in the air.

—————————
This is a work of fiction. At the time of its writing in 2010, I had never met Larry. That changed in 2016, when I was honored to write a profile piece of him for POZ Magazine, after which we became friendly. The man in person proved to be far different than this farcical essay, although I still get a kick out of it (and he liked it, too). I will never forget the day Larry pronounced me “a serious writer.” The world misses him, and we are forever changed by his life and his death.