Previous Next
Probing My Aging Penis 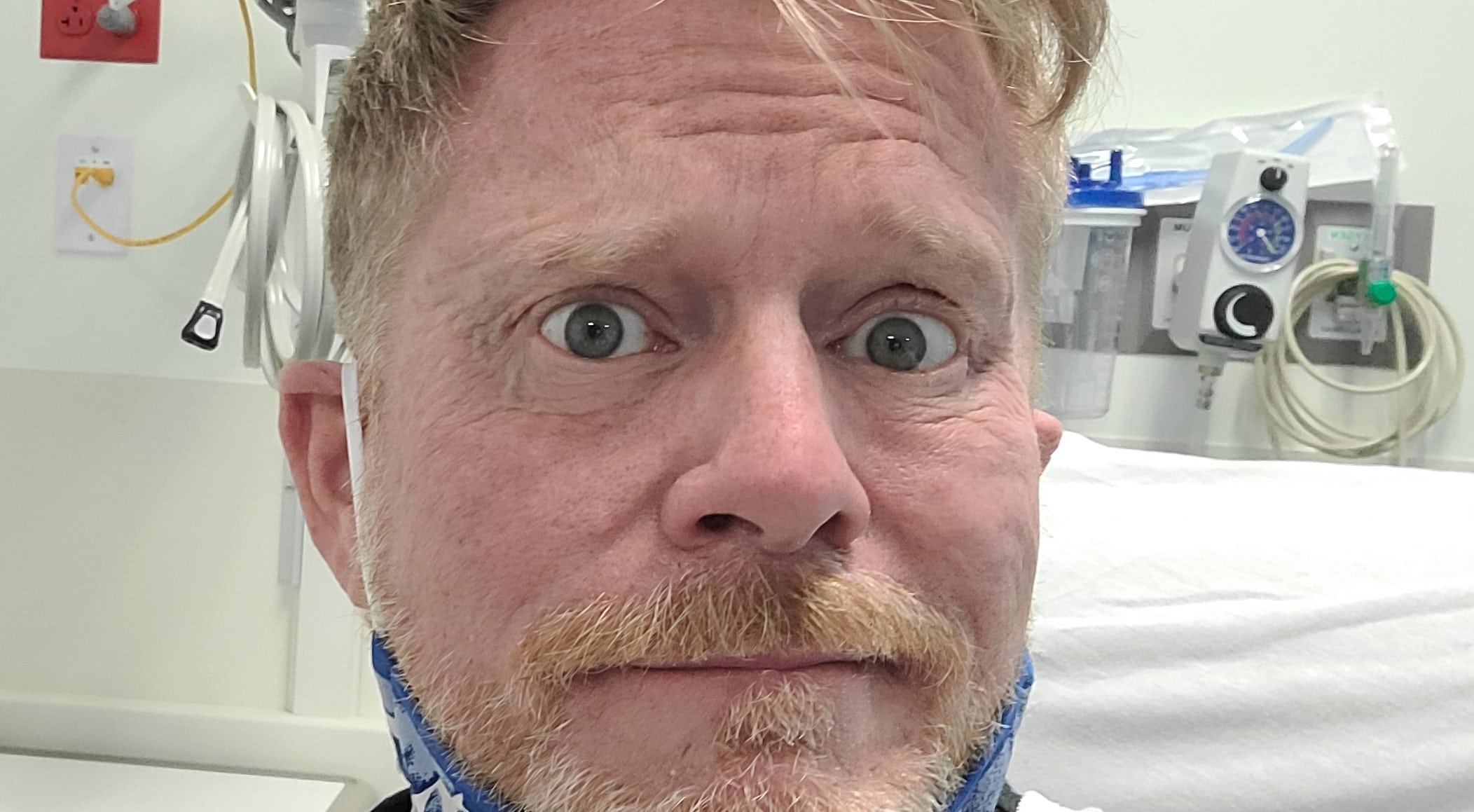 File this under “things they don’t tell men about getting old.” If you qualify, this might help you.

I am a long term HIV survivor at the magnificent age of 60 years old. They don’t tell guys that if you live long enough some clinician is going to slide a tube down your penis. It’s unavoidable. If you’re lucky.

My bothersome symptoms began a few months ago. I was already on generic FloMax to keep me from getting up to pee multiple times a night (that marvelous gland, our prostate, tends to turn against us later in life; perhaps it goes on strike over working conditions). My new symptoms were more about needing to pee right this second and I mean now. When I would stand after sitting a while, for instance.

My visit to the urologist was uneventful. “Nothing notable,” he said, which might be the most withering feedback I have ever received after a man has closely examined my junk. After peeing into an electronically tricked-out basin, though, the contraption measured my stream “a little weak,” in yet another pronouncement sure to instill pride in any man.

The urologist then scheduled a cystoscopy, a procedure where the dreaded camera gets snaked into your urethra to check things out down there. I’m folding my body inward just typing that sentence.

I showed up for the procedure and stripped to a hospital gown and waited in the pre-op area, telling every nurse and attendant who would listen that I was terrified. They were all very nice, but they weren’t having a tube larger than a #2 pencil stuffed down their dick that day, so they were unswayed.

“Ask for the lidocaine,” one nurse whispered conspiratorially, referring to a topical anesthetic, and I perked up for more information. “They don’t always do it, but if you ask, they might put some of that down there first. It helps.”

God bless that woman and her family and her descendants for the rest of time. I started saying “lidocaine” like a mantra, to every person in hospital garb that walked by, to passersby in the hallway as they wheeled me into the procedure room, and then amplifying my pleas (“Lidocaine! Liiiidocaine!”) to the attendants in the room.

I’m an advocate.  We advocate. 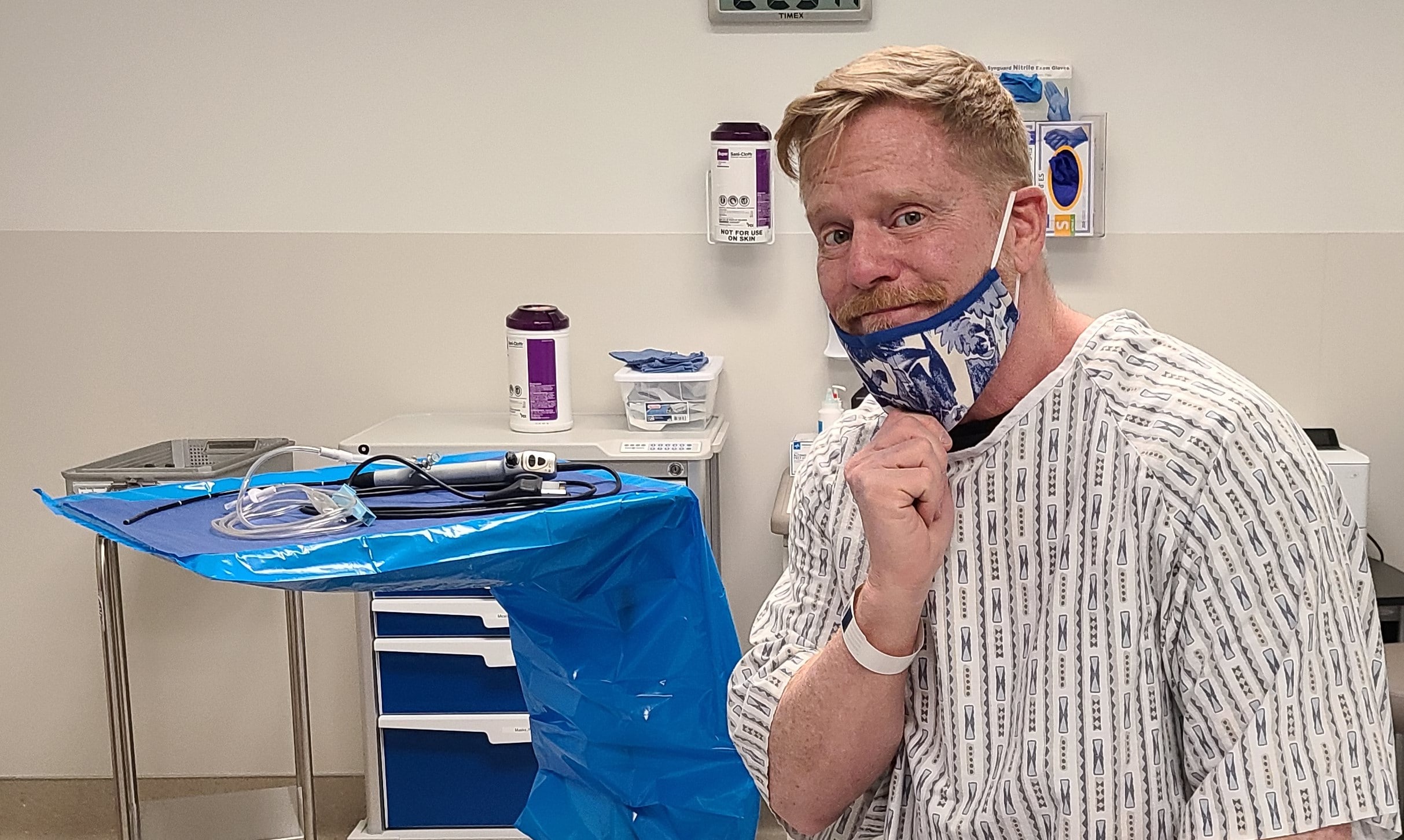 Take a close look at the size of that tube on the table, people.

The procedure was mercifully brief and, thanks to the blessed lidocaine I suspect, there was no pain. It felt… odd. And then it was over. Right on the spot, the urologist said everything looked fine down there. He seemed resigned to the fact my urethra and bladder didn’t need any further tinkering from him.

So, then, what’s the deal with the urgent urges? The urologist referred me to something called “pelvic floor therapy,” and this is where things got interesting.

Pelvic Floor Therapy sounded sketchy to me. Worse, like they would make me exercise in a way that did nothing for my biceps. I was half right.

As it turns out, your pelvic floor is the muscle group which basically holds your guts up and in. They also include the muscles for keeping pee and poop inside until we’re ready for the john. Yes, this isn’t comfortable for me to talk about, either. But I learned some things from my pelvic floor therapist.

Men can lose some pelvic floor muscle control as we age, and women can lose some control after childbirth. In both cases, physical therapy can restrengthen these muscles, most commonly with the use of kegel exercises for men and women, during which we basically squeeze and release these muscles ten times, a few times a day. Just like any other muscles, they strengthen and work better.

The biggest aha! moment came when we discussed diet. My pelvic floor therapist explained that our bladders really, really dislike artificial sweeteners, and she frowned when we counted up all the diet drinks, juices, and packages of sweeteners I consume on a daily basis.

“You know when you’ve brushed your teeth and then use a strong mouthwash, and how intense that feels, and how much you want to spit it out?” she asked me. “That’s your bladder with artificial sweeteners. It’s irritating to your bladder and it wants to spit it out. That can cause those sudden urges.”

And wouldn’t you just know it, by my switching to – gasp! – a little sugar in my coffee, and water products that contain no artificial sweeteners (those can be tricky to find, read labels carefully), my sudden urges have dissipated to a large degree. And I hardly had to exercise the kegel thing, although I’m sure that’s in my future.

And that is your lesson for the day on being old, a gift that can take some careful navigation. Just stay mobile, do your stretches, try some kegels now and then, and cut back on the artificial sweeteners.

And, because this time will surely come, for God’s sake ask for the lidocaine. You’re welcome.

(Read more about pelvic floor therapy here, or use this handy guide to locate a therapist near you. No, nobody paid me to say that.)