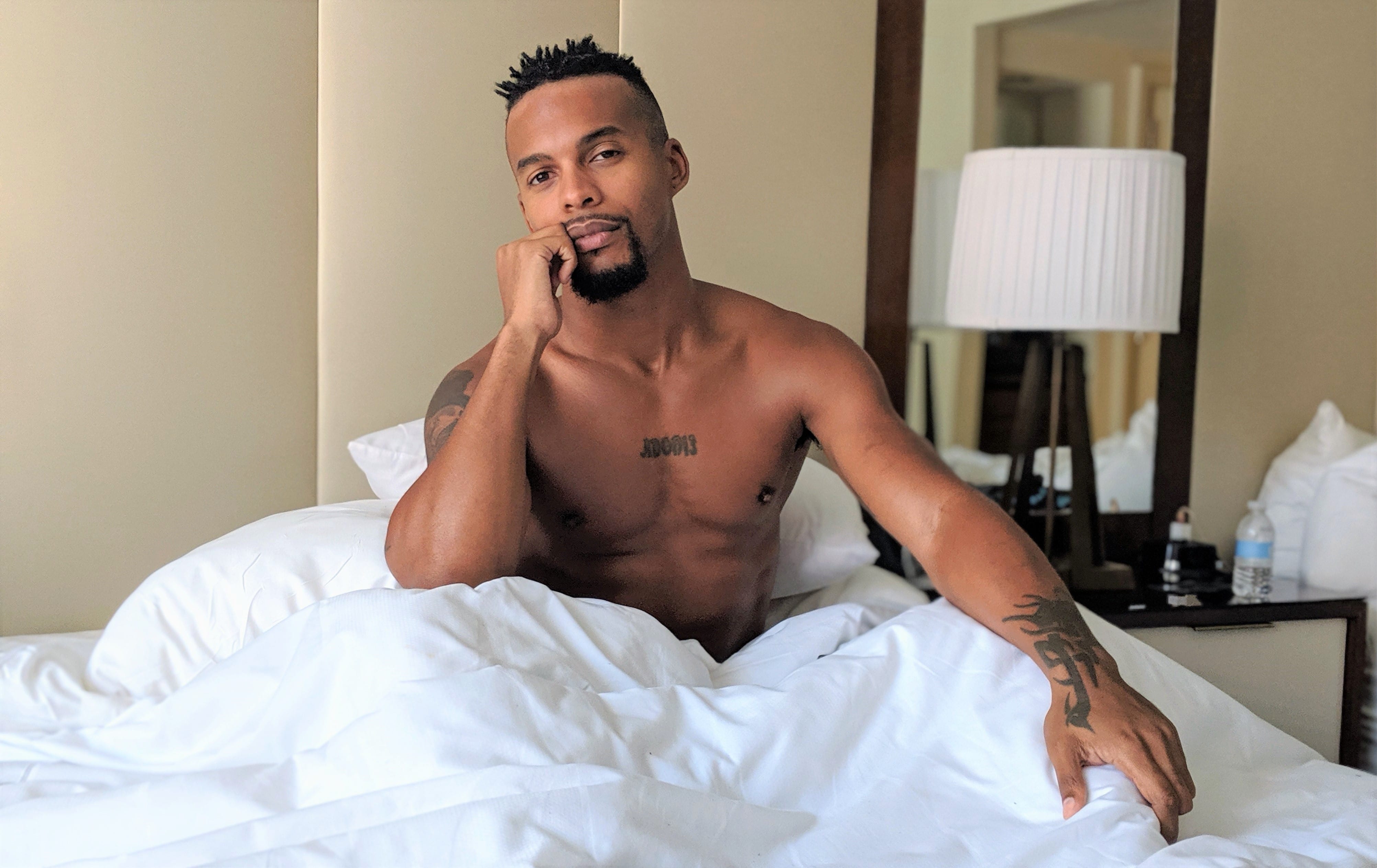 Oh, and then there are his outspoken beliefs on the reasons for an uptick of meth in the gay Black community, his thoughts on racism among gay men, his volunteer work as “Undetectable Man,” and his support of the Washington DC campaign, The PrEP Squad.

My interview with Jacen happened in a Washington, DC, hotel room, which seems about right, and was immediately followed by a quick photo shoot where the young adult performer enthusiastically bared himself for my cell phone camera. Yes, these things wear heavily on a humble blogger, but someone has to do it, folks.

Here is our very lively conversation, gently edited for clarity and length.

I know. I try to make what I’m talking about a lot louder than the fact I am HIV positive.

Well, you are very loud about a lot of things. In several areas. When were you diagnosed?

At 16? How was it you were you tested at that age?

I was tested by my pediatrician. She was actually concerned that I had cancer. There was a big cancer scare in the early 2000’s, and I went in with swollen lymph nodes. She was concerned I might have leukemia. But she paused and asked if I was having sex, and I was like, “yeah.” I told her I was having sex with guys so she ran the HIV test.

Wow, there are doctors of adult gay men don’t even think to test them. That’s a pretty savvy pediatrician.

Yeah, she had a very Tracee Ellis Ross vibe. She was amazing.

How did you respond to the news you were positive?

Honestly, I didn’t really take it in. I was so concerned it might be cancer, and I didn’t want to get that. I knew that HIV was manageable. In my ninth-grade biology class, we had people living with HIV come speak to the class. I did have some worries about living with HIV, and even had an AIDS diagnosis when I was 19. I had been given the option of not starting meds until I needed them, and my t-cells fell below the AIDS marker. Then I was on medication. It made me realize, okay, this is real.

I had some blowback from people when I was open about my status, so I held back, but then when I was older, around 25, I just decided to say this is who I am. People were a lot better about it by then. 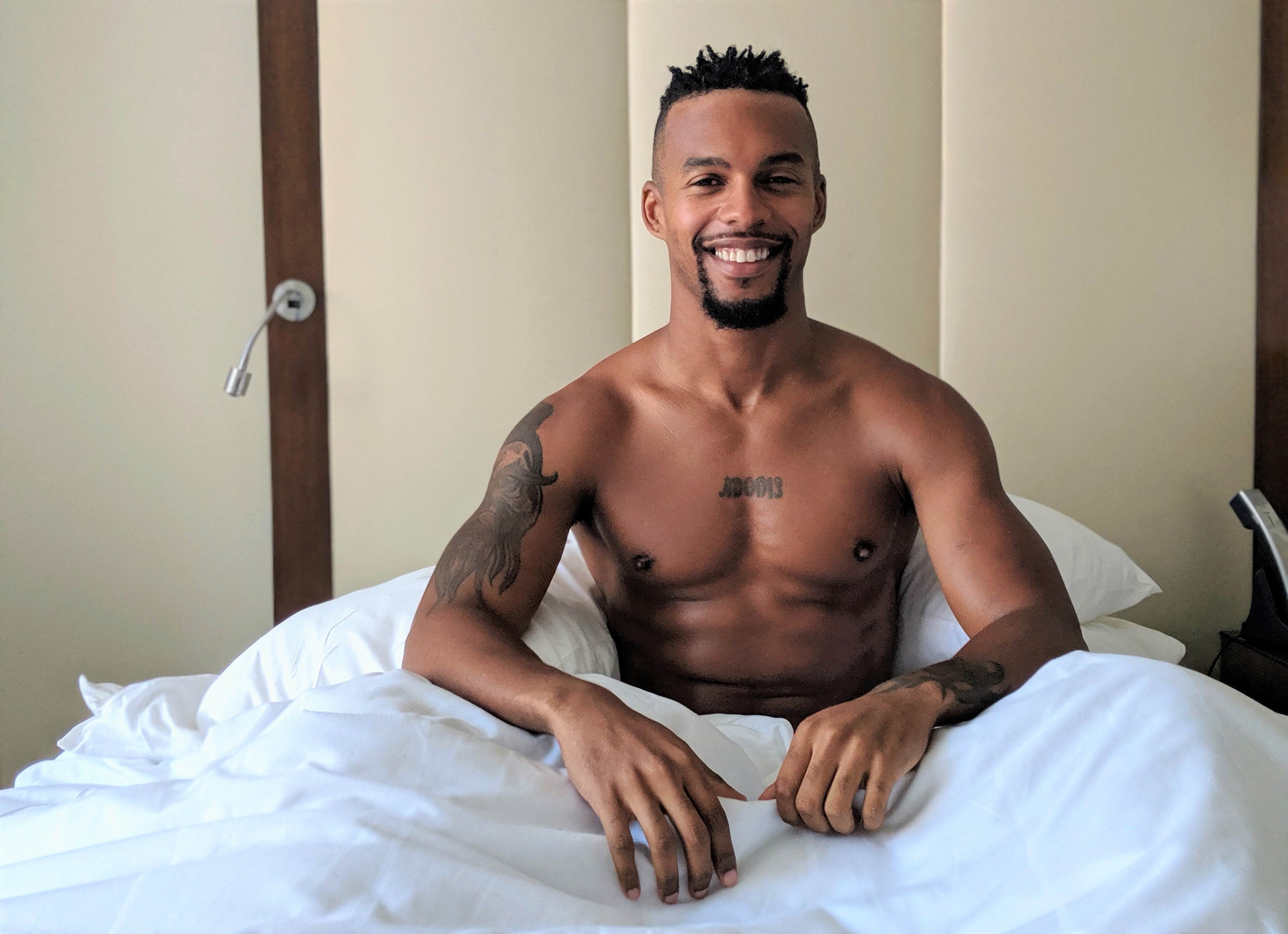 When did you get involved in adult entertainment?

And you have an Just for Fans page on Twitter, where people pay you a subscription to watch your exclusive sexual content. I hear that has really changed the landscape for adult actors. You own the content, you control it, and you’re all making a lot more money then when you worked a day at a time for a studio film. Why did you start doing the Just for Fans stuff?

I wanted something more, and be more open about HIV issues. I felt like it was important. It felt natural. So, when people asked me about HIV in interviews, I could say yes.

And in your sex work with one-on-one clients?

How often do you have to be the sex educator, and does that get in the way of the sexy stuff?

I have had to do that, but I enjoy it. If you’re coming from a place where you don’t know, I’m not offended at all. And then we can have even hotter sex because we’re both informed and it’s a healthier space.

And yet you have done studio films too, and they have a very checkered reputation about being cool with HIV positive actors, even the gay ones.

With some studios it isn’t a concern. Or it was a hush-hush type of thing. And the message of U=U was around by 2017 and people were getting information about it. People were more concerned with STI’s. My doctor gave me a full testing panel for me to show them.

That’s interesting. I’ve talked to other actors who have been really hurt by being open about their status. Have you ever lost a job because of it?

I haven’t lost one, but people are cautious working with me because I’m…

(laughs) Yeah. I don’t really work with studios now. Having the Just for Fans content has meant I don’t have to put up with…

Playing another Black convict having sex with his white parole officer?

Yeah. Or work with people who are not willing to really listen to what I have to say, maybe realize they are not a person of color and they could listen and humble themselves and receive the message, and produce content that is inclusive of everyone.

That’s unfortunate. I think what people fail to realize is context. Kids are going to the internet for sex education. So, our job description must change. We have to be mindful that we are responsible for the education of people having sex. When we get into bug chasing, that’s problematic. We have to start thinking about mental health, and ask why someone wants to get off to that. This is going to be seen by the masses. And some kid is watching videos of guys slamming meth. And now you see 17 year olds getting involved with crystal meth.

Both. You have these directors and that is their fantasy. They are influencing new kids in the business. My question for the viewer is, are you dating people of color? Are you engaging in relationships that are beyond the objectification of Black men? A lot of them say no. I think they need to reevaluate what they think is hot. Some people don’t want to think past that sexual stereotype because it messes with their fantasy.

It depends on if, outside of the fucking, you are willing to engage and have a relationship with a person of color. A lot of white guy get off on the video and then go back to their white spaces.

What’s the difference between being attracted to dark-skinned men, and being a racist?

My partner is white.

He does not find other white guys attractive. And typically, you know, many gay white men are not the best humans. So, for him, it’s not a fetish as much as he wants to love and be with a certain kind of person. There’s a difference between committing to a relationship with someone and being involved in their community, and just getting off with a Black guy.

You just said that many gay white men are not good human beings. Tell me more.

There’s a difference between being a liberal, and being truly conscious of race relations. I have met people who will shame Donald Trump but will still create racist adult content. Or they will dismiss Black Lives Matter. Or you have pseudo allies, who say they are with you but when there is a call to action, they are missing in action. And they don’t include the people they say they are trying to help. I wouldn’t think of trying to help the trans community without listening and being led by trans people.

You were on a panel after a screening of Party Boi, the documentary about crystal meth use among gay Black men. The discussions at the screenings of that film have included a lot of anger over what Black gay men believe has been done to them by white gay men. They lay the crystal meth epidemic among Black gay men squarely at the feet of white gay men. As a recovering meth addict, I have a point of view about this, but I haven’t dared write or say much about it.

Black gay men were not involved in meth as we see today. There is a subgroup of white guys doing meth, and they’re watching porn and seeing this image of the Mandingo, and you see who is getting hired for sex work to show up at affluent white men’s houses who want to party with them. The Black community is still doing coke. Meth is highly addictive, and now that Black sex worker is getting addicted, and it is trickling down through the Black community. Now we need to talk about staying hydrated, risk reduction, staying on our meds. We’re seeing Black gay men become tweakers and not taking care of themselves.

I am going to dare to respond and please give me your reaction.

There is racism, and there is uneven power and privilege, and that permeates everything. It affects HIV services and prevention and what job we get. I don’t have to tell you. Okay. Now. That all said. I also know that drugs migrate. Meth didn’t start with gay men. It started with Nazis, then truckers and bikers. Then truckers gave it to young female prostitutes. Drugs migrate. So, I want to say it is as simple as that, but when in doubt return to my first point, which is that racism and privilege exist. Now, my recovery process tells me I am responsible for my own recovery and for my addiction. But I guess it’s easier to say that and get help when you’re a white gay man.

And here’s another way to look at it. Why would you create a meth campaign that only appealed to gay white men? Why not send that message out further to people of color? If you know this is harming your community, why not prevent it from harming another community, too?

Something a Latino community leader told me about all this made a lot of sense. He described young gay Latinos in Los Angeles who got involved with white gay men, and then in turn got involved in crystal meth. The leader explained to me that when that white gay guy dumps the Latino guy, the fall for the Latino will be much harder. He will struggle to find community support or to afford a rehab. Meanwhile, the white guy might get clean at a nice facility and go to (mostly white) crystal meth anonymous meetings and get all kinds of support.

Yes. And why are we not reaching out to other queer communities? And now we as Black gay men must create things for ourselves because you haven’t included us or given us resources. We understand that better, I think, that it affects everyone. For white guys, gay Black men are an afterthought.

When I was in active addiction, it never occurred to me to ask if the guys I did drugs with had the resources to get help. I was sick, I was driven by my drug use. I know this doesn’t excuse me, I’m just saying that I encouraged drug use and did things that were driven by my selfishness as an addict more than anything else.

I’m not saying that you in your active addiction were responsible for your actions. I am saying that the people putting together meth campaigns and who have resources to address meth, those people are responsible for including the broader queer community. They’re only looking at it from a narrow perspective. We must realize we have a whole village behind us that includes a lot of people who don’t look like us.

This conversation fascinates me, and I’m so grateful to you. God knows I claim my privilege, but more and more I am convinced that my primary purpose should be to hand the mic and the spotlight to people like you, namely, men and women of color.

Yes! I hope so. Thank you so much, Jacen. This was great. Thanks for letting us get through some touchy stuff, too. You’re a good teacher.

Thanks. And you’re teachable!