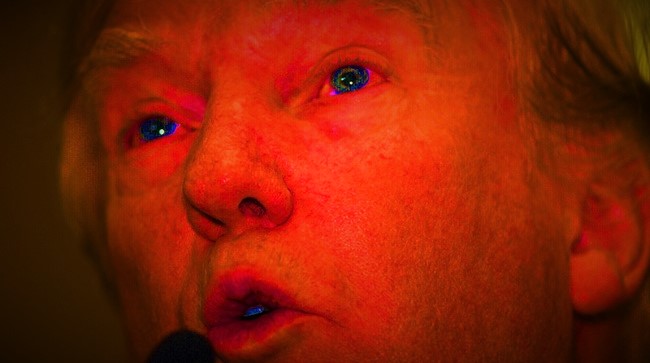 I am on my feet at the Thanksgiving table, and my fists are slamming into the linen napkins. Silverware is quaking, pottery is rattling. The force of a particularly hard blow to the tabletop sends a dinner roll catapulting from the bread basket.

My screams are borrowed from post-election protest marches. They are deafening and unending. Fight him. Reject hate. Protect ourselves.

Surrounding the table are members of my family, some red and some blue. They pay me no attention. They are chatting among themselves, unaware of my thunderous cries. Forks and spoons and now falling to the floor and cartwheeling away. A bowl of green bean casserole has rumbled to the edge of the table and any second now it will

I wake up. It is morning in America.

While eating my breakfast cereal I luxuriate in thoughts of assassination. Oh my God that’s awful, my husband tells me, don’t even think such a thing. So I search for it online. I enter the letters “T-r-u-m-p A-s-s” and my browser helpfully fills in the rest. Nobody told my laptop it can’t think that way. My dreadful topic is the first suggestion Google offers.

Hello, NSA. You must be very busy. I’m just a depressed liberal. Move along, nothing to see here.

HIV activists have fought presidents before. We protested while carrying urns filled with ashes. We had motivation and grief and outrage. We believed we could change the world and we did. We actually did.

I was a young man then. I have been glancing at those years in the rearview mirror ever since. I write about them often. It hadn’t occurred to me that we could face that level of ignorance and danger again in my lifetime. And trust me on this, the policies and positions of our new administration, on everything from LGBT rights to HIV education, will have a direct impact on the number of urns to be filled in years to come.

The past may be prologue, but that analogy doesn’t satisfy me. Our past is a monster we had beaten down. But then it faded behind us, beyond reach, and somewhere back there it grew strong and fearsome and has now leapt over us to become our immediate future.

My horror imagery comes from my dreams. I work hard not to think of these things, at least during my waking hours. I’ve turned away from television news, angrily, like a lover who bitterly betrayed me. But at night it can’t be helped.

Our new president is smirking at his inauguration. He is waving to all of those he has so cynically duped, and surrounding him are white men sneering so broadly they look reptilian. Our outgoing president and his wife are enduring the event bravely, but their very presence among this grotesquerie is so out of time their image might as well be a weathered tintype.

I wake up. It is another morning in America, and I struggle to decide whether or not to surrender myself to sleep again. I honestly cannot decipher the better of the two.