The Battle for the Soul of AIDS

Previous Next
The Battle for the Soul of AIDS

I used to get saved at the drop of a hat. I loved the pageantry of church youth revivals, the thrill of coming forward to give my life to Christ, and that tingly feeling of being part of something greater than myself, of feeling truly blessed. Of being forgiven.

The “forgiven” part meant a lot to this boy, growing up gay in Bossier City, Louisiana. 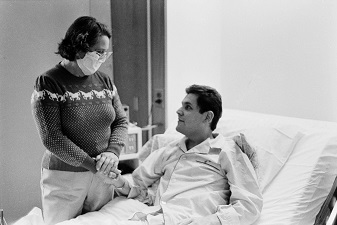 The church seemed like the cure for what ailed me. My shame over my sexuality was washed away with each baptism, and trust me, my brothers and sisters, there were many. For youth revivals and baptisms, Louisiana was a big circuit.  It was a rinse and repeat ritual that I sought out on a regular basis as a way to correct the vexing thoughts and deeds of my overactive teenage libido.

I remember telling my parents I was going to band practice just to slip away to my latest baptism obligation. I reveled in the full body dunking and then retreated to the dressing area and watched, transfixed, as the other male celebrants changed out of their soaked underwear. My yearning made me wonder if I should step back into the baptismal fount for another dip.

I don’t get baptized anymore. I abandoned the habit long before moving to Los Angeles in my early twenties, just as AIDS began its murderous march through my West Hollywood neighborhood. Not only had religion dismissed me personally, it was clearly unequipped to handle the throngs of dying  and disfigured gay men who suffered from the new plague.

In many respects the church became the enemy. Activists getting the word out about HIV transmission and safer sex clashed head-on with religious groups unwilling to discuss sexuality or condoms. The opposing views became a battle for the soul of AIDS.

In Body Counts, the personal chronicle by Sean Strub of AIDS politics and survival, Sean recounts in moving detail a 1985 ACT UP protest at St. Patrick’s Cathedral in New York City. Raised in the faith, Sean struggles with memories of his upbringing while his fellow protesters shout, throw condoms and decry the Catholic resistance to the basics of HIV prevention. Sean emotionally receives communion before announcing to the priest offering the wafer, “May the Lord bless the man I love, who died a year ago this week.”

Cardinal John O’Connor, who led the mass, met the chaos with an opportunistic cynicism. “He sits with his head in his hands, melodramatically trying to convey spiritual pain,” Sean writes. “Photographs of the media-savvy cardinal looking tragically besieged will elicit overwhelming sympathy when they appear on the front page of Monday’s newspaper.”

“The church failed,” says Rev. Chris Glaser, a longtime Presbyterian gay activist and writer, about the AIDS response from organized religion. “There were exceptions, and eventually the church remembered how Jesus would have responded.” (One of those exceptions would have to be Mother Teresa, who opened her first AIDS hospice in New York City in 1985. Her reference to  the homeless, “This is Christ in distressing disguise,” has obvious applications to people living with AIDS.)

Gay men filled the spiritual vacuum with alternatives. Metaphysics became popular in the crisis years, as well as the teachings of spiritualists like popular author Louise Hay. At “Hayride” events throughout the mid-1980’s, the West Hollywood community auditorium was stuffed tighter than a Cher concert with gay men, most of them sick and all of them hungry for the grace of Hay’s simple message: “You are loved.”

The personal price of religion’s failed ministry can be measured in children cast out from families and lonely deaths and assurances of eternal damnation.

In the documentary Memories of a Penitent Heart, filmmaker Cecilia Aldarondo unwraps the mystery of her gay uncle, Miguel Dieppa, who died of AIDS in 1987. Miguel supposedly repented of his homosexuality on his deathbed, leaving behind a live-in partner who was kept from the funeral, a devout Catholic mother, and a lot of troubling rumors.

The film charts Cecilia’s investigation into this unresolved past, taking an abrupt turn when Miguel’s partner suddenly reappears after two years of dead ends — as a Franciscan monk living in Pasadena. He had waited 25 years to tell his version of the story.

“Religion is under-explored in the narrative of AIDS,” Cecilia told me. “Although it has been a very strong current running through the crisis, and a lot more common than we have discussed in our culture. These issues are still with us today.”

“This is not a film that tries to demonize my grandmother,” she said, in reference to the religious sway Miguel’s mother may have held over her son during his dying process. “She was acting out of fear, not out of hatred. What I think is possible is that Miguel really loved his mother and (offered his repentance) to her as a gift. I also think he was a practicing Christian, and that it mattered to him.”

The film’s themes bring up a lot of unresolved anger and grief for me. So many people and institutions failed us when we needed them, most ironically the ones that purport to bring comfort and aid.

“I hope the film helps us have a different conversation with each other,” Celilia said. “Whether it’s about the past or the present.”

“There are a lot of wounds that have to heal,” she added thoughtfully, as someone who had weathered the damage in her own family. “Wounds on both sides.”

(Pictured above: Miguel Dieppa and his mother, 1985.