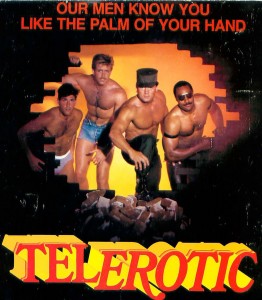 During my years in Los Angeles in the 1980’s, I owned and operated Telerotic, a gay men’s “phone fantasy” company.

This was long before Grindr or Manhunt, or even the automated phone lines of the 90’s.  Instead, men called an 800 number and used a credit card to spend $40 on the man of their dreams, who would call them back after the charge was approved.

As a struggling young actor, I had begun this odd vocation by working for an outfit as one of their “fantasy callers.” The company called me at home with the name and number of the customer and his fantasy man description, and I would assume the desired character and call him back.

My job was to sound credible in roles ranging from cocky Venice Beach bodybuilder to volunteer firefighter to leather daddy, and manipulate the customer toward the prime objective within the typical call duration of thirteen minutes. It helped if I could convince him that our connection was mutually mind-blowing to help ensure he would call again.

As it turns out, I had a way with words. After a few months learning the ropes I struck out on my own, and Telerotic was born.

Over the years of my vocation I spoke to thousands of men. Some of them faithfully requested me every week, uttering secrets to me they had never spoken aloud before. It was amazing insight into the realm of fantasy, loneliness and desire. It was also, quite literally, a social anthropologist’s wet dream. 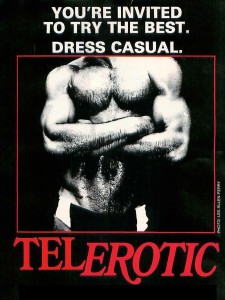 My customers were usually trapped in a life without a gay outlet. Some of them were in a straight marriage, but most of them lived in small towns and were helpless to locate male companionship. (Remember, this was the early 1980’s, which compared to the LGBT advances of today might as well have been the Old West).

Their desires were not so bizarre that they they had to resort to phone sex to speak of them. Their requests were simple and almost touchingly mundane. Touch me there. Let me tell you what I think about. Watch me do this.

They wanted something bigger, more masculine, and better hung than themselves because it was their way of asking to be taken care of, to be released of their own worries and responsibilities and turn over the driving to someone else. Any of us can recognize that need, and the loving act we perform when we provide it to our partner. 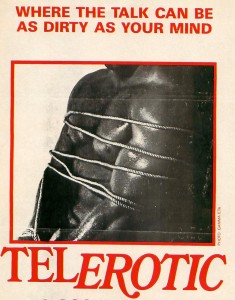 Our chats were a lifeline to many of my regular customers. For those who didn’t abruptly hang up after the sex talk had reached its conclusion, our pillow talk afterwards sometimes featured their achingly honest hopes and dreams. They would recount their loves lost or found, the pain of isolation and their dreams of having a life with the right man someday.

Occasionally their patronage would end after news of a potential boyfriend — or resume when it didn’t work out. Sometimes our calls ran long, as I gently led a faceless, suffering voice away from unexpected grief or embarrassed tears.

Truly revealing myself, however, was an occupational hazard I never risked. I held tight to the gravelly voice I maintained for our calls. I only responded as my adopted character might. Every orgasm of mine with a phone customer was earth shuddering, passionate, and entirely faked. No matter what intimacies they had the courage to share about themselves, they got nothing of the kind in return, whether they knew it or not. I simply wouldn’t compromise my fantasy persona to admit I was actually a skinny redhead trying to make a buck in Hollywood.

As the AIDS headlines during that time increased, so did business. And at long last, something jolted me from my shallow priorities of phone sex profits.

I’d had enough of the charade. It was wearing on me, being taken into the confidence of all of these men and giving them bullshit in return. What was the satisfaction, much less the pride, in representing a bogus sexual ideal for the sake of my continued prosperity, in being an incredibly convincing lie?

Soon enough, I could no longer reconcile the dream world my phone calls inhabited with the encroaching nightmare of the very real AIDS crisis. 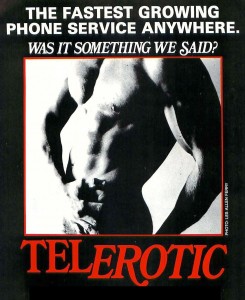 Maybe the end came when a customer, in the midst of our graphic call, helpfully offered to get a condom from the drawer so I could put it on. AIDS had permeated his psyche so completely it had pierced his very fantasies. His presence of mind to protect himself — and by extension me, the phone whore on the other end of the line — was a bittersweet gesture so filled with grace, and so steeped in the realities of the new epidemic, that it stopped me in my tracks and broke my cynical heart.

It wasn’t long before I sold the company and ended my stint as a sexual entrepreneur. For a while I entertained friends with the most unusual sexual idiosyncracies that had once been shared with me by voices on the phone. But that exercise didn’t feel comfortable for very long. It felt like betrayal.

Today, what I remember most is the sound of men chasing a glancing, counterfeit intimacy because it was all life would afford them, and hearing their desire for something lasting in life and their doubts about finding it.

And I am haunted, deeply and forever, by the sound of profound longing in their voices.

(This period of my life is covered in more detail in my book, A Place Like This.)