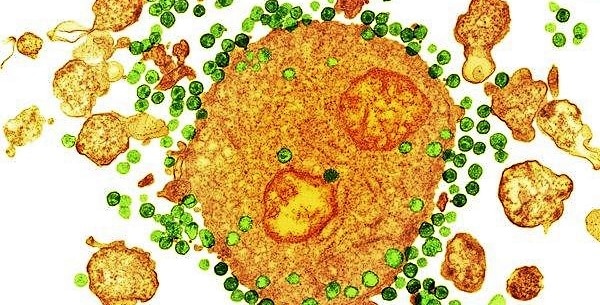 (This nuanced press release from Treatment Action Group addresses the “another person cured of AIDS” story far better that I ever could. — Mark)

A key caution is that HIV could yet rebound, and hence the researchers are appropriately using the term remission, rather than claiming a cure has been achieved. Another important point of emphasis is that, as with Brown, the case involved the risky procedure of stem cell transplantation, which was required for a life-threatening cancer diagnosis (refractory Hodgkin’s Lymphoma) – this is not a treatment appropriate for people with HIV who do not have cancer. The hope is that lessons can be learned to help develop more widely applicable therapeutic approaches for attaining HIV remissions or cures.

Ravindra K. Gupta from University College London (UCL) will describe the new case in a presentation at the Conference on Retroviruses and Opportunistic Infections (CROI) tomorrow, and a paper is due to be published in the journal Nature [1] (an embargo that was in place was breached today, hence the emergence of the news ahead of the presentation and publication).

Like Brown, the individual concerned received a stem cell transplant from a donor whose cells lack expression of CCR5, a receptor used by most HIV strains to infect its primary target, CD4 T cells (the technical terminology is that the donor is homozygous for the CCR5Δ32 mutation).

After the transplant procedure, HIV became undetectable by multiple measures, and permission was granted to interrupt antiretroviral therapy (ART). The individual has now been off ART for 18 months with no sign of HIV rebound to date. Regular monitoring will be required to assess if this salutary outcome is maintained. Timothy Ray Brown recently reached the milestone of 12 years off ART without any sign of a return of HIV.

There are some differences between the treatments applied in the new case and those administered to Timothy Ray Brown, which may help shed light on the mechanisms contributing to their outcomes. Specifically, the individual reported on by the UCL group this week did not undergo total body irradiation, and received only one stem cell transplant compared to Brown’s two. Furthermore, post-transplant graft-versus-host disease (GVHD) was less severe than that experienced by Brown, and was limited to the gut.

In addition to Gupta’s report, a late-breaking poster from Guido Kobbe and colleagues about another person with HIV and cancer who received a stem cell transplant from a donor homozygous for the CCR5Δ32 mutation will be presented at CROI on Wednesday. Results obtained during the period after transplantation were originally presented at CROI in 2016,[2] but ART was only recently interrupted and the individual has been followed for approximately 3.5 months without showing evidence of HIV rebound.

Both Gupta’s and Kobbe’s research are part of a larger collaborative effort to assess whether Timothy Ray Brown’s HIV cure can be repeated in others. The consortium, called IciStem, is supported by amfAR. Today’s news provides compelling justification for their work.

Notably, this apparent success comes after a number of instances in which stem cell transplants from donors homozygous for the CCR5Δ32 mutation failed to provide the hoped-for benefit. In several other cases that have previously been reported, recipients died, either because of complications from the procedure (graft-versus-host disease) or the underlying cancer. In one case, the emergence of HIV able to use an alternate receptor to infect cells (CXCR4) was documented.[3]

TAG supports continued and expanded investment in HIV cure research. Discovering a safe, broadly effective, accessible and scalable cure is a daunting challenge, but such a cure will be an essential component of efforts to bring a permanent end to the HIV epidemic. The successful development of highly effective treatment and prevention options has allowed for planning to end HIV in epidemiological terms, but we must not lose sight of the fact that, for people living with HIV, the end will only come with a cure.

For a listing of clinical research related to the effort to develop an HIV cure, including stem cell transplantation studies for people with cancer, see TAG’s Research Toward a Cure webpage: http://www.treatmentactiongroup.org/cure/trials