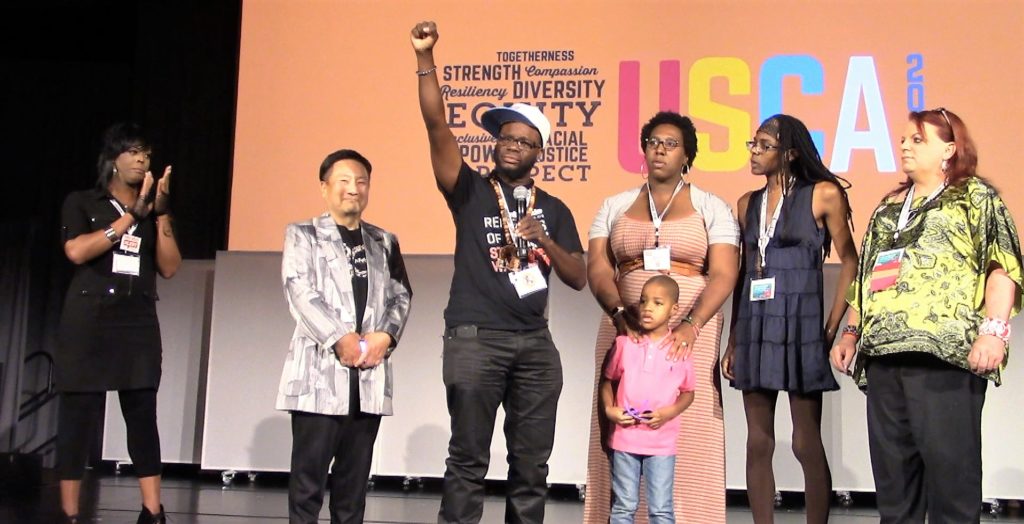 The United States Conference on AIDS (USCA), celebrating thirty years of teaching practical skills to HIV service providers, found itself the target of old-school activism on Friday when transgender activists stopped the plenary program to voice their frustrations about being underrepresented by the organizations in attendance and by the conference itself.

Paul Kawata, the famously affable director of the National Minority AIDS Project (NMAC), which produces the conference, invited protesters onto the stage once it became clear the small group of vocal activists were not going to leave the foot of the stage. Achim Howard, a trans activist, engaged in an extended and passionate rebuke of the erasure of trans people and of a public health system that often does not recognize their existence. He was followed by four other activists, one with a small son in tow who was playfully unaware of the dramatic proceedings.

Kawata stood patiently and supportively beside the five activists, each of whom riveted the crowd of several thousand delegates with deeply personal stories and pleas to recognize, serve, and employ trans people. As the minutes passed, however, and as the precisely timed USCA program became further delayed, Kawata became visibly eager to get NMAC’s largest annual event back on track.

Watch the protest in its entirety here:

Protests have been a staple of HIV/AIDS gatherings since the epidemic began and USCA has an intriguingly progressive policy toward them. Groups interested in staging a protest, or “action,” are asked to submit their request in advance in order for time in the program to be made available to them. NMAC generally supports such activities and Kawata often joins these groups onstage during their action.

This protest was of a more organic nature, and clearly not a previously approved action. However spontaneous the protest may have been, the five speakers riveted the delegation with their deeply personal stories, sometimes tearfully explaining to the crowd the crushing difficulty of fighting for acceptance within the HIV community.

The activists schooled this conference, pure and simple. Congratulations all around: to the advocates with the courage to act up, and to Paul Kawata and NMAC for embracing activism and those who believe they have no other choice but to disrupt.

Watch the video. I guarantee you will learn something.