Previous Next
Adam Saleh: Exposing Racism for Fun and Profit 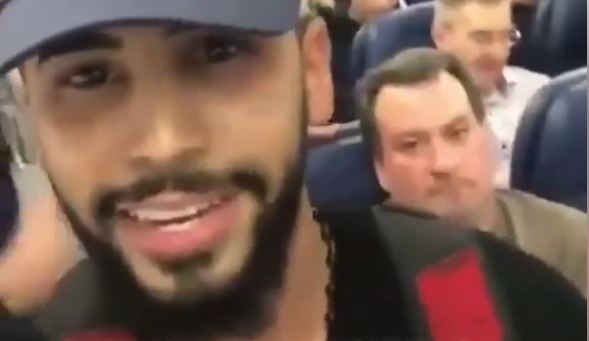 The video is dramatic and infuriating. A young Arab man is seen speaking frantically to the camera as he is being asked to leave a plane. In the video, he explains he was simply talking to his mother on his phone, and his use of Arabic upset other passengers so much he was taken off the flight.

The incident dovetails perfectly with what is enraging every responsible social activist in this country right now: the degradation of Arabs and every other racial, ethnic, and sexual minority one could name.

Except YouTube star Adam Saleh is a tainted messenger, known for creating viral pranks that include a list of videos on airplanes that have been presented as the real thing. He posted a video purportedly showing himself being smuggled on a flight inside a suitcase, until it was exposed as a fraud. Of greater concern was his video post showing him being racially profiled by a cop, that is, until it too was exposed as fraudulent and he amended his video description to say it was a “dramatic reenactment.”

There’s a word for eliciting bad behavior from others by manufacturing a false scenario: entrapment. And some of those who would oppose this strategy on the part of law enforcement, for instance, have no problem with Saleh’s contrived incident. It’s a curious disconnect.

But wait, the reaction of the passengers during Saleh’s interrupted flight plans was authentic, and that makes this all okay, or at least that’s the argument from well-meaning people who are clinging to Saleh’s documentation of onboard racism. But with racism being exposed organically – vicious outbursts have been filmed by bystanders everywhere from fast food joints to checkout lines — do we really need Saleh’s cynical set pieces? This isn’t social activism. It’s self-promotion to increase his fan base of YouTube followers. And I believe we now refer to this sport of thing as #FakeNews.

Whatever Saleh’s intention may have been, he has poisoned the well. Interestingly, Saleh doesn’t include in his video whatever precipitated his removal from the plane, and Delta’s own initial interviews of those onboard suggests Saleh was being disruptive prior to the events in the video. At least one passenger now disputes he was ever speaking Arabic on the phone at all. (UPDATE: Several more passengers have now come forward to dispute Saleh’s story.)

Something here just isn’t right. It could have an effect on the integrity of our social conscience, and it needs to be called out.

Saleh is the court jester of our Trump anxiety, gleefully racking up YouTube views under the cloak of our righteous offense. We can’t look past the troubling, apathetic faces of the Delta passengers long enough to see we have been played.

Meanwhile, the clicks to Saleh’s infuriating video aboard the Delta airlines flight keep right on climbing. Whatever your reaction to this latest viral outrage may be, one thing is clear. Adam Saleh’s exploitation of our deserved indignation has been really good for business. His, anyway.

If we accept this Theater of Indignation, then maybe I have been going about decades of exposing HIV stigma all wrong. Perhaps I should march down to WalMart and begin shouting “I AM HIV POSITIVE!” as loudly as possible. Once I get the attention of my fellow shoppers or, if I’m lucky, the wrath of some ignorant dupe, all I have to do is turn on the camera and document their disdain for me. If their reactions are “real,” then I am absolved of my tactics, right?

Besides, it could make me a YouTube star and make me famous as a humble, courageous victim exposing HIV stigma for all to see.

Nice work if you can get it.