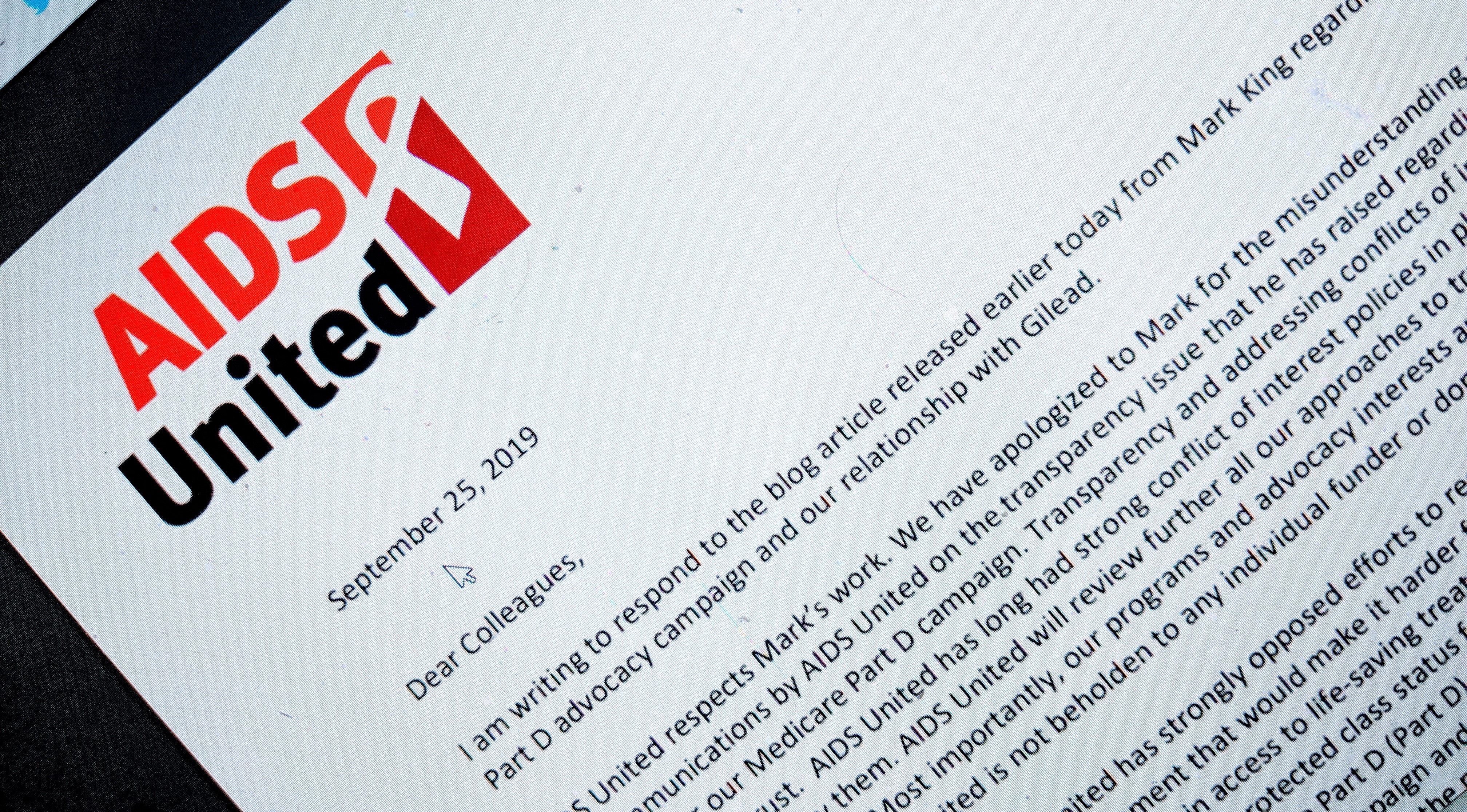 AIDS United, the national HIV/AIDS policy, lobbying, and funding consortium of organizational leaders, has issued an apology and promised to review their policies and procedures after the posting of my (can I say bombshell? Humble bloggers never get to use that word, so please) article last week, “Gilead Duped Me into Being Their Mouthpiece. Here’s How.”

That blog post detailed my involvement in a media outreach project, led by AIDS United and managed by public relations firm Precision Strategies, that was ostensibly to fight a proposed change to Medicare Part D. The printed editorial piece that resulted, however, featured key messages for Gilead Sciences and referenced a study they funded. As it turned out, Precision Strategies worked for Gilead, not AIDS United.

None of these facts about Gilead’s involvement were disclosed to me by Precision Strategies or AIDS United. In my blog post, I disavowed the editorial and apologized for not doing my homework more carefully.

Within hours of my blog going live, AIDS United held an emergency Board call about the controversy. By the end of the day, AIDS United had issued a public letter that apologizes to me and signals changes to come.

We understand and take seriously the trust the community has placed in AIDS United to represent its best interests. AIDS United’s Public Policy Council (PPC) meets next week, and the 55 member organizations of the PPC will address the transparency and advocacy issues raised by this article. A bigger community discussion is emerging and may occur at the upcoming Biomedical HIV Prevention Summit and in other spaces. AIDS United will participate in those conversations.

First, credit where credit is due. AIDS United was responsive to my post. That is commendable, as is the swiftness of their initial response. They apologized to me and promised to further this conversation, including their attendance at a proposed session at the upcoming BioMedical Summit about pharma funding ethics, to be led by advocates from Treatment Action Group and Housing Works.

Well, to be picky about it, AIDS United was responsive to half of my post. The half about how no one disclosed Gilead’s involvement in every aspect of the editorial project. For that, AIDS United promises to be more transparent in the future.

Then there’s the other half of my post, which outlines the laundry list of misdeeds by Gilead that directly impact the health and lives of people living with HIV. On those topics, AIDS United remains frustratingly silent. They appear constitutionally incapable of criticizing one of their largest donors, a donor with a seat on their Board, even in the face of so much wrongdoing. It makes you wonder if their statement above, “AIDS United is not beholden to any individual funder or donor no matter how large…” rings true.

AIDS United does offer a glimmer of hope about that. Their letter assures us that their Public Policy Council (PPC), which is meeting this week, “will address the transparency and advocacy issues raised by this article.”

Well that certainly sounds promising. Will the PPC discuss and issue a public statement about Gilead withholding new drug formulations when they knew their old one was causing side effects, just to extend their profits? Will the PPC remark on the congressional hearings about the high cost of Truvada as PrEP, and how Gilead could single-handedly curb the epidemic by making Truvada and Descovy more affordable? Will the PPC come out in support of the anti-trust lawsuit that accuses Gilead of participating in a documented price-fixing scheme that has kept their HIV medications as expensive as possible for as long as possible?

My post touched a nerve and was widely read because, I believe, the concern over the undue influence of Big Pharma on our programs and policies has become especially acute lately. My article involved AIDS United, but there were some very nervous readers from other leading HIV/AIDS organizations who know good and well that this could have been about them. Gilead, the largest benefactor in the HIV/AIDS arena, has engaged in some horrifying conduct while our own HIV/AIDS leadership has remained largely silent.

None of this should suggest that I oppose pharma funding. I don’t. Our most important programs and agencies would not survive without it. But we can walk and eschew greed at the same time.

I look forward to the outcome of AIDS United’s policy meeting this week. You’ll hear about it.

p.s. Your responses to me personally about my original article are deeply appreciated. Yes, telling the truth and apologizing when needed feels great. I highly recommend it! My piece also inspired at least one further opinion piece, Sam Avrett’s article on TheBody.com, “HIV Organizations and Workers Should Routinely Disclose Ties to Pharma Industry.”