AIDS2018: The Complete Video Collection from My Fabulous Disease

Previous Next
AIDS2018: The Complete Video Collection from My Fabulous Disease 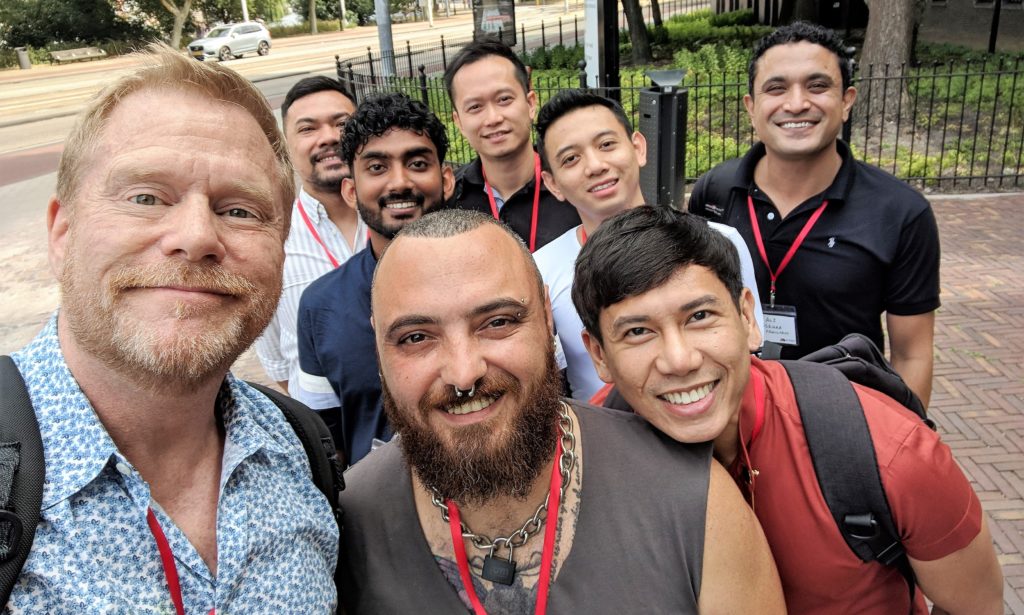 Attendees at the “OUT WITH IT” pre-conference of AIDS2018 in Amsterdam.

One of the great joys of my HIV/AIDS writing and video blogging over the years has been capturing the sights, sounds, and incredible people of the International AIDS Society’s (IAS) biannual conference. I’ve spent sleepless nights in hotel rooms everywhere from Vienna to Durban, furiously editing video footage shot during the day and getting it posted each morning.

Such was the case with AIDS2018 in Amsterdam. My co-producer Theo Tsipiras (a welcome addition to my work beginning in Melbourne in 2014) and I produced nine video reports and three Facebook Lives during the week — more content than I have produced at any previous IAS conference. I’m not complaining. I’m far too inspired and humbled by the people featured in these videos to feel anything but gratitude.

I must express my admiration for my sponsor MPACT (Global Action for Gay Men’s Health and Rights). Their entire team has been amazing. They requested that I focus my lens on “sex positive stories about gay and bisexual men,” and you will certainly see that reflected in the videos below. And this coverage would never have reached such a broad audience without my media partners TheBody and Queerty.

Out With It: Gay Men from Around the Globe Reflect on Life Back Home

Several hundred gay and bisexual men attended a pre-conference before the official opening of AIDS2018. The full-day session, titled Out With It, was sponsored by MPACT and designed to showcase innovative, community-led solutions for gay and bisexual men working across the globe. What fascinated me most, though, was the wide variety of experiences of the attendees when it comes to living their lives as gay men back home. In my first video report, I learned what gay life is really like for men around the globe. Some of their answers might surprise you.

Now we’re talking (and yelling, and protesting)! The most thrilling moments at the International AIDS Conference often take place outside the conference hall and in the streets. This year at AIDS2018 is no exception. On the first day of the conference, activists streamed through the streets to loudly — and often quite colorfully — advocate for an array of issues that, in large part, have been championed directly by communities of people living with HIV.

“U=U,” or “undetectable equals untransmittable,” is a new and rousing rallying cry for people with HIV, and the campaign was front and center throughout much of the march as it wound its way through the narrow streets and canals of Amsterdam.

For gay sex worker and advocate Lyle Muns, his profession helped him examine his sexuality and create healthy boundaries. He is licensed in Amsterdam — where he pays taxes on his business and is a member of the Chamber of Commerce — and has taken every opportunity to educate his clients about HIV. Since Lyle is living with HIV himself, that education often includes lessons on what it means to have an undetectable viral load, including messaging around U=U (undetectable equals untransmittable).

A Guided Tour of Club Church, a Gay Sex Venue in Amsterdam

Amsterdam has a reputation as a welcoming home to all manner of sexual tastes, so I could not resist paying a visit to the city’s most infamous gay sex venue, Club Church, for a personal tour of most every dark nook and cranny — yes, right here in my video report! — and an extremely candid conversation with manager Anne Rodermond.

Rodermond’s point of view will either have you applauding his approach or gasping in concerned indignation. He doesn’t shy away from discussing the preferences of his customers and his responsibility as the club manager.

Are There HIV Prevention Advantages to the Leather Fetish Scene?

Self-described “Amsterdam Kinkster” Chris Vincent explains how his newfound love of leather and fetish sex has actually provided him more safety from HIV transmission. As it turns out, our largest sexual organ is, in fact, between our ears.

As a sexually transmitted infection, hepatitis C occurs primarily in gay men. That fact spurred gay health activists in Amsterdam to bring local businesses and sex venues together to create a plan to wipe out new infections in their community.

The “NoMoreC” campaign is sponsored in part by Sauna NZ, a gay bathhouse in Amsterdam established by the same folks behind the gay sex venue Club Church (which is featured in two of my earlier videos), so it seemed only appropriate that I spend some time at Sauna NZ to discuss the campaign with the sauna manager and some of the campaign’s supporters.

David Furnish, Chair of the Elton John AIDS Foundation, on PrEP, U=U, and the Looming Controversy Over AIDS2020

David Furnish, the elegant Chairman of the Elton John AIDS Foundation and husband to Sir Elton John, spoke to me at AIDS2018 to discuss how the Foundation has changed the landscape of HIV services around the world. He also weighs in on PrEP, U equals U, the importance of younger activists understanding their HIV/AIDS history – and the controversy over whether or not AIDS2020 should be held in the United States, considering it is a country that is increasingly inhospitable to those most affected by HIV/AIDS.

In this, my final video report from Amsterdam, I review the week and the stories that captured my imagination, and take a look forward to 2020 and the controversy about its scheduled location in San Francisco. My thanks to Romeo, a gay men’s online community, for allowing me to sneak onto the balcony of their Amsterdam headquarters to film this segment.

As my jetlag wears off and I return to life back here in the States, I feel nothing but gratitude for this opportunity, and a deep humility for my privileged place in the global community of those living with HIV. Thank you for following this coverage, and for your supportive comments and virtual hugs.

And as always my friends, please be well.