REVIEW: Broadway’s ‘The Boys in the Band’ has Stars but No Wattage

Previous Next
REVIEW: Broadway’s ‘The Boys in the Band’ has Stars but No Wattage 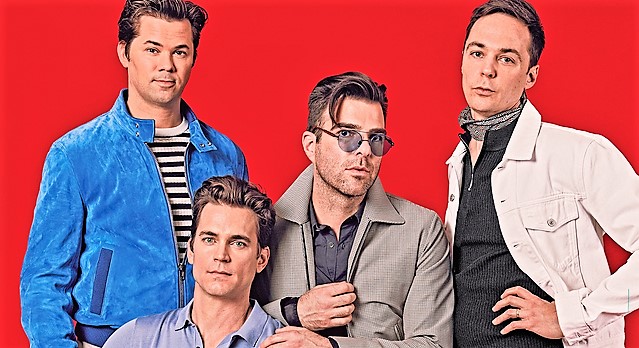 Most of playwright Mart Crowley’s bitchy zingers hit their target in the first-ever Broadway production of his 1968 play, The Boys in the Band, that much should be noted. The starry cast, composed of nearly every prominent openly gay actor working today, made sure of that during a recent preview performance I attended ahead of the May 31st opening.

But somewhere, maybe thirty minutes or so into the uninterrupted two-hour descent into homosexual self-hatred, after the cavalcade of stars had each paused for applause upon making their entrance, this audience member surveyed the proceedings and couldn’t help but begin to question why.

Why does this production exist? Does it hold any immediacy for a contemporary audience? Is there a need, today, for the boys in this band to pay us a visit?

The answer? Eh. Not really.

The monumental significance of the original, off-Broadway production — and the subsequent 1970 film that employed the theatrical cast – hangs heavily over anyone who knows their theater or LGBTQ history. As I have written (“Why Are We Still Haunted by The Boys in the Band?”), the original film is a fascinating time capsule because it lays claim to an authenticity that will never be achieved again. The original actors, many of whom were gay, portrayed their gay archetypes in real time, at precisely the same moment as Stonewall was erupting — and a decade before AIDS arrived (most of that cast, in fact, would die from the coming plague in the ensuing years).

Given that lineage, the attractive new cast can only approximate their forebears and, as much as I was intrigued, okay, giddy even, at the prospects of this latest uber gay stunt from producer Ryan Murphy, there just isn’t much there there beyond the fashionable casting.

Jim Parsons, a gifted comedic actor who brought delicacy and pathos to his role in HBO’s production of The Normal Heart, taps into the outer reaches of his talent and comes up short. As Michael, the host of the birthday party that brings our characters together, Parsons must convince us he has such a sadistic hold on his friends that they remain trapped in his apartment despite his drunken insults and cruel mind games. His performance never achieves that level of dominance.

Zachary Quinto may have an even tougher job as the birthday celebrant, Harold, the only person who can outfox and properly humiliate Michael. Quinto reduces his characterization to a droning vocal affectation; it hits the right notes of sarcasm but leaves the actor nowhere else to go. It doesn’t help matters that the late, great actor Leonard Frey, the original Harold, will forever be seared into the memory of any queen of a certain age as the ultimate representation of arch villainy.

The remaining cast members, familiar faces all, dutifully take advantage of their comedic and melodramatic moments. Tony Award-winning director Joe Mantello doesn’t appear interested in finding something contemporary to say, beyond the same “gay men drink a lot, fuck a lot, and hate themselves” message the play outlined 50 years ago.

I suppose the realization that LGBT people continue to have twice the levels of alcoholism and depression as the general population might be a takeaway from this production, but there’s nothing to suggest that this production has anything deliberate on its mind. It just sits there, brimming with mean, biting humor while offering an emotionally removed facsimile of a particular place and time. As a gay dinner party entree, it might be called Unpleasant Under Glass.

There is a startling moment, early in the play, when a character mentions that his physician had cancelled their appointment. “I think he has some kind of virus,” he says casually. “He looked just horrible.” It took my breath away and had me curious if the production might explore the changes – some might say mortal consequences – brought on by the promiscuity the play revels in. Nope.

At 110 minutes running time, the play feels longer, especially once the interminable sadism of the “phone game” begins, an extended final sequence that allows our characters to reveal themselves as either more empathetic or more pathetic than they already are.

During lulls, I found myself admiring David Zinn’s set, an entire apartment – floors, walls, furniture – carpeted in blood red. It suggests the existential inferno in which these men are trapped.

I know just how they felt.

(The Boys in the Band is playing at the Booth Theater in New York City. The official opening is May 31st – this review is based on a preview performance – and it closes on August 12th. Check here for ticket information.)