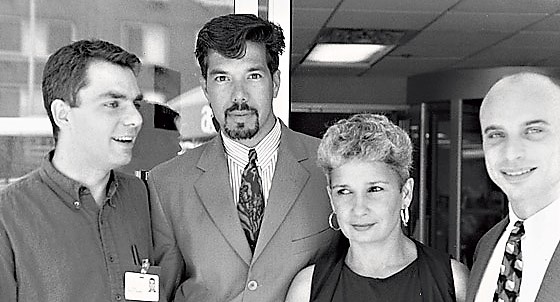 Torres, second from left, with St Vincent’s staff in 1992.

The article appeared in New York Magazine in 2008. I remember it quite distinctly. Titled “Another AIDS Casualty” and written by David France, the profile of once-famous New York AIDS physician Dr. Ramon “Gabriel” Torres was a heart-wrenching read.

The story outlined a horrifying downward spiral brought on by Torres’ meth addiction, a habit he had picked up in the mid-1990s just as new HIV medications were calming the mortal tidal waves that Torres had been fighting for years in his role as director of AIDS programs at St Vincent’s Medical Center in New York City. Torres fell from a high perch, having become well known, heralded in fact, for his work with marginalized populations dealing with HIV.

Torres’ ravenous addiction stole his career, his homes, his relationships and his reputation, all within a few years. Before finally being sent to prison on drug charges in 2014, Torres had been reduced, in a final tragic irony, to living in housing provided by a city program for homeless people living with HIV.

The 2008 profile of Gabriel Torres made such an impression on me because I was an active crystal meth addict at the time. I recognized in Torres my own plight and that of others – activists, doctors, community leaders – who had fought hard against one epidemic only to be swept up in a new one.

So, it is with great relief that I can report that Gabriel Torres is alive and doing well, having been released from prison in November 2017. He has been writing about his experiences for TheBody.com and working as a research assistant on a clinical drug trial for a medication that might help addicts with drug cravings.

Torres was gracious enough to speak with me about his difficult past and his hopeful, humble life today. Here is our conversation.

Mark: First of all, I’m so glad you’re alive. I mean that literally, considering.

I also want to thank you for your role in saving lives during the darkest of the plague years, working at St Vincent’s in NYC with marginalized populations who were dying in droves. Do you think about that time very often?

I actually do even though it was decades ago and so many things have changed. I still encounter surviving patients of mine from back in the day.

That must be amazing, to see who survived.

Yes, thankfully, even a few that were in the original monotherapy trials happened to pull through.

I remember running into people during those early years, like seeing someone at the grocery store who you hadn’t seen in a few months and breathing this sigh of relief. Thank God, they’re alive.

Since I’ve been released I’ve gotten news of several people who have died that I didn’t even know were sick.

Let me applaud you a little more before we move on. Your HIV/AIDS research into marginalized populations was leading the way during the 1980s and beyond. Oh, and you were impossibly young and gay and drop dead gorgeous. Ah, our distant youth.

Thanks for the compliments but I feel very old these days. I will be turning 60 by the latter part of this year.

Do you see time differently, having spent three years incarcerated?

I do. Having been locked up for 38 months made me appreciate my freedom, my health, family and friends, and helped me re-establish my connection to my Higher Power. The changes that I’ve observed even in the relatively short hiatus of my absence are jaw dropping.

The streets of your old neighborhood, that sort of thing?

Everything. The dispersion of old friends, colleagues, co-workers away from the city or away from their old institutions, jobs and agencies.

Do you mind if we revisit some of your “wreckage years” for a moment?

It’s strange talking to you like this, because David France’s 2008 piece about you freaked me out so much. I was in my own active addiction during that time.

After that story I had a period of relative abstinence, but I relapsed and unfortunately fell prey to a dealer that set me up in an entrapment that led to my arrests.

The piece describes a very sad, crumbling human being. I don’t mean to embarrass you by saying that. I say it because I saw myself in it.

Well, it got even worse after that.

The addicts among us who get caught and go to jail and those who don’t, well, it’s damn arbitrary.

I know. I went through a great deal of soul searching after a period of self-pitying but have come to terms with everything that happened. It’s amazing, from what I hear some of the same drug dealers are still active, but most eventually suffered consequences.

Gabriel Torres at a 1996 party in Greece.

I don’t believe it’s any accident that your drug abuse – and mine, and that of so many people we know – really took hold in 1996, when new HIV medications began saving lives and we all took a collective breath. I felt entitled to the circuit parties and the drugs.

Yes. It felt liberating at the time. Somehow, it allowed us to experience a new freedom after the long toll of repression. It also made me even less cognizant of the repercussions that continued use could have on my life. It numbed me to the risks that I was taking.

Re-reading France’s profile of you, I was stunned to see (famous HIV treatment activist) Spencer Cox quoted. He was saying what a problem drugs had become for AIDS survivors and providers. Within four years, of course, Spencer himself would be dead, at least in part due to his own drug addiction.

I actually didn’t know he was using meth. I found out about Spencer’s death while reading How to Survive a Plague, the book by David France, while in prison.

I still have a hard time forgiving myself for my addiction. How could I survive AIDS, and promise myself I would live in honor of my friends who died, only to stick needles in my arm? It’s baffling to me, still.

Forgiveness has been a long process. But I have to, to move on. The only way I can make amends with myself and others is by maintaining my sobriety and helping others that are still struggling. 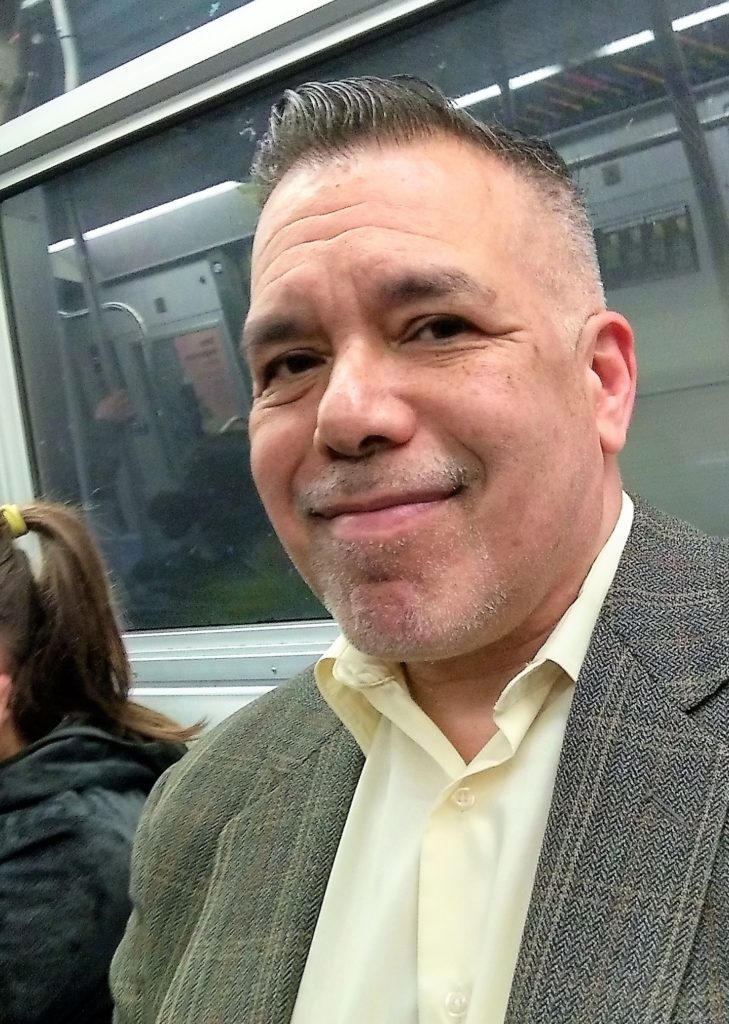 How is sobriety going? Has it been tough?

I’m enjoying my sober life thoroughly. I’ve made reconnections with my family members who I had neglected in the past and have a cadre of new and old sober friends that have my best interests at heart.

As you’ve probably noticed, meth addiction among gay men is as bad, maybe worse, than it was three years ago.

Yes. Meth continues to intercalate itself in our sexual lives, destroying and undermining our personal relationships. I believe we as gay men can and are slowly pulling through it. Those of us that have somehow survived the meth epidemic can help serve as role models and help those that are still struggling and prevent those that have never tried it from ever experimenting in with it.

And it’s been seeping into LGBT communities of color.

Yes, this has recently been recognized and it’s going to take members of the black gay male community to develop strategies to combat this drug from decimating their community. Already there has been some recognition of the problem by film makers such as Michael Rice (Partyboi) and the ACT UP meth working group in NYC is seeking funds to conduct forums and draw attention to the problem.

Partyboi Trailer, above. (TRIGGER WARNING, EXPLICIT DEPICTION OF DRUG USE.)

My routine is split between work, sharing time with friends and family members, my dog Neo, and completing a memoir I started when I was in Federal prison. I participate in the LGBT Center Recovery Program and attend meetings at the LGBT center. Dating is still in the horizon but has not been a priority.

I don’t write about my addiction and recovery as often as I should. 12-step fellowships like Crystal Meth Anonymous (CMA) have saved my life. A lot of that is about helping other addicts. I’m glad to hear you’re helping other people, too.

Thankfully my job helps me assist others fighting addiction by trying to get them to join one of our studies. 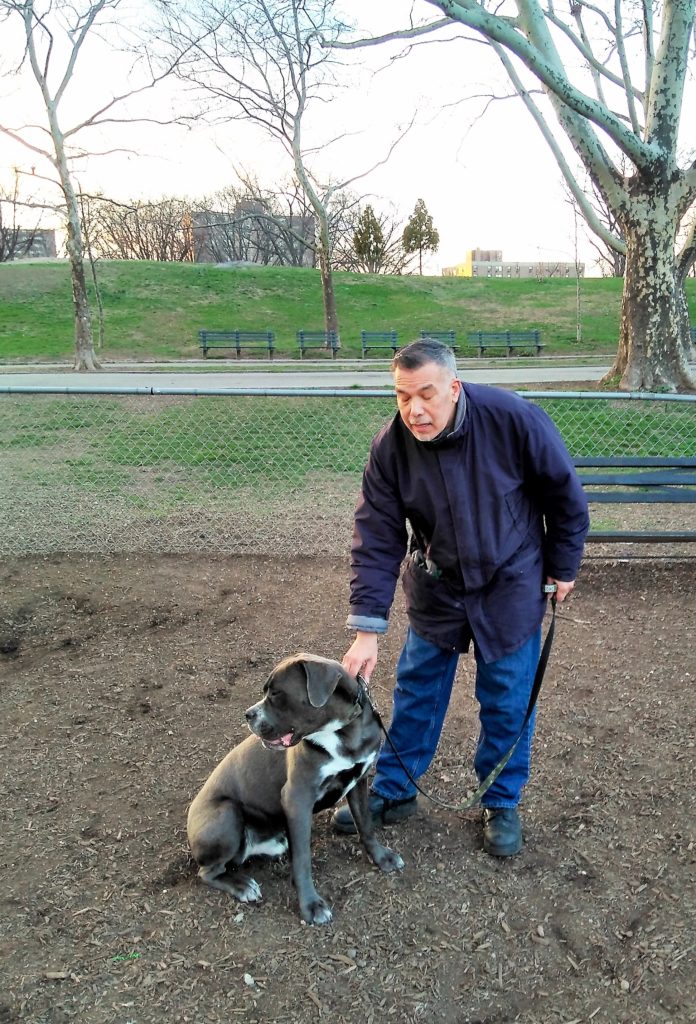 Gabriel Torres with his dog, Neo.

You’re working as a research assistant for the first national multicenter study of methamphetamine treatment in the U.S. Tell me about that.

The main study involves two drugs, bupropion and naltrexone combination, which reduce the cravings and are an adjunct to CMA, therapy and counseling for those who wish to reduce or quit using.

Do you see any success?

It’s a placebo-controlled study and we are blinded to who is on active drug vs. placebo, but the pilot study did show a significant benefit. Anecdotally, the combination seems to reduce cravings but nobody knows whether it will be strong enough to reduce use to warrant an FDA Indication.

There is another drug called ibudilast which is being studied in Los Angeles. And there is interest in Vyvance for meth addiction as well. It’s an amphetamine in the market for narcolepsy that is much less addictive than Adderall but also decreases cravings.

What are your long-term plans? Are you able to practice medicine again?

I’ve started a process to recover my medical license. It’s going to take several years and must wait until I’m done with parole and probation. In the meantime, I will continue pursuing research endeavors.

I’m glad you are on the other side, of so many things, Gabriel. And I hope anyone out there who is having a problem with meth or other drugs, or knows someone who is, will reach out for help. It’s there for the asking.

I’m trying to be realistic as I’m also approaching retirement age but still feel healthy enough and am compelled to do more, whether in research, industry, advocacy or education.

Thanks for playing a role in the community again. And welcome back.