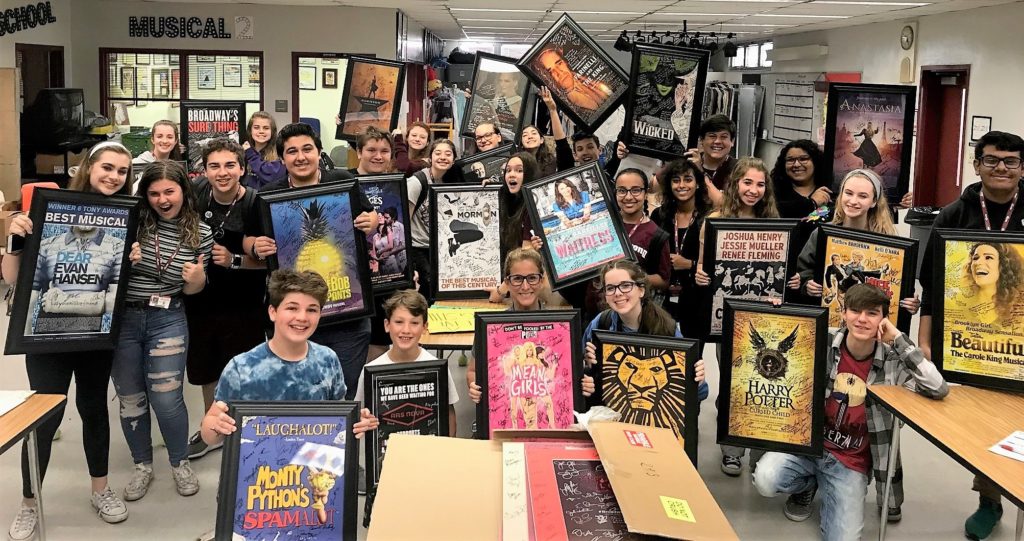 As a longtime fan of the work of Broadway Cares/Equity Fights AIDS (BC/EFA), the charity that has laser-focused their time and resources on the impact of HIV on New York’s theatrical community, I was incredibly moved by their recent outreach to the students of Stoneman Douglas High School in Parkland, Florida.

It might be easy, in the politically charged aftermath of the shooting there, to forget that these are kids who have endured an unspeakable tragedy. That hasn’t been lost on Tom Viola, the Executive Director of BC/EFA, who arranged for the theater students of the high school to receive a very special care package from the Broadway community.

As a former high school theater geek myself, I cannot imagine the excitement of receiving such a gift, under any circumstances. The fact that Viola reached out in loving support in the best way he knows how, well, I’m awash in soggy weeping.

Below is the message that Viola sent to his Board and staff about the gift. I’m sharing the entire note because I could not tell this inspiring story any better myself.

Soon after the tragic shooting at Stoneman Douglas High School in Parkland, FL, BC/EFA reached out to the Broadway community to gather a collection of signed show posters to be sent to the school’s Fine Arts department. We had heard from Melody Herzfeld, director of the Drama Department, that students were having a difficult time returning to a school that had just been marked by the police as a crime scene.

So, we gathered and shipped nearly two dozen signed show posters with special messages from the Broadway community – as well as a few vintage leftovers from last September’s Flea Market, hoping that these colorful souvenirs might lift their spirits as they move forward. Here’s the photo I just received today from these brave, smiling high school actors and techies! And a note from Melody:

“The feeling here at our school is unimaginable… there are no words. Our Broadway family is covering us in a cape of love and protection and we are so grateful of that.

“The signed posters arrived! The Broadway community’s generosity is unbelievable. I wish we were writing under different circumstances. But the kids are strong. Kids are tough even when they are crying. They will focus on their art and will ‘sing’ louder any who would do us harm. But as you can see from this photo, they loved receiving these posters! There were cheers, screams of delight and some happy tears.

Thank you and God Bless.”

My thanks to stage manager Amy Steinman for first connecting us with Melody Herzfeld and the “drama kids” at Stoneman-Douglas. We done good.

One of the great satisfactions of the HIV community having built agencies and services over the years is when we are able to share these gifts with those who are going through traumas of their own. My gratitude and admiration for BC/EFA has grown, once again, enormously.