Can Gay Men Dial Back on Sex Until Our Monkeypox Vaccinations?

Previous Next
Can Gay Men Dial Back on Sex Until Our Monkeypox Vaccinations? 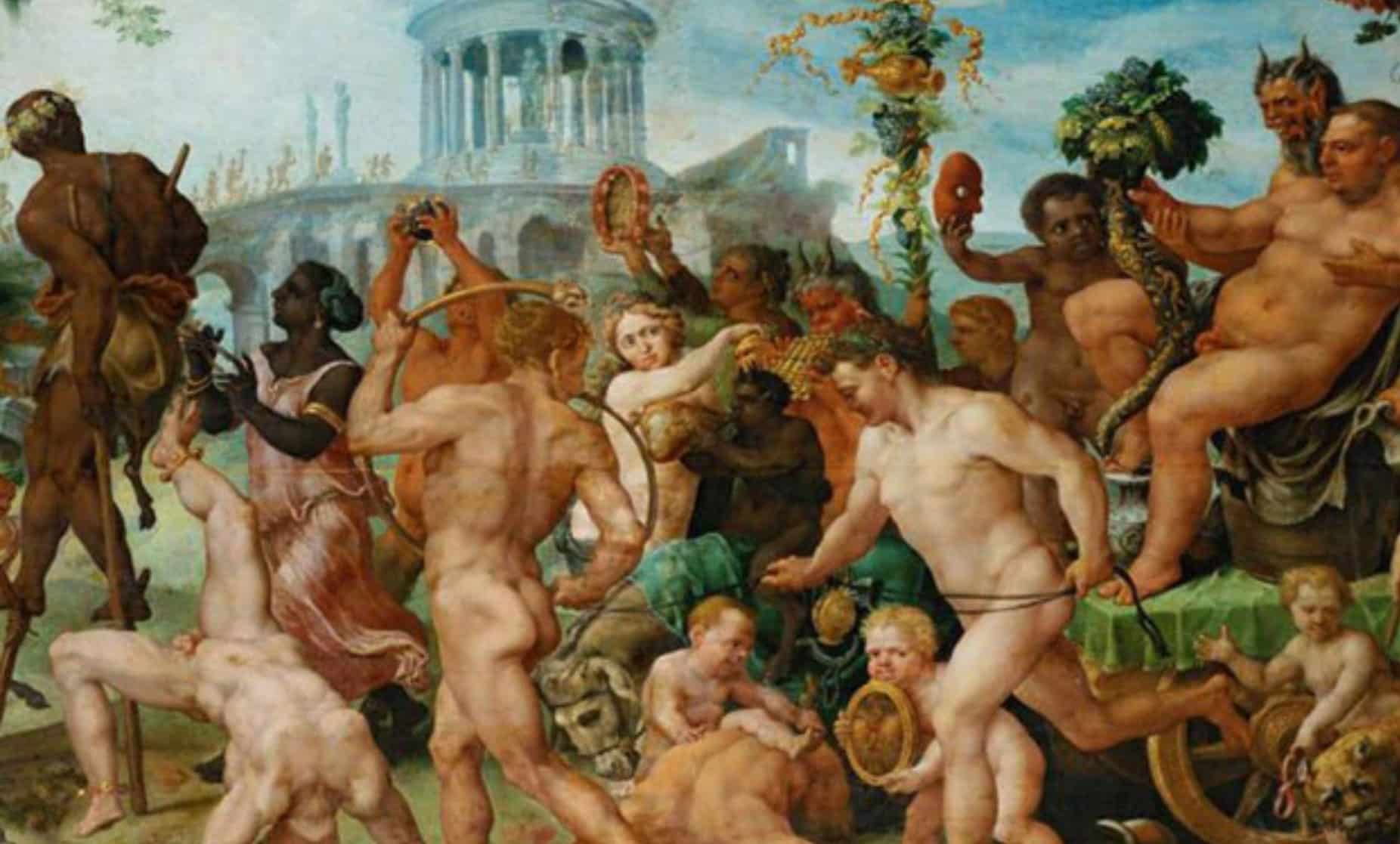 Years from now, there will be gay men who made it through a case of monkeypox who will have the scars up and down the shaft of their penis to prove it. Let me repeat that. Scars. On their cock. For the rest of their lives.

I don’t think there’s a derma-peel that will take care of that, guys.

And that leads this sex-positive long-term HIV survivor to a delicate and politically fraught question: how willing are we as gay men to hit the pause button on our more prolific sexual adventures until there is a sufficient supply of vaccinations to quell the monkeypox outbreak in our community?

No less than one of the most “sex-positive queer activists and self-proclaimed proud sluts you’ll find on social media,” iconic AIDS activist Peter Staley, recently took to his Facebook page to ask his fellow gay men to decide for themselves whether a sex break might be worth it.

“Given that we’re going to see a rapid increase in Monkeypox vaccine supplies over the next 2-4 weeks,” Staley wrote, “I’m going to hold off on hook-ups and anonymous sex until I get my appointment (and then wait a few weeks more for the priming of my immune system).”

Public health officials reassure us that vaccines are due to flood the marketplace along with outreach that will, hopefully, target the “men who have sex with men” who need them. We can reasonably expect a much larger supply of available vaccines within the next few weeks.

But what to do in the meantime? Large gay gatherings, parties, and sex venues have continued with only a few exceptions. Queer vacation destinations are firing on all cylinders. True, it isn’t the parties or gathering places themselves that spread the virus, but the general atmosphere encourages expressions of sex in impressive numbers.

We needn’t debate the messaging any longer. Monkeypox is a gay thing right now, in this country. It is traveling most commonly through sex because sex is such an efficient behavioral vector for transmission. It’s no wonder the most painful lesions are located on the genitalia and anuses – inside and out – of gay men.

So, allow me to rephrase Staley’s veiled challenge: are you willing to dial back on dick until you can be vaccinated, and then take a few more weeks off the booty bandwagon in order to build the necessary immune response? You could even start the clock after your first shot (the current vaccination requires two, but an effective immunity is reportedly built after the first one).

Are you willing to do this? Can you skip the next big party, put off the sex club, or otherwise take yourself out of the fast lane for a few weeks? Are you willing to encourage your gay friends to do the same?

I’ve been writing about life as a sexually active gay man for the last forty years. I remember debates about closing the baths during early AIDS, and how important our sexual identity is to us. I remember sex as an act of defiance – and desperation – during the most murderous years of HIV/AIDS.

I also remember, very well, activism godfather Larry Kramer beseeching us to keep it in our pants doing those years, to little avail. Having such a similar request today feels like a Sisyphean task. But this time the task is an episodic one, not meant to challenge our sexual outlaw status or our right to a good time. It has an endpoint. It has a purpose that will make life, and sex, so much easier for us in the near future.

There are sensitive ways to make the point about our need to be sexually circumspect during this time, and then there are terrible ways. For the latter, I give you Exhibit A, a horrific article in the LGBTQ paper, the Los Angeles Blade, that described gay men hanging around playgrounds after dark in order to have anonymous group sex. Truly, the article might have been produced by conservative media during the Anita Bryant “homosexuals are after your kids” fear-mongering of 1977. 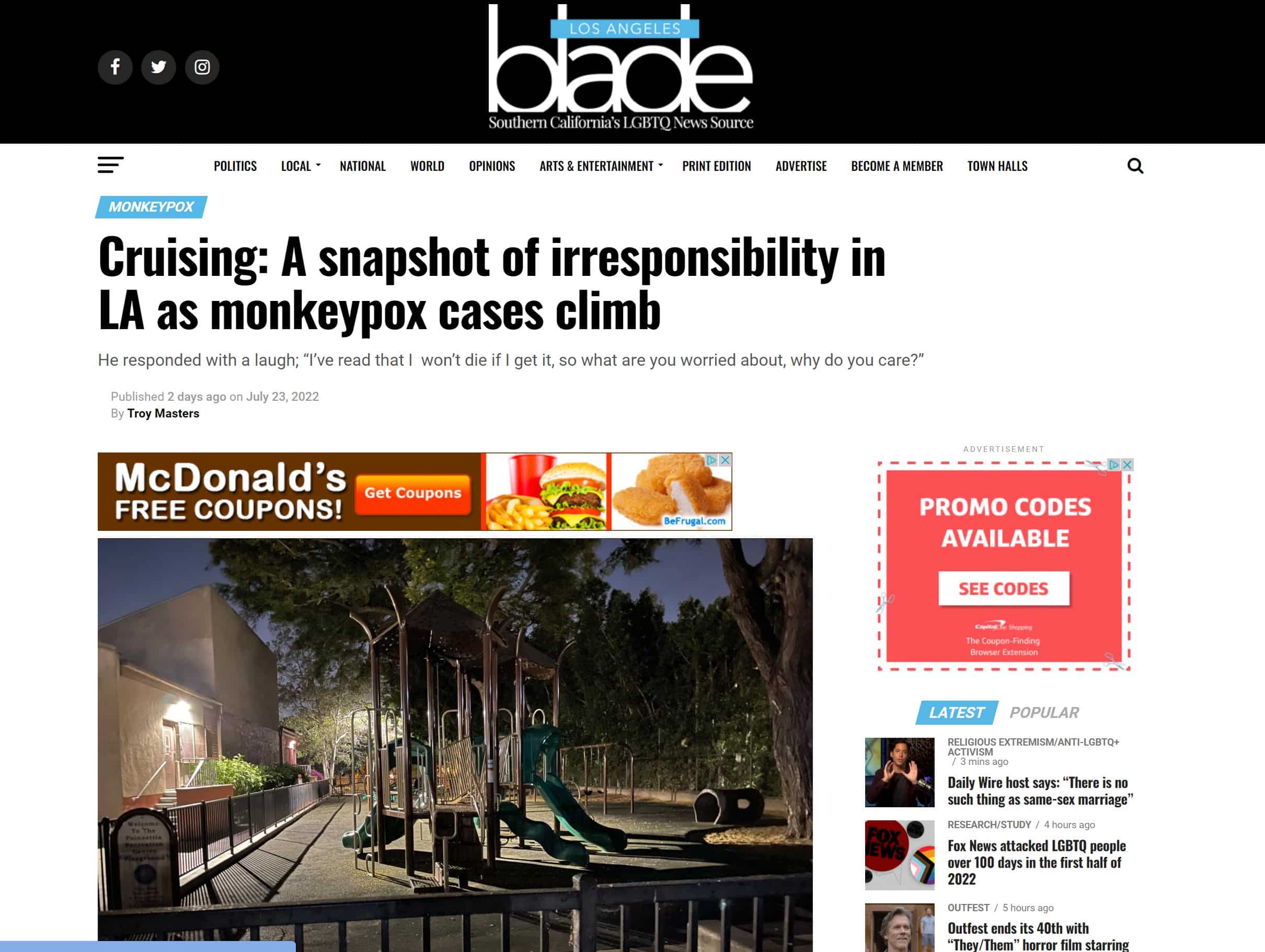 After 1,000 words devoted to what total pervs gay men are (including illustrating the article with a photo of a darkened playground at night, the article then provides, rather jarringly, helpful hints about monkeypox and limiting your sexual partners. Um, thanks? I cannot bring myself to provide a link to the piece, sorry.

Last year, I posted a take-down of the criticism of “blaming the Fire Island gays” for being the villains during COVID. In a world of rallies and massive concerts and other super-spreader events, pointing a finger at gay revelers felt misguided, if not downright homophobic. This week, though, seeing photos of boisterous gatherings of gays makes me queasy. Like it or not, this is our viral outbreak. Once again, taking care of our community is on us.

Do we have the fortitude to do it?

p.s. Get the latest monkeypox information here and here.