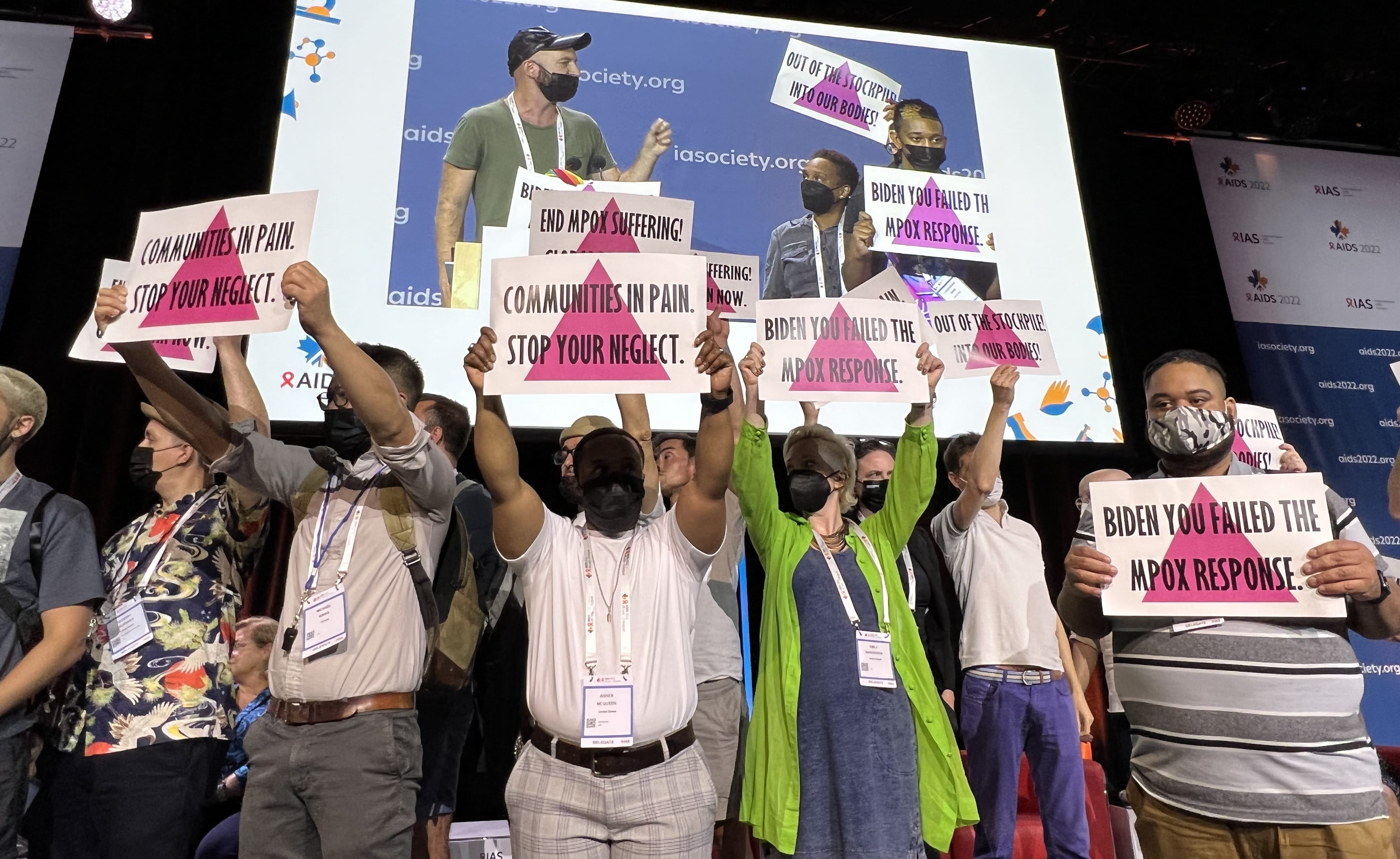 There was something more than the typical passion on display when activists stormed the plenary stage at AIDS2022 today to protest the slow monkeypox response by United States public health officials. The cries of the diverse crowd of protestors were urgent and inflammatory. Their demands felt deeply personal.

The focus of the activists’ ire was the low supply of available vaccines in the United States, and the fact vaccines that might have been used for men who have sex with men (the community most affected at this time) have been withheld.

“I’m sad to say, I feel like a refugee here in Canada,” said Asher McQueen, a trans man living in New York City, during the protest. ”I had to come all the way here to get a shot that I should be able to get in my very own city.” Montreal has already provided more than 10,000 vaccinations by setting up tents in predominantly gay neighborhoods.

“Everything for us in New York is community led,” McQueen continued. “We get no help.”

“We are facing a disease that has been present since the 1970s, and we are not prepared,” said speaker James Krellenstein, a gay man from Brooklyn who has been active in PrEP4All. “Why hasn’t the World Health Organization (WHO) formed a committee to figure out how to scale up vaccine production? We need to act now! You have an exponentially worsening outbreak that could have been prevented.”

“And Demetre,” Krellenstein said, turning to the CDC official Demetre Daskalakis sitting somewhere on the stage filled with activists, “I look forward to your presentation. The United States has refused to release the doses we need to protect our community. Montreal did it. Why can’t the United States? Fuck the racism and colonialism that allowed this outbreak to happen.”

“How many outbreaks do we have to go through to understand that global health is global? That infectious diseases are infectious?” Krellenstein shouted. “Shame on all of us for not preventing this outbreak!” Activists on stage chanted “Shame! Shame!”

After the activists relinquished the stage, Daskalakis praised their efforts, even if he didn’t answer their questions. Instead, Daskalakis focused in his presentation on the messaging of monkeypox and the CDC’s work to more specifically speak to men who have sex with men about their risks without burdening them with undue stigma.

Daskalakis did seem to suggest that new guidance from the CDC was underway, making some wonder if the CDC will join gay activists and writers who have urged gay men to put the brakes on higher risk sexual activities until vaccines are more widely available.

P.s. Check out my Twitter feed for more coverage and video clips from AIDS2022 in Montreal.