Previous Next
Did AIDS Healthcare Foundation Just Retaliate Against Whistleblower?

Only one day after a stunning whistleblower lawsuit against AIDS Healthcare Foundation (AHF) was made public, the embattled organization withdrew funding from an upcoming HIV advocacy event because one of the plaintiffs is involved in its planning, according to records obtained by My Fabulous Disease. The apparent strong-arm tactic has reached beyond whistleblower Jack Carrel and has had a “real impact” on the State-wide advocacy event, according to organizers. 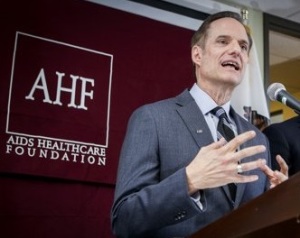 The AHF monies were meant to provide transportation for dozens of Louisiana residents living with HIV to travel to Baton Rouge to meet with their State legislators. Jack Carrel, one of the plaintiffs named in the lawsuit against AHF, is helping to organize the event.

In a voice mail to Carrel, a local AHF staffer states that Carrel’s involvement in the whistleblower case was the reason for AHF’s withdrawal. Carrel is participating in the suit alongside former AHF managers Mauricio Ferrer of Florida and Shawn Loftis of New York.

The lead counsel for the whistleblowers believes this is a retaliatory action on the part of AHF head Michael Weinstein that unfairly punishes his client and those around him. “This reaction by Mr. Weinstein is at its core indicative of what this lawsuit is about,” said attorney Theodore Leopold of Cohen Milstein. “Although on the surface they claim that people with HIV are their primary concern, when you lift the veil it is all about profitability. They end up taking this (lawsuit) out on those who are most in need of services.”

According to Leopold, there is no legal reason for AHF to stop participating in the event simply because Jack Carrrel is one of the people helping to organize it. “There is nothing to prevent them from communicating with Jack,” said Leopold, as long as they do not discuss the pending suit. No other solution to Jack Carrel being involved in the advocacy effort were offered or discussed with organizers, according to email documents and a voice mail.

The whistleblower suit claims Carrel was fired from his position as AHF’s Director of Public Health in the Southern Bureau after raising questions of financial impropriety. The suit claims fraud, conspiracy, and that AHF unlawfully acquired patients for its clinics. Having worked in the field for thirty years, Carrel has since continued advocating as a person living with HIV and was hired last year as an HIV health educator for a Baton Rouge non-profit organization.

In an exclusive interview, Carrel explained that he had been working quite comfortably with the local AHF staffer to arrange for buses to bring people living with HIV to Baton Rouge for a day of advocacy training and visits to elected officials. The event is organized by the Louisiana AIDS Advocacy Network (LAAN), for which Carrel volunteers as Chair of the Mobilization Committee.

“I met in person with the AHF staff person on Friday (March 3) and we planned it all out,” Carrel said. “She was working on identifying the bus company and making the plans for it. We were good to go.”

The AHF employee coordinated the effort with Carrel and others right up until Wednesday, April 8, the day the whistleblower suit was made public. On Thursday, April 9, Carrel received the following email from the AHF staffer:

Hi Jack,
Sorry, unfortunately at this time we, AIDS Healthcare Foundation, cannot participate in the lobby day scheduled for May 19, 2015, nor can we provide monetary resources for transportation, for May 18, 2015 and May 19, 2015. Thanks and sorry for any inconveniences.

“Hi Jack how ya doing, this is (the AHF staffer), I’ve been trying to reach you since yesterday, but unfortunately, uh, we are unable to fund the buses due to your name being on a lawsuit against AHF and it breaks my heart but, um, sorry but we cannot uh, continue to, to do that. Alright. Talk to you later, thanks, bye.”

Carrel said the AHF staffer “is a great person. She’s been active here for a number of years,” and believes she was caught in a terrible situation created by AHF management. “There are many dedicated people working at AHF,” said Carrel.

The withdrawal of organizational and financial support has left organizers with LAAN holding the bag less than five weeks before the event date of May 19.

“This has had an impact,” said Dorian-gray Alexander, the Chair of LAAN, “because we had been planning on AHF support to increase the number of participants lobbying their legislature this year. We’re working to find a Plan B.” Others involved in State advocacy declined to be interviewed, citing the risk of further impact on people living with HIV in the State.

It is not clear why AHF, if they had concerns about working with Carrel, did not work with other organizers instead, rather than engaging in a seemingly punitive action that affected the entire event and the people hoping to attend. It is also unclear if AHF will now withdraw all funds or cease collaborating with any person or agency associated with Jack Carell, something their actions suggest is entirely possible. Considering how close-knit the Louisiana HIV advocacy movement is, such a blanket blacklist could have a troubling effect.

On its web site, AHF includes legislative advocacy as one of its primary activities. That is, when they are not undermining the State-wide advocacy efforts organized in part by people they don’t like. Allegedly.

UPDATE: The Louisiana AIDS Advocacy Network has now set up a GoFundMe page to raise the funds needed to provide transportation and support for their advocacy event. I’m sure they would appreciate every single dollar they can get.