Has my AIDS crisis ended?

Previous Next
Has my AIDS crisis ended?

A few weeks ago I spent the day at the Florida AIDS Walk, and it was striking how different it was from the Walks I attended years ago. Smiling faces, racial and ethnic diversity, baby strollers, and most of all a feeling of happiness and celebration. That’s progress, right? 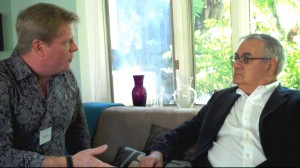 But when I speak of the AIDS “crisis mentality” being over for gay men like me, I’m treated like a heretic. I don’t mean to disrespect those who are suffering, or for the devastation that AIDS clearly continues to wreak on much of the world. But please, hear this: I lived through the 1980’s. I went to weekly funerals and lived in daily, mortal fear for my life. Friends stayed in my guest room on their way to hospice care, or simply died before making it that far. That was a crisis state, my friends, and I’m no longer living in it. The crisis, as I have known it, has passed.

In this episode of the My Fabulous Disease video series, I chat about this post-crisis mentality with Rep. Barney Frank, arguably the most powerful gay man in America. His measured response may surprise you.

The evidence of this perspective among other gay men is everywhere, for better or worse. My friends are more likely to give to the Human Rights Campaign than the local AIDS Walk. HIV tests are a casual, albeit unnerving, clinical habit among HIV negative men. And the choices gay men are making regarding safer sex, barebacking and serosorting suggest they are making those choices out of pragmatism, not mortal fear. Even the illusive HIV bug-chasers of urban legend are fading from consciousness and into the internet ozone.

Certainly we shouldn’t decrease HIV prevention efforts (for those reactionaries ready to take offense at my honest observations). But one thing I learned from my years designing prevention campaigns for gay men: our tolerance for bullshit is pretty low. Prevention advocates can’t keep screaming “the sky is falling!” to gay men for whom HIV/AIDS has become normalized, or at least far less traumatic.

Yes, we must do something about new infection rates among young gay men. I just don’t believe the answer is to play “boo!” with a monster they have lived with for their entire lives. Our young brothers deserve a more intelligent, thoughtful approach than that.