Previous Next
IT’S NOT OVER: Signorile Rejects “Victory Blindness”

On October 1, 1991, I joined furious LGBT protestors who took to the streets of West Hollywood, California. The newly elected Governor Pete Wilson, who had met with advocates during his campaign and assured them he would support AB101, a state-wide LGBT anti-discrimination statute, had just vetoed the bill. 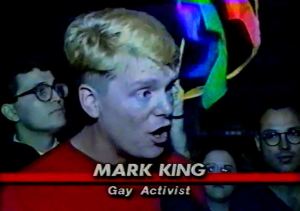 Thousands of us stalked the Governor at appearances he was making that day, burning him in effigy, chanting “LIAR!” and blasting the Governor to the media (right). We thought the State had elected an ally. What we got was a traitor.

But the controversy waned, as these things do. After a few days of raucous protests, I returned to my primary focus of AIDS advocacy. Pete Wilson weathered the storm, eventually signing a watered down version of the bill the following year, and was re-elected in 1994.

That was a lifetime ago, and the contrast between then and now would certainly suggest that things are a whole lot better for LGBT Americans. And yet, just when many gay men like me are making wedding plans and feeling encouraged by the winds of social change, a new book argues we must not settle for anything less than full civil rights and that we must reject the “covering” and “victory blindness” that has characterized our strategy in recent years.

In his book, It’s Not Over: Getting Beyond Tolerance, Defeating Homophobia, & Winning True Equality, award-winning journalist and radio host Michelangelo Signorile (left) makes a compelling argument for accelerating the fight for LGBT rights – and resisting the urge to grow complacent simply because nationwide marriage equality is within our grasp. In his first pages, Signorile offers a serious reality check:

We’re overcome by the heady whirl of a narrative of victory, a kind of bedtime story that tells us we’ve reached the promised land, that can make everything else seem like a blur. Even with the enormously positive developments (…) homophobia rages on in America, as sports stars are practically rewarded after spouting hate, as TV sitcoms still make gay and transgender people the insulting punch line, as the media respects and airs bigoted views of the “other side,” as businesses now flaunt a “no gays allowed” policy, as many workers fear coming out on the job more than ever, as federal civil rights protections seem further away than ever before, and as we are not often well served by a gay establishment that apologizes for and lauds political leaders rather than demanding action. Maybe it’s time to get rid of the bedtime story and wake up from the dream.

Signorile fears a backlash against LGBT people akin to what women experienced when a post-feminist belief that “the battle was over” led to setbacks on abortion rights and other gains women had made. This kind of “victory blindness,” Signorile writes, can crush our progress and debilitate our advocacy efforts.

Signorile is a shrewd social critic. His 1997 book, Life Outside, made quite an impression on me. It was an indictment of “the cult of masculinity” among gay men, examining the post-AIDS culture of circuit parties, steroids and dance floor drugs – in other words, everything I happened to be doing at the time. Recognizing myself on its pages made it more than a trenchant read; it was a shot to the heart. 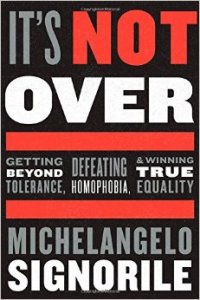 It’s Not Over takes a broader and more political view, pulling back from gay culture to the basic human right of LGBT people to live and love freely in this country. Signorile believes we are complicit in the growing threats to our civil rights because we keep settling for scraps when we should demand the whole banquet. And he isn’t afraid to call out people and organizations (you might want to duck, HRC and GLAAD) who suck up to national leaders like star-struck teens, celebrating incremental change when, Signorile contends, it is time to be bold and uncompromising.

The book overflows with wrenching tales (culled from news reports and guests interviews from Signorile’s SiriusXM radio program) of teenage suicides, unfair workplace firings, the punishing effects of “religious freedom” bills, and violence against LGBT people. The sum of these stories paints an America quite unlike the one we may think marriage equality will create.

Signorile maintains that victory blindness is lowering our guard when strong advocacy is needed most. He applies the notion to nearly every scenario of half-hearted advocacy and it is a compelling argument – including its application to the HIV crisis. The rhetoric of “an end to AIDS,” while new infections mount each year among gay men and an estimated one-third of transgender women are HIV positive, is victory blindness.

Another recurring theme in the book is the concept of “covering,” a term Signorile credits to author Kenji Yoshino (Covering: The Hidden Assault on Our Civil Rights). Signorile writes:

Yoshino defines “covering” as an attempt to downplay difference, making it palatable or at least inoffensive. Prevalent among women, members of sexual and racial minorities, and disabled people, covering becomes particularly strong, Yoshino argues, when people believe they have achieved the rights and recognition they’ve sought, and begin to fear losing them (emphasis mine). It’s an attempt to fit in and be “team players” under the assumption that the playing field is now even (…) I would argue that, by pleading for more magnanimous treatment of our opponents, gay thought leaders were unconsciously applying the covering demand to the LGBT equality movement as a whole.

Throughout his book Signorile calls out the practice of covering and his strong case becomes easy to apply to our own lives. When we try not to rock the boat by not insisting on legislation that might actually protect us once and for all, when Mitchell & Cam engage in a relationship indistinguishable from the other characters on Modern Family, when we describe ourselves as “straight acting,” or when we choose what t-shirt slogan to wear based on where we’re headed, we are covering.

Beyond the litany of personal injustices outlined in the book, I was most angered by Signorile’s painfully accurate depiction of contemporary media, where homophobic crackpots are trotted out during any discussion of LGBT issues and allowed to make ignorant, scientifically disproven statements by virtue of their representing “the other side.” Nowhere in media – with the possible exception of FOX News – would so-called experts be allowed to spout discriminatory and hateful speech about racial minorities, but the same respect isn’t granted to LGBT people. Signorile is fed up with it and his takedown of this media practice is epic.

In his proposed plan of action to address all of this, Signorile aims very high. His path forward includes teaching self-defense (a practical and self-esteem tool that has served women well but has been largely ignored by LGBT people), providing LGBT history courses in public schools to de-stigmatize LGBT people and highlight our accomplishments, and settling for nothing less than full civil rights on the federal level. “Incrementalism is dead,” he writes.

It’s Not Over will get your blood pumping, which is exactly Signorile’s point. We haven’t been mad enough or demanded enough, not in a long time.