Playing the Last Scene of a Marriage

Previous Next
Playing the Last Scene of a Marriage

“I’m not in love with you anymore.”

He said this at the dinner table as he made the first cut of his steak, a beautiful ribeye he had grilled to perfection. I put down my own knife and fork and stared at him.

“This isn’t new, or else you haven’t been listening,” he said, a bit wary of my gaze. “You knew I wasn’t happy a year ago. And we’ve just ignored it.” He took a bite and I hated him for it, for having the digestion for this. 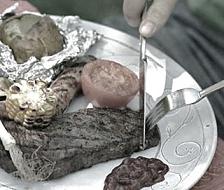 I had dropped the butter, that’s how this started. I had been setting the table and I dropped the butter and it made a mess and the dogs were licking it up and he got mad. But it was an accident so I got mad too because he always seemed angry and I told him so and then I provided a litany of complaints about his moodiness and then he sat down to start eating his steak and

and if I hadn’t dropped the butter we wouldn’t be having this conversation and I could keep pretending we were still in love with one another.

“Mark. I care about you. You know that. But this isn’t working.”

Twice, I wanted to say. Twice this hasn’t worked. In our nine years together, we had tried this twice. The first breakup was the result of my disastrous drug abuse. During our first four years together, I became an increasingly deceitful, outrageous mess. When at long last my pitiful lies were exposed and I checked myself into a drug treatment program, he ended it.

That time, that was the bang. This steak and baked potato dinner was the whimper.

I could feel the emotion swelling inside me and didn’t feel like being the first to cry, so I left the table for the bedroom. As I began heaving deep, guttural sobs I realized I was watching myself, from a distance, like a performance. I saw the way I held my body, arms wrapped tightly in a hug, knees bent from the force of the sobs. What’s my motivation? I found myself wondering, still in the midst of it. Why am I crying? How do I really feel about this?

No sooner had I asked myself these questions, tears streaming, that I posed another. And it was far more manipulative.

How should I play this, exactly?

There were so many options. The shocked and devoted lover. The vindictive injured party. The delicate, recovering addict, shaken to the core by the breakup.

I indulged in this sick game of posturing for only a moment, but it was long enough for me to spot my disease on display. It was my drug addict mindset, always looking for an angle, always trying to deflect blame or skirt responsibility or come out ahead. Despite three years of sobriety, that mindset still enjoys hijacking my emotions.

Mark, I muttered, my face wet with tears, stop it. You crazy fuck.

After the first breakup, he and I didn’t talk much. I moved back to Atlanta and, after some false starts, I finally got a foothold on my recovery. Life opened up again. I created My Fabulous Disease. I rediscovered my joy.

We began speaking tentatively to one another, then more often, and as I approached my first year of sobriety we finally admitted we still loved each other. It was such an unexpected turn of events, and so achingly romantic, that we both followed our hearts completely. I returned to Florida and we resumed our life together, minus my drug use and the dramatic sideshow that went with it.

And yet. And yet.

Within a year, we knew. We tried counseling, which only reopened old wounds and created new resentments. Something unspoken told us to stop the sessions, to not reach the finish line with so much misplaced anger. Instead, we coasted silently for another year, and we looked away.

The postscript had been written, like a paper holding an obituary for a movie star that will probably die soon. They’re just waiting to print it.

And now, despite my philosophical approach to this, my faith in my sobriety and my gratitude for my friends, I have moments when I am crushed with fear. Being alone. Starting over. Dating. And then there’s the HIV.

HIV likes giving a certain zing to relationships. It makes starting one rather tricky, what with the disclosure and the sexual negotiations and the vague fearfulness on either side. It loves ending them as well, but not always in the way you might think.

When HIV treatment drastically improved fifteen years ago, there were people celebrating the world over about their sudden renewed health and vitality. And they often marked the occasion with surprising pronouncements. “I’m going to live another thirty years,” one would muse to the partner across the breakfast table, “and not with you”

Thankfully, my HIV status had no role in the breakup. But it will surely become an issue as I navigate whatever romantic life awaits me.

I dried my face and walked from the bedroom to face him again. I knew what was true, and I held on to it tightly, unwilling to play this scene for effect or advantage. And I finally grasped what an amazing, unlikely gift had been offered to me.

We should have broken up like this the first time, I realized. It should have been this way, and now it can be.

This time, I can do this gracefully.

He was sitting at the sofa and looked up to me, sadly, hopefully, and I sat down across from him. There was a moment of mutual assessment, and we saw the truce in each other’s eyes. Some of the stress melted.

And we began to talk.